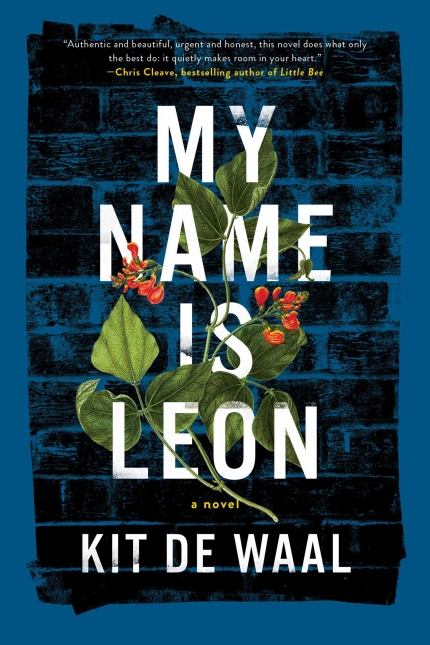 Let me start by saying you will fall in love with My Name Is Leon from the very first page. This charming story is told through the eyes of a 9-year-old who ends up in foster care and yearns to be reunited with his biological family. It is a story of love, warmth, and, at times, anger. The book’s narrative arc takes on the very nature of the family construct as it evolves in the modern world.

In her first novel, Kit de Waal — a writer whose life and work in family law have taken her through the inner workings of the British foster-care system — presents us with a story that explores race and class and how they intersect with family and friendship in a country grappling with cultural change. And all of this is accomplished in prose that is simple and beautiful.

Set in Great Britain in the early 1980s against a backdrop of economic fluctuation and the royal wedding of the century, the novel opens as Leon, whose father is West Indian, greets his newborn brother, Jake, whose father, like their mother, is white. Leon is immediately enthralled with Jake and takes it upon himself to make sure his baby brother is properly looked after. Leon’s mother, Carol, is psychologically unstable and incapable of taking care of herself, let alone two children.

Since both fathers are, for the most part, absent, and since Carol cannot fulfill her parental duties, Leon becomes the primary caretaker both for Jake and for his mother, a responsibility he takes seriously and performs as best as his young age allows. Soon, however, Carol has a nervous breakdown, and Leon and Jake are placed into foster care where, for a short time at least, Leon continues to look after his little brother.

Eventually, social services decides the boys must be put up for adoption. Jake, a typical British baby, is placed very quickly, but Leon is forced to remain in foster care. He spends his time with Maureen, a very caring foster parent, and later, when she is hospitalized with a stroke, with her sister, Sylvia.

Leon is heartbroken at being separated from his brother and mother, and spends his time plotting ways to reunite with them. Along the way, he discovers the harsh realities of racism and classism, and his anger manifests itself in filched coins, destroyed property, and stolen baby food — all in anticipation of his reunion with Jake.

Leon stores the stolen items in an empty shed he discovers in the nearby community gardens (allotments, as they are known in Britain) where he meets Tufty, a West Indian immigrant, and Mr. Devlin, an Irishman. Both are outsiders, and they take Leon under their wing.

Tufty and Devlin become father figures and teach Leon how to plant seeds and cultivate a garden, an apt metaphor for one of the major themes of the story. And, as the novel proceeds, they come to represent the two sides of Leon’s racial and cultural identity. Together, they externalize Leon’s internal conflict as he tries to come to terms with his own identity.

Tufty and Devlin have their own disagreements (some based on race) that reflect the racial conflicts happening on the streets of London. Thus, in the many dualities that occur in the novel (biracial vs. mono-racial, immigrant vs. native born, modern vs. traditional family), microcosm and macrocosm mirror each other, adding layers of complexity to what, on the surface, is presented as a simple story.

My Name Is Leon is written in prose which emulates the language of a 9-year-old and somehow navigates seamlessly between present and past tense. It is a novel that is well worth reading and one that tackles issues relevant to today’s world. Put this one at the top of your list.

Mike Maggio is the northern regional vice president for the Poetry Society of Virginia. His novella, The Appointment, will be released in May 2017. His website is www.mikemaggio.net.