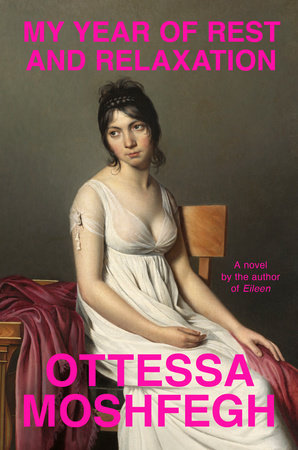 We all have days when we just don’t want to get out of bed and face the coming day. The nameless narrator of Ottessa Moshfegh’s novel, My Year of Rest and Relaxation, doesn’t just want to stay in bed for the day — she wants to stay in bed for an entire year. And not to watch lame 80s videos or have sex with her horrible lover, as has been her wont.

She wants to be totally unconscious.

“I had started ‘hibernating’ as best I could in mid-June of 2000. I was twenty-four years old. I watched summer die and autumn turn cold and gray through a broken slat in the blinds. My muscles withered.”

Fortunately, she has enough money to take a year off. Unfortunately, she inherited it from a father who “had been eaten alive by cancer,” and a “bedroom drunk” mother who killed herself. It is her unresolved grief and the trauma of growing up with dysfunctional parents that torments her into self-medicating with “upwards of a dozen pills a day,” an amount that increases to a ridiculous litany of dosages as the story progresses.

In order to get those pills, she visits Dr. Tuttle, a mad psychiatrist who can never remember the details of the narrator’s life but is a whiz at prescribing all manner of psychotropic meds and getting insurance to pay for them:

“So I filled prescriptions for things like Neuroproxin, Maxiphenphen, Valdignore, and Silencior and threw them into the mix now and then, but mostly I took sleeping aids in large doses, and supplemented them with Seconols or Nembutals when I was irritable, Valiums or Libriums when I suspected that I was sad, and Placidyls or Noctecs or Miltowns when I suspected I was lonely.”

All the pill-guzzling gets in the way of her job as the front-desk girl at a New York City art gallery and her friendship with the insecure and bulimic Reva. Her carefully curated world begins to collapse when she gets fired for sleeping too much, her VCR breaks, her narcissistic lover finds a real girlfriend, and Reva’s mother dies.

Dr. Tuttle comes to the rescue with Infermiterol, a powerful drug that knocks her out for three days at a time, though instead of sleeping, she’s sleep-living. Like some sort of zombie, her mind is gone but her body lives on.

She realizes that she’s living a parallel life on Infermiterol when she comes to on a train, wearing a white fur coat. She’s on her way to Reva’s mother’s funeral, flowers in hand. “One Infermiterol took days of my life away. It was the perfect drug in that sense.”

Turns out, she’s living the giddy life of an art-scene socialite and has become the muse of a creepy artist whose taxidermied dogs are a hot commodity on the art market. In reality, she scorns the Asian-American artist (Asians get little respect from the narrator), but in alternate-reality, she is the willing subject of his next show, “Large-Headed Pictures of a Beautiful Woman.”

On the surface, the narrator has it all. Her beauty is compared to that of Faye Dunaway and Kim Basinger. She’s wealthy, with an apartment on the Upper East Side, and educated, a graduate of an Ivy League school. She’s the very apotheosis of the American Dream.

But, there is the issue of her mother, who “could make me feel very special, stroking my hair, her perfume sweet and light, her pale, bony hands cool and jangling with gold bracelets, her frosted hair, her lipstick, breath woody with smoke and stringent from booze. But the next moment she’d be in a haze, distracted, suffering from some grave fear or worry and struggling to put up with even the thought of me.”

Her mother is relentlessly critical, pointing out her skin blemishes and the sweat stains under her arms. The narrator notes, “We got along best when we were asleep.” So it’s little surprise when her mother tells her, “You know, when you were a baby, I crushed Valium into your bottle.”

Then there were her parents’ gruesome deaths that came only six weeks apart and the ensuing survivor’s guilt:

“I’d feel sorry for myself, not because I missed my parents, but because there was nothing they could have given me if they’d lived. They weren’t my friends. They didn’t comfort me or give me good advice. They weren’t people I wanted to talk to. They barely even knew me.”

All the emptiness and drugged-up ennui might be a little much if it weren’t for Moshfegh’s trenchant critique and chromatic prose. It is the beauty of her writing and the archness of her observations that keep the reader invested in the narrator’s sorry plight up until the very end.

After her year of pharmaceutical amnesia, it seems as if our narrator might get her happy ending. She symbolically divests herself of her parents’ toxic legacy by selling their house. She reconnects with Reva, making a sincere effort to be a good friend. She appreciates art, nature, and kindness. “Pain is not the only touchstone for growth, I said to myself.”

Ah, but this is not a simple coming-of-age tale. The ending is abrupt, brutal. It says nothing and everything about our narrator’s future, which we realize with horror, is our own as well.

Hell of a Book