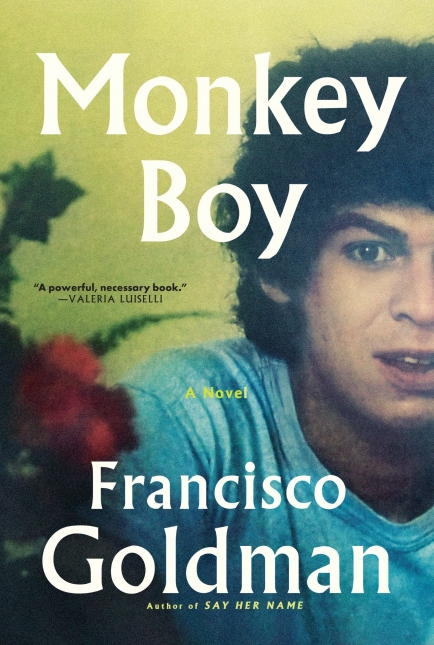 Francisco Goldman’s semi-autobiographical Monkey Boy is built on his main character’s remembrances spanning many years, nations, and relationships that, taken together, present to the reader a life full of regret and passion, pride and shame. Goldman uses protagonist Frankie Goldberg’s three-day journey to visit family and old friends to create a world that encompasses so much more.

Like Frankie, Goldman is an author made up of many parts. Part Catholic and part Jewish, part American and part Guatemalan, he has invented in this novel a universe that allows his character and himself to explore what it means to be a whole person when so much of one’s “self” is divided.

As noted, the conceit that launches Monkey Boy is Frankie’s weekend visit to New England to see his mother (confined to a nursing home), his sister (from whom he is not quite estranged, but to whom he is not close), and other women who have played a significant role in his life and upbringing.

Twice, Goldman mentions Proust, which is apt, because much like Frenchman Marcel’s, Frankie’s memories are triggered by travel and the resulting sensations that envelop him. Even a long weekend can spark a lifetime of recollections.

The travails of Frankie’s family are the novel’s greatest strength. When Frankie is young, his mother and his sister, Lexi, bear the brunt of his father’s physical and psychological abuse. Frankie himself is repeatedly beaten until he grows big enough to best his father. His mother and sister endure the emotional torture of a man incapable of showing love.

Goldman acknowledges the isolating effect such abuse can have on its survivors. While one might expect fellow victims to come together, they more often grow apart, embarrassed by their inability to put a stop to the pain.

He also effectively examines identity and the secret shame we carry when we cannot lay clear claim to one faith, race, or nationality. Frankie is abused by classmates and mocked for his “simian” appearance (hence the book’s title) that is the result of his mixed Jewish and Guatemalan heritage.

Even professionally, he is unclear how to position himself. While he presents as Latino in his writing and uses his full first name, Francisco, in his work, he also embraces his Jewish surname. This leads to one humorous exchange when a reporter tries to play “gotcha” by accusing Frankie of faking his Latino ancestry. Frankie replies:

“I admit it. I am Jewish, and all these years I’ve been hiding my true identity behind the last name Goldberg.”

Monkey Boy is not just a novel of identity, however. Goldman also dives deep into the corruption and terror caused by the Guatemalan Civil War, which started in 1960. Frankie’s mother served as a secretary to the Guatemalan consul in the United States around the time the CIA helped overthrow the Guatemalan government (to protect U.S. business interests there). This led to her being suspected by countrymen of being a communist sympathizer.

Frankie himself has made his name as the chronicler of the murder of a Guatemalan bishop by the U.S.-backed military regime. Over the course of the weekend depicted in the novel, he receives further information that current political candidates in his native land were intimately involved in such terror. Like family and race, politics has a way of stalking us throughout our lives.

These more powerful themes save Monkey Boy from becoming just another “men without women” tale. To be sure, the reader is treated to a rundown of Frankie’s many girlfriends. He schedules a dinner with an old high school crush, reminisces over his college love, reflects on women he has met while traveling, and deliberates on the meaning of his current relationship.

Yet this is no list of conquests. Instead, we see Frankie reflecting on the pivotal role women have played in his life, providing him safety and succor over the years. They have helped soften the isolation and loneliness he experienced first as an abused child, later as a wandering writer detached from close relations, and always as a racial outsider.

Indeed, it is that sense of persistent loneliness that drives the narrative and gives it its poignancy. Thanks to Francisco Goldman’s skill, we are compelled to recognize Frankie Goldberg’s melancholy and allow it to wash over us.

The Truth about My Success