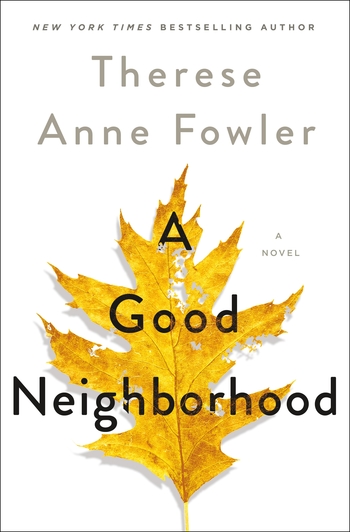 Desire and conflict are at the heart of Therese Anne Fowler’s agenda-driven A Good Neighborhood. The clearly ironic title belies Robert Frost’s well-worn aphoristic observation that “good fences make good neighbors.” It is more than a wall that needs mending in the shady suburban enclave of Oak Knoll, North Carolina.

Trouble is apparent from the start, when an unidentified plural voice declares — in the manner of a Greek chorus — “We never wanted to take sides.” This apparent collective viewpoint observes that the old “neighborhood [was] still maintaining its tenuous peace, a loose balance between old and new, us and them” until a “small event” changed everything. This fatuous voyeur returns several times to make obsequious comments about the ongoing dramatic actions.

The Alston-Holts and the Whitmans are the beleaguered recipients of those lilting diatribes. They share property lines that need a common boundary because of an ancient “massive eighty-foot oak” that is the source of a “root disruption.” The deep-seated connotation here is a groaner.

Everyone in the town carries an invisible label on a sign around their neck. Valerie Alston-Holt, 48, a professor of forestry and ecology, is a person of color (with Haitian forebears), the widow of Tom Holt-Alston, a young white sociology professor at the University of Virginia.

Their 18-year-old son, Xavier, with extraordinary classical acoustic guitar skills, is soon to graduate high school and head off to the San Francisco Conservatory of Music on scholarship, taking with him the descriptive burden of being “the child of a white man and a college-educated black woman, being raised in a middle-class household.”

Their neighbor, 46-year-old Brad Whitman, is an infomercial celebrity, a gregarious white “man-child with money” who swigs beer beside his pool in “trendy on-brand swim trunks.” He invented and patented “some gadget or part of an HVAC system” that he sold to a big manufacturer, gaining him millions. He rarely introduces himself without attaching “Whitman HVAC” to his name.

That new money allowed him, his subservient wife, Julia, their 7-year-old daughter, Lily, and his 17-year-old stepdaughter, Juniper, to build a McMansion next to Valerie and Xavier, thus ruining the neighborhood and setting off more than an ecological disaster.

The plot thickens quickly in the sweltering heat and humidity. That community over-voice alerts readers from the start that nothing good is likely to come of the liaison. When “the funeral takes place, the media will speculate boldly on who’s to blame.”

That’s not a spoiler. The reader has to wait until near the end to learn whose funeral it is and how the death occurred. A Good Neighborhood is neither a police procedural nor a legal thriller. It’s more of a cautionary tale of tragedy foretold.

But discontent begins before the Whitmans even move in. Valerie endures more than eight months of the noise and commotion of “air compressors and nail guns and saws, [and] the drywall guys blasting their music all day long.” The breaking point is the pool and the required safety fence that surrounds it. Valerie worries about the “further disruption of her tree’s root systems that would arise from the digging.”

That soon becomes the least of her worries. Xavier and Juniper’s dalliance escalates. Business and sexual secrets are exposed. There are false accusations of assault and rape. Legal and political shenanigans embroil both families. Claims for environmental and emotional damages run high.

The novel wants to be about the explosive clash between class and race. But it is more about navigating a faulty criminal-justice system.

A Good Neighborhood is noteworthy but flawed. It attempts to deal with the hot-button issues of these divided times in hopes of finding ecological and social harmony. It might have been a stronger novel if that fence had been built at the beginning. The healing could have started then.

Instead, to turn another Shakespearean phrase, for want of a tree a life is lost. Manipulating characters to serve a tired plot (with forced literary references) does little to provide the catharsis promised by the story’s opening chorus.

The rich imagery and descriptive language in this debut novel will transport readers to life in 1990s Nigeria.