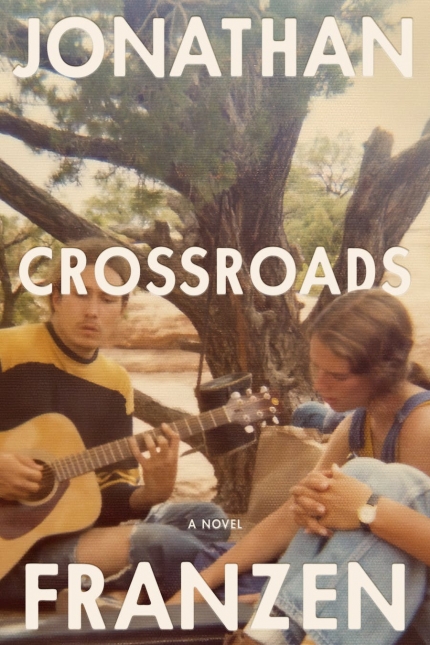 When I was a child, huddled in a church pew with my parents and sister on a Sunday, my mother would catch me gawking at a family with unkempt teenagers who displayed all manner of social disdain. They were punks dragged to a holy tea party. She would lean over and whisper into my ear, “Stop staring at them. Can’t you tell they have issues?”

But I couldn’t stop. And I imagine anyone who picks up Jonathan Franzen’s latest novel, Crossroads, will have a similar feeling. Franzen’s fictional family, the Hildebrandts, has so many issues (neuroses, sexual hang-ups, religious quirks, drug addictions), the author has said it will take more than one book to cover everything. Crossroads, therefore, is the first of a trilogy. Get ready for a massive national comeuppance as Franzen holds a mirror to the Great American Dysfunction of the past five decades.

It’s not pretty, but it’s one hell of an interesting and telling ride.

That ride begins in a chilly church parking lot before Christmas (the novel is centered around Advent and Easter). The church, First Reformed, is located in a Chicago suburb known as New Prospect, where Russ Hildebrandt, the family patriarch, is a minister with a crush on an attractive parishioner in her late 30s.

It’s the early 1970s, and Russ, who has four children and an increasingly distant wife, is straddling the line between relevancy and cultural and religious obsolescence. He wants one last shot at virility, and he’s found it in the flirty Frances Cottrell, a widow. To sleep with her would be the carnal apotheosis he’s been waiting for.

The good minister’s office is adorned with images of bygone glory from a time when he was infinitely cooler: posters of Charlie Parker, a framed photo of Paul Robeson, a blown-up image of himself and two Navajo friends on a church retreat in 1946 (Russ was a conscientious objector during World War II).

The office also holds old 78 rpm records of jazz and blues greats, something Russ wants to share with Frances, who feigns interest in these ancient anthems of angst. She’s also stuck in the backwash of America’s cultural revolution: too young for the minister’s musings about pre-war causes and too old for the hippies who populate the church’s youth group known as Crossroads.

The group is led by Rick Ambrose, with “stringy black hair and the glistening Fu Manchu.” Russ hates Ambrose for his youth and his unbridled kumbaya approach to faith. Franzen contrasts the young minister's office with the one occupied by Russ:

“[Ambrose’s space had] walls and shelves bedecked with crudely painted effusion of his young disciples, the special meaningful rocks and bleached bones and wildflower necklaces they’d given him, the silk-screened posters for fundraising concerts with no discernable relation to any religion Russ recognized.”

Ambrose is the Van Morrison to Hildebrandt’s Frank Sinatra, and everyone, including the minister’s teenage kids — Clem, Becky, and Perry — knows the old man’s time has passed. It may not happen right away, but eventually, a child comprehends the humanness and faults of his parents. The curtain of godliness becomes torn.

Russ has it coming, and his older children each have their own reasons for hating their father. (Fourth child Judson, who’s still in elementary school and inserted in the novel as the lone angel yet to fall, serves as an echo of the goodness the family once possessed.) Clem, the eldest, is a college freshman who hastily writes to the draft board to erase his student deferment from military service; he wants to go to Vietnam to thumb his nose at his draft-dodging father.

“He no longer respected the old man,” Franzen writes of Clem. “Having glimpsed his fundamental weakness, he now saw it at every turn.”

Becky is the high school glam queen in love with a James Taylor wannabe who sings folk-rock songs during weekly group gatherings at the church. Her rebellions (smoking weed, forgoing college, getting pregnant) are the most cutting, given her early trajectory of family stardom. Perry is a high school sophomore who possesses an outsize intellect to match a similar lust for booze, pills, weed, and, eventually, cocaine.

This troubled kid is purely the product of his mother, Marion Hildebrandt, the novel’s most alluring and complicated character. When the story opens, we see a plump minister’s wife in her fifth decade. She’s a dutiful, doting, and slightly nagging mother and a good spouse, rewriting Russ’ sermons and enduring dinner parties with fatuous senior members of First Reformed Church.

But Marion has a secret. In a brilliant stretch of dialogue with her women’s-lib-leaning therapist (whom Marion is seeing on the sly), the dowdy hausfrau reveals that she lived a femme fatale life in Los Angeles before meeting the virginal Russ. In fact, she had a long affair with a married man, got pregnant, had an abortion, and was institutionalized for a psychotic episode. The portrait Franzen reveals of this time period is at once brazen and heart-wrenching.

“The person I see isn’t good,” Marion tells her therapist. “Really? You’ve raised four great kids. You’ve given your husband as much as any man could deserve,” the therapist responds, asking Marion to describe how she really sees herself:

“She’s thin. She feels everything intensely. She’s a sinner, and she’s honest with God about that. She hopes He understands that sinning is inseparable from feeling alive, but she doesn’t care if He forgives her, because she’s not really capable of regret.”

All of this is declared before Marion takes up smoking, loses weight, and heads to the West Coast to find her old paramour for a weekend fling in an attempt to feel whole again. Or at least human.

Critics have often pointed out that Franzen’s characters (such as in The Corrections or Freedom) seem incapable of change; these detractors will likely argue the same thing about the souls in Crossroads. But perhaps they’re confusing character evolution with characters fully understanding themselves. Trust me, the people in Crossroads are hopelessly and sometimes painfully self-aware.

Do they grow? Perhaps the better question is: Do they — do we — gather each day’s mental debris and haul it along forever, its weight increasing unfathomably? Or do they let things go, thereby forgiving and freeing themselves?

Jonathan Franzen doesn’t deliver a cliffhanger here. Instead, he brilliantly reveals the many complicated layers of each character’s life amid the untidiness of a family confronting a new cultural age. I want to know how these misfits will respond to the Watergate era and, later, the greed-is-good 1980s and beyond. Imagine the debris these periods will create. Better yet, imagine the family lore told over and over by its members as something close to truth.

Michael McCarthy is the editor-in-chief at Modern Luxury Media, overseeing markets in DC and San Francisco.