The affecting, uneven story of a trailblazing actress. 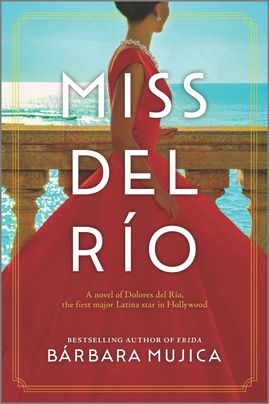 Bárbara Mujica’s Miss del Río begins with a gripping scene: It’s 1910, and the family of a wealthy Mexican banker is hiding from revolutionaries as they invade homes in Durango. Lola (Dolores), the young daughter of the family, is confused and frightened by the hushed voices of the adults and by the intruder in her bedroom, who spits on her and smashes the porcelain Virgin on her nightstand, hissing, “Viva Pancho Villa!” Ultimately, Lola and her mother escape and flee to Mexico City.

Mara, the novel’s narrator, also escapes from Durango as a little girl, but she doesn’t come from wealth as Lola does. She’s an orphan cared for by a seamstress she calls Tía Emi, who tells Mara she is not her real aunt and refuses to reveal who Mara’s mother is. At 4 years old, Mara picks up scraps of cloth to earn her keep and eventually graduates to making “simple stitches. Before I knew the rosary, I could make flowers on cloth…Those petals were the only beautiful things in my life.”

Once in Mexico City, Mara meets Lola at the home of Lola’s cousin, who turns out to be Mexico’s president, Francisco Madero. Tía Emi works as a servant for the Madero household and is tasked with dressing and caring for 6-year-old Lola. Confused, Mara asks, “Why can’t she dress herself?...And why does someone need to stay with her when she eats? No one sits with me when I eat.” Tía Emi responds, “She’s not the same breed as us.” A complex mix of tension and fascination develops between Mara, a light-skinned poor girl, and Lola, a darker-skinned rich girl, which persists throughout their lives.

Mujica is an accomplished writer who complements the personal stories of Lola and Mara with subtly powerful historical and cultural context. Major events of the 20th century (including the Mexican Revolution, the 1929 Stock Market Crash, and World War II) come to life through the eyes of these two Latinas. Both are impacted by racism: Lola, after becoming an actress, is typecast as the “female Valentino,” playing everything from Argentineans to Native Americans. And Mara’s Latino husband believes joining the American troops to fight in WWII will prove his loyalty and end discrimination. The pathos of these scenes is deeply affecting.

Mara and Tía Emi are the most vivid, fully realized characters in the novel despite being secondary (and largely fictional). Mara’s longings and fears are easy to empathize with, and the mystery surrounding her mother’s identity keeps the pages turning. For her part, Tía Emi is one of the most complex characters I’ve ever encountered in fiction, with her loving heart and crusty exterior. Her salty language adds welcome comic relief, as when she regularly exclaims, ¡Me cago en la leche!” (“I shit in the milk.”)

Other lighthearted moments come from the customers at the hair salon where Mara works as an adult. She doesn’t tell them she knows the famous Dolores del Río, preferring to secretly enjoy their opinions of Lola’s films:

“But Dolores del Río is Spanish! It says so in all the movie magazines.”

“Well, in the movie she’s Polynesian, and she can’t marry Joel McCrea. So she throws herself into the volcano!”

Unfortunately, the subject of this biographical novel, Lola herself, never rises above the stereotype of the narcissistic film star with a string of lovers who is blind to the struggles of ordinary people. Near the end of the book, Lola develops a social conscience, but it is too little, too late. It helps that Mara is a stand-in for the reader in the way she judges and challenges Lola, but her motivation to remain friends with Lola is never clear. Even Tía Emi tells Mara repeatedly that Lola is just using her as a “rainy-day playmate.”

Given Mara’s pragmatism and the fact that she isn’t dazzled by Lola’s fame, what is it that keeps the relationship going? The novel provides no answers, and the reader can’t help wondering along with Mara, “Lola, are we friends? Really, truly friends?”

“No, I don’t. You always introduce me as your assistant, not as your friend. And now, when I ask you for a favor…you hesitate.”

The narration and point of view are uneven and jarring at times. Some scenes are narrated from Lola’s point of view but still filtered through Mara’s perspective in a manner I found awkward and clunky — especially in scenes where Mara isn’t actually present. More conventional dual narration may have worked better.

Despite my disappointment with the representation of Lola, Miss del Río is well worth reading for the way Mujica captures the history of Mexico and Hollywood (especially the transition from silent films to talkies), and for her insight into how racism infiltrates the worlds of rich and poor alike.

Clarissa Harwood is a writing coach and the author of three historical novels, The Curse of Morton Abbey, Impossible Saints, and Bear No Malice. She holds a Ph.D. in 19th-century British literature and lives in Ontario, Canada.