Making History: The Storytellers Who Shaped the Past

A valuable appraisal of those who tell the tales. 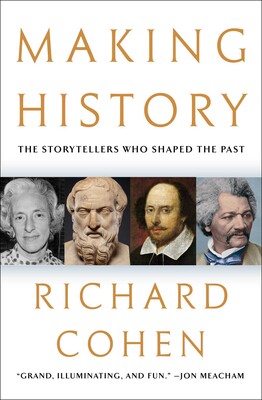 Richard Cohen, an accomplished publisher, editor, and former creative-writing professor in London, has crafted in Making History: The Storytellers Who Shaped the Past an enlightening, one-of-a-kind account of humanity’s chroniclers from Greek times to the internet age. He begins with an epigraph from E.H. Carr, “Before you study the history, study the historian,” and then proceeds to do just that to remarkable effect.

A glance at the book’s chapters reveals the enormous scope of this 10-year project. Among other things, Cohen analyzes the effect of religion on history, specifically the impact of the Old and New Testaments; the formation of the Roman Catholic Church; Mohammedanism and the Arab world; and the pushback against Greco-Roman paganism. The author also branches out from specific periods of history to explore particular schools of thought, from Lucien Febvre’s Annales School to Eric Hobsbawm’s Marxism.

He follows the trail from ancient and medieval scholars and thinkers forward to Machiavelli, Shakespeare, Voltaire, and Gibbon, all the way to contemporary historians like Doris Kearns Goodwin, Henry Louis Gates Jr., and Nikole Hannah-Jones and documentary filmmaker Ken Burns. Superior footnoting is apparent throughout.

Despite the vast array of figures, periods, and mindsets presented, Cohen argues persuasively that a single truth unites them all: Everyone who has ever recorded history was — wittingly or not — influenced by their own personal views and objectives. This was as true during the oral-history era of Thucydides and Herodotus as it was in William Randolph Hearst’s yellow-journalism age and our current world of fake news.

Concerning modern media, Cohen notes in a chapter entitled “Bad History” that newspaper publishers and booksellers alike have long capitalized on the notion that they alone were providing “realistic history,” even if it sometimes bordered on historical fiction. Of course, some countries were and are unconcerned with issues of bias or inaccuracy — look no further than Putin’s Russia — decreeing from the very top what would (and would not) be written. In the face of this reality, the author counsels patience.

“Not all the truths of the past will be uncovered, but a good number will be,” he writes. “Francis Bacon famously said that truth is the daughter of time, not of authority.”

Cohen’s well-written tome, however, doesn’t presume to be that authority. It isn’t a corrective for sketchily recorded or dubiously sourced history but a cogent reminder that “history” itself is fundamentally in the eye of the beholder/recorder/storyteller, at least initially.

Given all the acrimony, internecine academic battles, cultural biases, political calculations, and market forces that inevitably influence the “historical record,” should we abandon the quest to get things right? Absolutely not, says Cohen, who ends his work with a long quote from 19th-century American historian/author William Hickling Prescott:

“[The ideal historian] must be strictly impartial; a lover of truth under all circumstances, and ready to declare it at all hazards…He must be conscientious in his attention to geography, chronology, etc., an inaccuracy which has been fatal to more than one good philosophical history…he must display the various powers of a novelist or dramatist, throwing his characters into suitable lights and shades…He must be — in short, there is no end to what a perfect historian must be and do. It is hardly necessary to add that such a monster never did and never will exist.”

In other words, the worthwhile Making History seems to suggest, the brass ring of an untainted, wholly accurate historical record may be forever beyond our grasp. But we should keep reaching for it anyway.

Andrew M. Mayer is professor emeritus of humanities and history at the College of State Island/CUNY.

Island of the Blue Foxes: Disaster and Triumph on the World’s Greatest Scientific Expedition