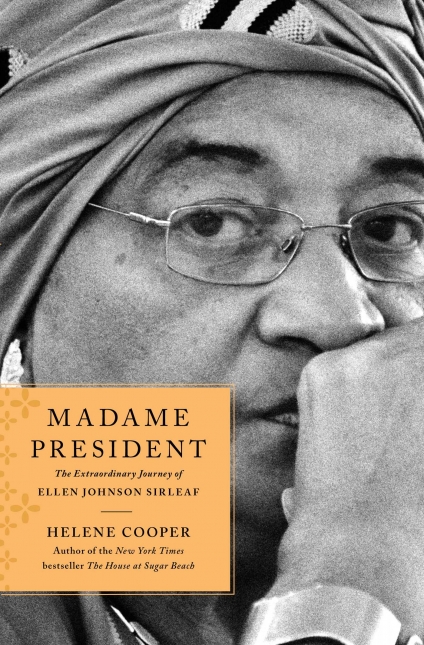 Sirleaf, the first female president of Liberia, has the bravado of Superwoman, along with the powerful intellect to operate at the highest administrative levels. She managed to survive the deadly twists and turns of Liberian politics to lead the country after her election in 2005. Among Sirleaf’s many accomplishments were the successful negotiation of Liberia’s debt reduction, along with weathering the Ebola epidemic.

Cooper frames the story of Sirleaf’s life by first describing the realm most Liberian women occupy: “A woman's place is in the market, the church, the kitchen or the bed."

Being set apart at birth by a medicine man’s prophecy — "This child is going to lead" — empowered Ellen to take extraordinary steps: She married at 17 and bore four sons by age 22. She then left her children with family to study in America with her husband.

Upon returning, Sirleaf became the head of the debt service division in Liberia’s Treasury Department. Cooper, who spent hours in conversation with Sirleaf, takes us through Sirleaf’s outstanding career working with the leaders of South American and African countries.

Sirleaf survived the country's political vicissitudes by going into exile. During one juncture, she earned a Master’s of Public Administration at Harvard’s Kennedy School of Government, and developed her financial expertise while working for the World Bank and Citicorp. She also extricated herself from an abusive marriage without ruining either her reputation or ambition.

At one point, Sirleaf is thrown in prison, and it takes nine months of international pressure to overturn the 10-year sentence. That prison stay elevated her status among the market women who went to great lengths to get her elected to the senate and then the presidency. These women, heroes in their own right, worked with grit and resourcefulness to shoulder the country's economy through dire times.

Writing about Sirleaf offered Cooper an opportunity to examine Liberia's complex history. The country was "colonized" in 1820 by 88 newly freed African-American slaves. The former slaves immediately established, "a two-tiered system with two very distinct classes." Both the author and Sirleaf are descendants of its ruling group.

Another “two-tiered” aspect of Liberia's culture is the highly gendered nature of its male-dominated relations. But the most distinguishing feature of the society is its tribal structure, encompassing "twenty-eight tribes, belonging to sixteen ethnic-linguistic groups."

Aspects of these languages appear in Liberia's English patois, a blend of British English, American slang, Creole, and African parables, which the author frequently quotes. Language, with all its baggage, became a significant signifier during the uprisings, when one’s tribe was a friend or foe to the leadership.

A seasoned journalist, Cooper gives a rigorous picture of the crony-laced governments that erupted in the 1980 coup. Her reporting skills are evident in the way she introduces the characters involved in the 13-year civil war [begun in 1989], and the many events and horrors that marked it.

"It was a war that introduced the world to children soldiers of West Africa. At the close, two hundred thousand people had died in Liberia, Sierra Leone and the Ivory Coast, and thousands of women and girls had been raped."

Cooper is currently the New York Times Pentagon correspondent. In 2009, she was a White House correspondent and a member of the team that received the 2015 Pulitzer Prize for International Reporting for coverage of the 2014 Ebola epidemic in West Africa.

A Liberian native, Cooper and her family escaped the country during the 1980 coup. In 2008, she published a memoir, The House at Sugar Beach, which documented that time and its effect on her family. The book was a National Book Critics Circle Award finalist that year.

Sirleaf, along with two other women, was awarded a Nobel Prize in 2011, "for their non-violent struggle for the safety of women and for women's rights to full participation in peace-building work." Thanks to Helene Cooper, the world can now better appreciate Sirleaf’s extraordinary role in that struggle.

Roberta Levine, an author and journalist, has written for Numerous Cinq, Allegheny Review, Pennsylvania Magazine, and other publications. She lives in northwest Pennsylvania with her family.