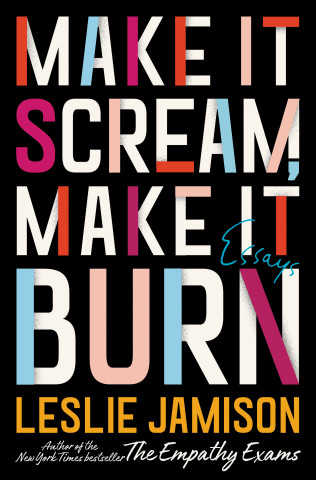 Leslie Jamison appeals to me for her gift of quiet observation. Her writing is cogent and closely observed, un-showy. Without a trace of irony, I think of her as a sober writer.

Thus, I was somewhat put off by the title of her latest essay collection, Make It Scream, Make It Burn, which struck me as overly dramatic and loud, a misrepresentation of the quietly cumulative power of Jamison’s work.

I am pleased to report that the title does not reflect the content, though I’m left to wonder who argued for it and won (my money’s on Marketing). If it were up to me, the title would have been Longing, Looking, Dwelling — the headings of the book’s three sections, and far more reflective of Jamison’s use of language and more evocative of the themes she explores.

The organization of the collection — the three sections, the order of the essays, the way each essay subtly or overtly connects to others — contributes to a satisfying unity that feels organic, no matter how fully intended.

The section “Longing” explores ways that people seek to connect with or to explain the world around them, perhaps in ways that feel alien to the rest of us (e.g., the committed human followers of a blue whale that sings on a unique frequency, making him invisible to other whales; parents convinced that their children are the reincarnations of other people).

In reporting what she finds, Jamison considers that perhaps she isn’t doing justice to the people her stories represent. In “Looking,” she dives headlong into this subject. That malaprop title comes from Jamison’s essay of the same name, which focuses on James Agee, his book Let Us Now Praise Famous Men, and the never-published article he originally wrote for Fortune magazine that served as the book’s origins.

The essay considers the damage possible in capturing and reporting stories that the reporters do not themselves have to live, a thought that dogged Agee throughout Praise, which is more about the author’s act of documenting than it is about his subjects:

“Imagine a director’s cut five times as long as the film itself, with the camera constantly turning to gaze at the face of the director himself.”

Jamison wonders about herself, worried she deserves Janet Malcolm’s criticism of journalists as “a kind of confidence man, preying on people’s vanity, ignorance, or loneliness, gaining their trust and betraying them without remorse.”

As with Agee’s constant presence throughout Praise, one could argue that self-reflection is the engine that drives all of Jamison’s essays. But her empathy is not something she puts on in order to wheedle her way into people’s confidence, and it is precisely the insights that she brings from her own experience that make her writing so thoroughly humane. Certainly, it is what draws me to her work.

On the heels of the Agee essay is one called “Maximum Exposure,” about a photographer who returns to chronicle the same family in Mexico every year for 26 years. Jamison feels that her own commitment to her subjects evaporates in the comparison:

“The ethical divide between showing up and coming back loomed large; it made me feel accused. This is respect, I thought: to look and keep looking, not to look away as soon as you’d gotten what you needed.”

On the other hand — for herself, for Agee, for Annie the photographer — “What does it mean to make art from other people’s lives? What distinguishes exploitation from witnessing, and when is that witnessing complete? Is it ever?”

And her empathy has limits. More than once, Jamison mentions a tattoo she has on her arm, Latin that translates as, “I am human: nothing human is alien to me.” It reminds her to stay open to possibilities, but she mentions the tattoo in the context of certain experiences that challenge that notion:

“Maybe I wasn’t doing anyone favors by pretending that my belief system was tolerant enough to hold everything as equally valid. Maybe there were experiences I couldn’t relate to, people I wasn’t meant to love, and things I might never believe.”

Oddly, I find that quoting from Jamison’s essays is something of a disservice to the author: Because each line weaves in meaning from everything that has come before and derives larger meaning from all that comes after, a brief quote loses the nuance that, in context, makes it pop.

Speaking of nuance and accumulated meaning, “Dwellings” represents the most personal of the essays, and tracks a lovely interconnected arc: from the absurdity of attending other people’s weddings — with or without a plus one, or as the plus one — to her growing up “in a family thick with divorces and overpopulated by remarriages”; to meeting the man she will marry, a widower with a young daughter; and, finally, to her own pregnancy and the birth of her daughter.

“The Quickening” is the final essay, in which Jamison describes herself ravenously eating her way through her pregnancy, as she recalls each stage, “When you were the size of a…” poppy seed, lentil, blueberry, lime, avocado, mango, turnip, grapefruit, cauliflower, coconut, pineapple, and, finally, “larger than a honeydew but smaller than a watermelon.”

Giving herself over to the caloric demands of pregnancy is her final triumph over her college-era eating disorder, during which she consumed almost nothing. It is also something of a test of her own ability to let go of herself for someone else. She wants to prove that she is, in fact, worthy:

“I wanted to build you from joy: summer rainstorms and fits of laughter; the voices of women in endless conversation…I wanted you to know you were built from medium-rare meat and late-afternoon light.”

During labor, the baby’s heart rate fluctuates during contractions, until finally it goes into freefall, and the entire birth team crashes through the halls to an operating room for an emergency C-section.

Jamison can’t feel or see anything below the blue drape, but she looks to her husband: “I watched his face like a mirror, trying to read your fate. It was only when I heard the doctor’s voice say, ‘Hey there, cutie pie,’ that I knew they had opened me up and found you there, ready to be born.”

This essay collection neither screams nor burns. I’ve already read it twice, and I know that I will read it again when I need an infusion of that signature Jamison observant, open-minded, empathetic humanity.

Jennifer Bort Yacovissi’s debut novel, Up the Hill to Home, tells the story of four generations of a family in Washington, DC, from the Civil War to the Great Depression. Jenny writes a bi-monthly column and reviews frequently for the Independent and serves on its board of directors. She also writes a bimonthly column for Late Last Night Books. Her short fiction has appeared in Gargoyle and Pen-in-Hand. Jenny is a member of PEN/America and the National Book Critics’ Circle. Previously, she served as chair of the Washington Writers Conference, and as president of the Annapolis chapter of the Maryland Writers’ Association. Stop by Jenny’s website for a collection of her reviews and columns, and follow her on Twitter at @jbyacovissi.com.

Anatomy of a Genocide: The Life and Death of a Town Called Buczacz

Mastering the West: Rome and Carthage at War

This lively retelling of the Punic Wars takes aim at the myth of inherent Roman supremacy.