The Smithsonian Castle and the Seneca Quarry

A unique look at one of the National Mall's iconic structures. 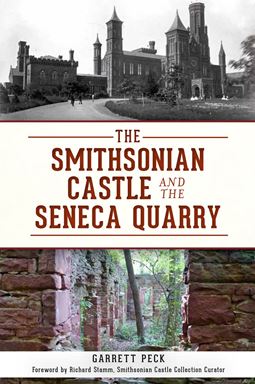 If you’re a locavore, championing sustainably produced food, or an advocate for any locally sourced goods, then Garrett Peck’s The Smithsonian Castle and the Seneca Quarry will give you a new perspective of the Smithsonian Castle — as the granddaddy of local sourcing. Seneca sandstone, the deep red stone from which the signature Smithsonian Castle was constructed, was quarried just a pleasant bike ride away, up the C&O Canal, barely beyond the Beltway. The Smithsonian Castle is not the only local building constructed with Seneca stone. Throughout Washington, DC, you will find secular and religious buildings, primarily of the Romanesque-style, that contain this distinctive stone.

Here in the nation’s capital, a city now better known for bluster than blasting, men during the 19th century wrested Seneca stone from the earth and loaded barges to float the blocks down to construction sites all over the city. If that’s not enough, the Civil War surrounded the enterprise. Unlike concrete, which is mixed onsite, and steel, which is milled at a factory and transported to a project site, Seneca stone is cut from the earth, shaped and polished and then laid piece by single piece. Given our current technology, it’s almost mind-bogglingly primitive to imagine each
piece of stone being dug, sent down the canal and then lifted by hand into place.

Peck’s book chronicles the production of this distinctive stone; the story of John P.C. Peter, owner of the Seneca quarry; and the years of construction of the Smithsonian Castle, begun in 1847. Interwoven with the history of the C&O Canal and the Civil War skirmishes raging around the fringes of the city, Peck’s compact book is an immensely readable account. He covers the history of British scientist James Smithson’s bequest that launched the Smithsonian Institution with equal attention to the brief Confederate occupation of Poolesville as well as Mosby’s Raid.

Peck offers a concise description of the idiosyncratic castle, designed by architect James Renwick, and ties it to the larger architectural history of the nation: “The castle is a stand-alone masterpiece, but equally important is the influence it had on a half century of Washington architecture. Coming at the end of the Greek Revival period that dominated American architecture from the 1820s until the 1840s, the castle marked the beginning of Victorian architecture in the nation’s capital, a period that lasted five decades until 1900.” In addition to providing a narrative about Seneca stone, Peck’s book also contains a pictorial survey of examples of Seneca sandstone buildings.

Because the inevitable entropy of the woods reclaims more of the quarry site each year, Peck concludes by advocating that the quarry be designated as an historical park, sooner rather than later. His affection for his subject shines through the book, prompting you to hop on your bike and pedal out to the ruins of the old quarry.

Ellen Sands serves as the Permitting and Code Enforcement Coordinator for Chevy Chase Village. Trained as an architect, she has written for Architectural Record and the Washington Times and has taught design at the University of Maryland.

The intertwining stories of two very different women, one a 19th-century slave, one a modern-day junior attorney, drive this debut effort that represents several genres in one novel.