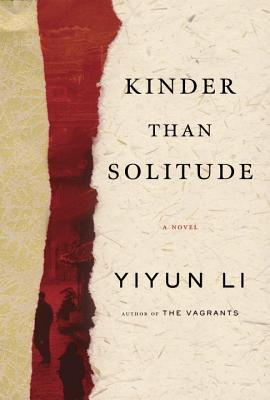 The novel Kinder Than Solitude by Yiyun Li begins with the ultimate solitude, death. Shaoai, who has lived in a semi-vegetative state since falling ill twenty-one years ago, finally expires. Her childhood friend Boyang, a successful Beijing developer, has long contributed money to Shaoai’s upkeep, keeping the relationship secret from his parents and his ex-wife. His marriage collapsed, he is a “diamond bachelor,” a rich, single businessman in a society obsessed with wealth and status, engaged in a sugar-daddy relationship with a much younger woman. A conversation with Boyang’s self-absorbed and ruthlessly elitist mother reveals that Shaoai had been poisoned by either Ruyu or Moran, Boyang’s friends from childhood, both now emigrated to the United States.

Through scenes from the characters’ everyday lives and flashbacks to their teenage years when they all lived in the same Beijing compound, the reader becomes intimately acquainted with the emptiness of their inner lives. It all starts when Ruyu, an orphan raised by two Catholic spinster sisters, comes to live in Shaoai’s home and attend the high school where Boyang and Moran, his guileless, open-hearted best friend, are students. It is only months after the 1989 massacre in Tiananmen Square. Shaoai, a university student, had been involved in the demonstrations.

Though Yiyun Li lived in Beijing during that period, she seems to have bent some of the details about life in China as it emerged from its Mao-induced isolation, apparently to make the story more accessible to her western audience. (She writes in English and her books have not been translated into Mandarin.) In a country intent on keeping its citizens obedient to the Communist Party, it is unlikely that an orphan would be left to be raised by Catholics who were not family members. In order to prevent mass migration to the cities, there were (and still are) strict residency requirements for Beijing, and even with Ruyu’s prodigious talent on the accordion, it would have been extremely difficult for her to leave her small town and enroll in a Beijing high school without some sort of political connections.

In fact, the children live in a world that seems just as American as it is Chinese. A Mickey Mouse clock sits on the bedside table while commercials for Nescafe blare from the television; bedrooms are equipped with fans that stay on all night; the friends listen to Michael Jackson and read western literature; Ruyu buys Tang from a department store. Even the tense atmosphere following the brutally quashed protest movement seems like a decorative frill, a half-baked detail that is useful to the plot.

Though these details might not be problematic for the reader who knows little about China during the late 1980s, the prose could be. The story is larded with declarative statements, sweeping in their conclusions, dramatically declaimed, but ultimately meaning little (“The crowdedness of family life and the faithfulness of solitude — both brave decisions, or both decisions of cowardice — make little dent, in the end, on the profound and perplexing loneliness in which every human heart dwells.”), nothing (“A secret that never heals makes a person, however close, a stranger, or worse, an intimate, an enemy.”), or just plain nonsense (“Time, be it old or new, lived or yet to be lived, was merely a body she carried inside her heart, its weight growing less conspicuous by the day, its coldness more acclimated to, and its possessiveness easily taken, or mistaken, for composure.”). These hand-to-the-forehead, melodramatic statements intrude mercilessly on the narrative, distracting the reader from the tale at hand.

Many of these objections might be forgiven or overlooked, but in the end, the characters themselves are so inert that the reader loses interest. The ostensible narrative tension is the revelation of who poisoned Shaoai and why. The culprit is just who you thought it was, and the motivation is disappointing and uninspired.

But wait! Maybe Kinder Than Solitude is an allegory, with Shaoai representing the struggle for individual rights and freedom which, after the brutal suppression of Tiananmen, became a catatonic patient, slowly dying, and the other three representing the Chinese today: Boyang intent on getting rich, gaining status and taking what he can from those who are less powerful; the two women leaving China to waste their talents and lives as alienated strangers in a strange land.

Yiyun Li, who grew up in China and left to study at a university in the U.S., where she has lived ever since, has said, “It’s hard because people would ask me if I’m a political writer, and I would say no, I’m not at all, but you cannot be not political when you write about China.” She also asserted, “It’s never my job to explain China.”

Whatever her intent, Yiyun Li captures the essence of solitude, building great moats of emptiness around her characters that no one, not even the reader, can breach.