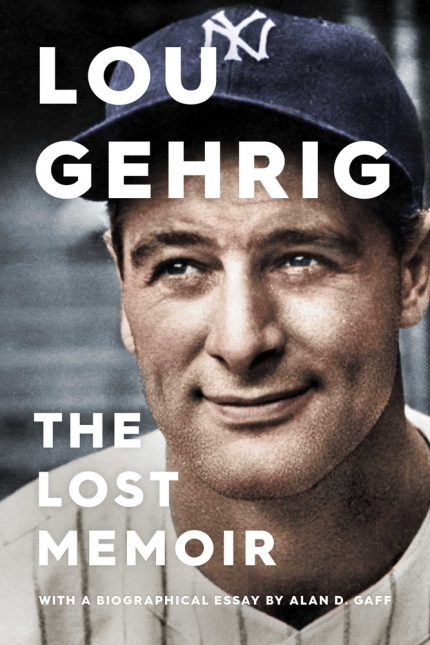 By a fortunate twist of fate, about two months before I took on the task of reviewing Lou Gehrig: The Lost Memoir by Alan D. Gaff, I read Jane Leavy’s The Big Fella: Babe Ruth and the World He Created. It felt natural to read these two books one after the other, since the men were successful teammates for 10 amazing years and three World Series titles.

But there’s more: Both were represented by the same agent, Christy Walsh, and it’s important to understand Walsh’s part in their careers. While Hollywood (where Walsh started as a reporter and cartoonist for the Los Angeles Herald) was the first to sell modern fame to Americans, Walsh saw that sports, with good-versus-evil and David-versus-Goliath storylines, were just as ripe for the promotion and marketing of individuals above and beyond the games they played.

Walsh ghost-wrote articles for pitcher Christy Mathewson, is probably the ghostwriter of the Babe Ruth articles linked further down, and, by 1921, had created a syndicate of writers to ensure that stories about — and ostensibly by — his clients were regularly broadcast throughout the country. No Walsh client was more a force of nature than George Herman Ruth, the Babe. Of those times, Leavy writes in her book:

“If the twenties roared, it was in large part because of new means of amplification: bylined sports columns, screaming tabloid headlines, and radio frequencies that broadcast with unforeseen clarity from sea to shining sea, and beyond. Fame got bigger, louder, more personal.”

Ruth was the ne plus ultra of “bigger, louder, more personal.” But he wasn’t a writer, and, what with baseball and his monumental carousing, he didn’t even have time to write if he’d wanted to. So Ruth and Walsh commissioned others to do this work; others who were 1) complicit in hiding certain truths about Ruth, 2) not always witness to the scenes they wrote about, and 3) not afraid to make things up when they needed copy to sell.

Which brings us to Lou Gehrig: The Lost Memoir. By 1927, after only two full major-league seasons, Gehrig was one of the top players in baseball, and still relatively young. Ruth took Gehrig under his boozy, cigar-reeking wing as a ball player; Walsh did the same as a potential money-maker.

To say Gehrig sought out fame would be false. But to say that others (from the Yankees’ front office to Walsh and the writers themselves) sought it out for him so that both he and they could capitalize on it? That would be true. And so, in 1927, Walsh signed Gehrig up to write a series of articles called “Following the Babe.” It’s these articles that serve as the ur-text of Gaff’s book.

Those who know the outlines of Gehrig’s life know that he was a mama’s boy, shy and self-effacing. He was not a writer. As Gaff explains in his introduction, “To meet his looming deadlines, Walsh arranged for sportswriter [and future MLB Commissioner] Ford Frick to assist Lou in writing his World Series columns.”

According to Leavy and the sportswriters she quotes (including Grantland Rice, Otto Floto, and Paul Gallico, the latter of whose 1941 biography of Gehrig was called Lou Gehrig: Pride of the Yankees): “They wrote from above, literally, filing dramatic set pieces from the remove of the press box without descending to the level of conversation or inquiry.” (Ever heard Gehrig’s iconic 1939 farewell speech? Here’s the full text.)

And now, 90-some years later, we have The Lost Memoir. Forgive, dear reader, my skepticism, but what is this book supposed to accomplish? Gaff follows “the lost memoir” with another 90 pages of biographical essay, which shows he is merely fulfilling Walsh’s dreams of telling mythological stories about people we want to be our heroes.

Has anybody dug up the Babe Ruth articles from those days and repackaged them as a “lost memoir” filled with the Babe’s deep reflections on a life of baseball wizardry, gargantuan consumption, and psychological brokenness? Are you looking here for authentic, deep reflections on the baseball life from Lou Gehrig himself? You’re not going to find them.

Although you will find a chapter on how Gehrig’s posthumous fame inspired American soldiers in World War II, you won’t find any mention of ghostwriting in Gaff’s book. And here are some choice words from Jane Leavy about Christy Walsh: “In his worldview, ghostwriting was a venerable, solemn, and honorable craft, no different than speechwriting for pols or the disciples — no one believed that Matthew wrote the Gospel of Matthew, did they?”

So take Lou Gehrig: The Lost Memoir with a grain of salt. Enjoy the stories and the history without believing all of it. Fame has always been a mirage, but making money? Well, that’s a different story…

Y.S. Fing is a composition lecturer at a local university and a literary gadfly in the DC area. For a few years now, he has been experimenting with short essay form in Fingism and Finglish.