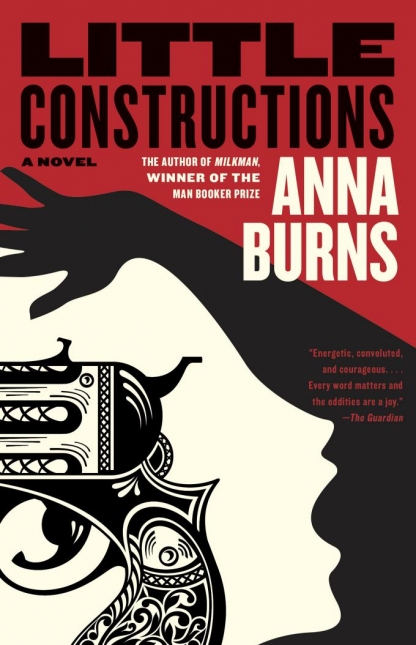 If Milkman — Anna Burns’ wondrous Man Booker winner — contained the proper name of not a single character, her latest release, Little Constructions (written years before Milkman, but only now published in the U.S.), overflows with them. There is Jetty Doe, Jennifer Doe, Janet, Julie, Jotty, and JanineJoshuatine Doe, plus two Toms. And that’s just in chapter one.

The problem soon becomes evident when it occurs to the reader that, though it’s funny and antic for a moment, Burns is actually expecting us to keep track of which character is which. And this is before we even get to John, JohnJoe, Judas, or JesseJudges.

Here’s the barest plot outline of this darkest of dark comedies: John Doe is the brutal and mentally unstable ruler of the tiny Irish town of Tiptoe Floorboard. His scorned mistress Jetty is coming after him and his wife, Janet (Jetty’s sister), though that’s hardly his biggest problem.

John is certain he’s being ratted out by someone in his posse, but he hasn’t been able to find out who it is, no matter how many of the gang he and the boys tie to the corner chair and torture to death.

Time and chronology are slippery concepts in Burns’ world, and there is rarely a direct through-line to be had in any part of the story. Any given sentence is primed to split open into cataracts of commentary, exposition, and backstory.

Our tour guide in and around the inhabitants and haunts of the town is a sprightly, first-person-omniscient narrator who slips in and out of the heads of characters and appears to be jacked up on caffeine and sugar, given the sheer volume of its discursive monologues.

Is it a spirit? The soul of one of Tiptoe’s dear dispatched? The escaped specter from the Ouija board the boys habitually consult? It remains unclear, but our guide offers dry philosophical and psychological commentary with nary a breath in between, and full entrée into all that’s hidden under the floorboards.

While Milkman was firmly set amidst the Troubles of 1970s Northern Ireland, this tale seethes with the dysfunction of insular communities that end up cannibalizing themselves. Everyone — truly everyone — in this story is traumatized to a lesser or greater degree through long-term abuse, sudden violence, the chronic threat of violence, or all three.

Burns employs her distinctive wit to make it somehow bearable, to make the reader go along for the ride and possibly laugh rather than shrink back, but it’s a tough go. The story is desperately in want of the humane voice that made Milkman such a delight.

The problem at its core is that the author gives readers no one to hold onto; there is almost nobody for us to know. Who is our protagonist? Where do our sympathies lie? Readers are held at arm’s length, left to wander in this den of dysfunction for the longest time with no clear place to hang our heart.

In the meantime, it’s hard to know what to do with, for example, the extended scene of young Johnny grabbing a woman from a bus stop — a woman only just learning to get back out into the world after a rape — and dragging her off to beat her nearly to death for the crime of not being friendly enough to him.

The little old ladies who witness the violence talk loudly among themselves so that they don’t have to listen to her screams, “because in Tiptoe Floorboard the belief ‘If it’s happening to you then, thank God, it’s not happening to me’ is prevalent in its existence.”

Burns paints a bleakly comic picture of a town full of people trained to ignore the events taking place directly in front of them, of blanking out brutalities even as they unfold.

When it comes to the horror of incest, the townspeople are fully incapable of acknowledging its existence, meaning victims like Julie and Jotty have zero recourse beyond what they may be able to devise themselves.

Eventually, a story reveals itself of two people clawing their way toward something like normalcy, and eventually toward each other — a tall order for folks who’ve never witnessed a stable human relationship anywhere around them.

Perhaps chalk this up as the most oblique love story ever, one that takes a pointedly brighter turn in the closing pages. Yet I can’t help but feel the journey would have been more successful, and certainly more satisfying, if Burns had invited us in, drawn us closer, and shown us a little more heart.