A complex portrait of what it means to get close. 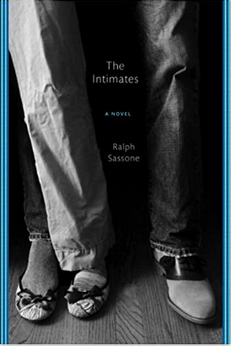 Ralph Sassone’s first novel paints a complicated portrait of intimacy.  After a brief physical attraction during high school, Maize, a heterosexual young woman, and Robbie, a bisexual young man, become close friends.  They establish a comfortable domesticity in their college dorm and, later, in their Manhattan apartment.  Each takes shaky, touching steps toward sexual intimacy with others, but neither achieves satisfying love.  Both have difficult relationships with their divorced parents, adults who have been unable to sustain their own intimacy.

The novel is divided into three parts.  The first and shortest focuses on Maize at seventeen, and features a mutual attraction between her and her guidance counselor, and her seduction by a college interviewer.  In the second part, set during their  college years, Robbie visits his estranged father in Rome; Maize is present via text messages and phone calls.  A series of flashbacks recount Robbie’s affair with J., a male professor.  Part three of the novel alternates between Maize and Robbie’s points of view.  Both characters, along with Robbie’s lover, Daniel, return to the wealthy Connecticut suburb where Maize and Robbie grew up in order to help Robbie’s mother clear out her house.  Flashbacks depict Maize’s struggle to assert herself with a domineering boss.

Robbie and Maize are so close, Sassone says early on, that they are “like each other’s human diaries.”  This should be taken as a warning that the book will focus on inner musings – not uninteresting, and often funny, but sometimes too familiar and confining.  Both characters are seeking mature love relationships, although at first it seems that sex is their only avenue.  Sassone excels at evoking their feelings of being half-present at their sexual initiations, both alienated and curious.  But there is too much commonplace physical detail in Maize’s first sex and in J.’s five-page (!) seduction of Robbie.  Sassone’s feints at humor and the hilarious final note do not rescue the latter scene from tedium.

Robbie seems to have less insight about his own struggles than Maize does about both hers and his, but in Rome, Robbie recognizes that Clarissa, his father’s mistress, has a talent for intimacy that he envies.  He moves from J. to Daniel, someone his own age, but is unable to infuse that relationship with the kind of intimacy that inspired him in Rome.  Sassone mercifully skips over recounting Maize’s promiscuous sexual encounters in college.  Maize is attracted to Eli, an employee in the upscale New York realty office where they both work.  Her one date with Eli, told in flashback in part three, points toward the possibility of a mature love.

The intimacy between Maize and Robbie does not extend to all things.  Robbie hides from Maize his months-long affair with J., and in its aftermath, J.’s continued pursuit of him.  Similarly, Maize does not confide her infatuation with Eli to Robbie or tell him about their date.  Yet these are major romantic events for them. Keeping secrets is not compatible with being a human diary.  Perhaps our main characters are not quite as close as it appears, or there is a deeper intimacy they have yet to discover.

Maize and Robbie both have absent fathers and less than healthy relationships with their mothers.  Maize’s and Robbie’s mothers become friends, however, and one quiet scene between the two women is the most moving in the novel.  Robbie is still mired in his childhood ambivalence toward his mother, although there are other mother figures who represent the possibility of a healthier relationship.  By the end the reader can see that Maize has grown up and Robbie will likely achieve psychological maturity.  The problem is, especially with Robbie, that the story is stuck for too long in post-adolescent angst.  There are hints that Robbie and Maize might revive the sexual attraction they felt in high school.  But signs are equally strong that Maize and Eli may get together.  And there is Daniel’s parting remark, which intrigues Robbie but is not developed, that Robbie is holding Maize back.

The novel does not have enough forward motion, and the main reason is that each of its three parts reads like a stand-alone story.  It is difficult to feel a trajectory for the book – a sense of events unfolding toward something.  The endings of the first two parts are skillfully rendered, but each signals a full stop.  They do not create suspense or point to further events.  Also, Sassone does not withhold information in a way needed to shape suspense; rather, each part contains enough background to let it stand alone.  Even in part three, he is still providing introductory facts.  For example, Maize goes into Robbie’s room in his mother’s house, and the reader is treated to a riff on how bookish Robbie has always been, as if this is new information.

Sassone has a larger problem with riffs – he can’t seem to resist them.  The novel is cluttered with metaphors that drag in too much from outside the scene.  His “like’s” and “as if’s” are not single-word comparisons but long phrases that, while playful and often amusing, take the reader away from the moment and dilute its emotional impact.

Sassone does not need clever metaphors to jazz up the story.  In sharp and witty language he creates two smart, sympathetic characters, each of whom is groping toward maturity.  In the last scene, Maize and Robbie ride the train back to New York, their legs touching.  Sassone leaves it to the reader to decide whether they will find what they are looking for.

Alice V. Leaderman writes fiction, hikes, skis, gardens, and volunteers with a group that promotes the use of native plants.  She lives in Maryland with her husband.

BUY THE BOOK from Politics & Prose

BUY THE BOOK from Amazon.com

A Permanent Member Of The Family

Glimpses of familiar themes are caught, but the author's latest short-story collection lacks the power of his fearless and well-crafted novels.