Letter to a Future Lover: Marginalia, Errata, Secrets, Inscriptions, and Other Ephemera Found in Libraries 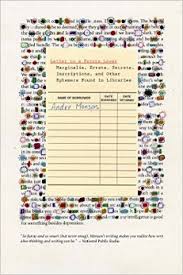 Ander Monson’s Letter to a Future Lover: Marginalia, Errata, Secrets, Inscriptions, and Other Ephemera Found in Libraries is a collection of essays that eschews easy categorization. “Nonfiction” hits close to the mark, but “essays” belies the content and force of this work, which recalls Walter Benjamin’s The Arcades Project, yet isn’t exactly that, either. In an effort, then, to uncover Monson’s achievement, let’s begin with a description of the work itself.

Letter to a Future Lover is an assemblage of brief vignettes. These alphabetically arranged pieces are random topics based on the author’s encounters with miscellaneous matter found in shelved library book. Thus, we have entries on “Country Music Death Notices, 1979-1980”; “How to Read a Book”; “Know Your Lake Effect”; and a series of “Dear…” and “Letter to…” (e.g., “Dear Defacer,” “Dear Monument,” etc.) writings, which emphasize the title’s prescription.

Each essay is a discursive (and often digressive) stream-of-consciousness response to the author’s uncovered note, scribble, quote, or object. Thus, in an entry for “Two Afterlives,” a quote from Donald Antrim’s The Afterlife sets the following in motion: Monson’s philosophy of two afterlives, the author’s recollection of his father’s books and the notes made within them, Monson’s own attempts to replicate Edgar Allan Poe’s “hypnogogic state” between sleep and dream, and a final coda on what will be discovered a generation later by his own children when the cycle repeats.

Monson takes a fresh spin on approaching a book about books. In his ode, he de-emphasizes a tome’s content — the history it may elucidate, the story it might weave, the pleasure of discovery it may provide — and instead champions its ephemeral attributes: the pen that scribbled in the margin, the mind that absorbed the work, the hand that once caressed its spine.

In fact, Monson pokes at this theme. “In the age of disassociation and fragmentation, history-free ebooks torrented on the Internet, burger meat from random cows gathered up in drive-thru fast-food burger patties to be liked, live-tweeted as we eat, there’s also this: a thing, an artifact, complete with Hancock and finger trace, which makes it more than other books, we’re meant to know.”

He conceives of the digital book as analogous to the fast-food hamburger — without history, without individuality — and its banal consumption, made even more banal in its re-digestion via social media. In contrast, the book accumulates associations and assumes a deeper existence in the interstices of its reality: “Your hands were on this edition, in a room somewhere.”

Space is a controlling motif throughout Letter to a Future Lover. Foremost, there is the space where books live: libraries. Monson also considers the physical and figurative space between shelved books: “the space between [Eli] Siegel’s breathless iterating lines and [William Vincent] Sieller’s sonnetteering is a world.” In another passage, he remarks, “The space between biology and biography is vast.”

Then there is the space or absence engendered by unreturned library books: “Found: this book, or its record, since the book was lost into the space between IN LIBRARY and DUE 03-10-13.” For Monson, an abandoned library “no longer houses books,” but instead “houses light or the memory of books. Shelves of emptiness. The thought of work.” As an extension of this, the margins assume their own “space” where thought mingles with the white of the page.

But what, with these philosophic amblings, does Letter to a Future Lover hope to achieve? Indeed, in reading Monson’s book, I pondered this often. And as I did so, I found myself interacting with the work. I underlined poignant phrases; I scribbled asides when a thought by Monson spawned one of my own; and I scrawled my disdain when I felt Monson had gone too far in his philosophy-making. Thus, fresh marginalia and ephemera — which only a “real” book can generate — was born.

Ironically, then, I must ask: What will be the impact of Monson’s collection for those who read only on their Kindle or Nook? What will be absent from that digital reading that exists in the paper-bound work? Perhaps Monson’s postmodern contemplations will next consider the gaps, the errata, and the space between the digital and print world created by his own publication.

Shelby Smoak is a writer living in Northern Virginia. His memoir, Bleeder, won an IPPY Gold Medal, a book-of-the-year award from Foreword Reviews, and was nominated for book of the year by the American Library Association.