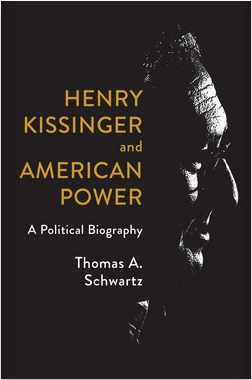 As nationwide protests broke out over the murder of George Floyd in late May, I inadvertently found myself reading biographies of figures from two aspects of the United States seemingly at war with each other: government and culture.

The lives of Henry Kissinger, one of the most prominent exponents of the Cold War in America, and Alain Locke, the man who provided the intellectual foundations for the Harlem Renaissance, are both fascinating in their own right. But reading their biographies together brought their distinct lives into the intersection of teargas and broken promises.

Kissinger has become the most famous political realist of the second half of the 20th century. He recognized power where it existed, manipulated it where he could, accommodated it where necessary, and used it in ways that earned him the charge of war criminal.

In particular, the decision in 1969-1970 to expand the Vietnam War into neighboring Cambodia and Laos led to the deaths of tens of thousands of civilians. He then turned a blind eye, one of several, as a military regime in Pakistan slaughtered hundreds of thousands of Bengalis in 1970-71, allowing a genocide because he was using Pakistan as a go-between to make overtures to communist China.

But all this is known. Christopher Hitchens did a remarkable job of prosecuting the case against Kissinger in The Trial of Henry Kissinger. Kissinger has enjoyed more favorable and personal biographies recently, including from historian Niall Ferguson and previously from journalist Walter Isaacson. In April 2020, another one, by Barry Gewen, came out, celebrating Kissinger’s politics of realism as the answer to a troubled world (listen to the Independent’s interview with Gewen here.)

So, what is Thomas A. Schwartz’s 2020 iteration doing? As national security advisor and later secretary of state, Schwartz writes in Henry Kissinger and American Power, Kissinger brought coherence and strategic purpose to American foreign policy. He was awarded the Nobel Peace Prize for the Paris Treaty, which brought the Vietnam War to an end, a goal he reached by extending the U.S. bombing campaign into Cambodia.

His reopening of China is a strong contender for the top diplomatic coup of the 20th century. Yet the cost of his silence on the Bengali genocide makes his being awarded the Nobel all the more incredible. If coherence and strategic purpose imply subsuming means for ends, it was certainly Kissinger’s oeuvre.

But what means, what ends, and what coherence? Kissinger’s contribution to the making of American power in the face of severe challenges from the Vietnam War to the oil crisis constitute the large work of diplomacy, statecraft, and national interest, but Schwartz places Kissinger in the middle of the petty realism of domestic and bureaucratic politics.

There is, of course, an entire school of scholarship that posits the importance of domestic politics in the making of American foreign policy against the more effervescent narrative of how politics ends at the water’s edge. Kissinger — as do other leaders — likes to claim his decisions serve national interests first, but it’s worth examining that premise, and Schwartz helps by writing at length about Kissinger’s efforts to preserve his relationship with his boss, Richard Nixon.

Nixon appointed Kissinger as his national security advisor and publicly lionized him to the point where Kissinger came to be seen as a parallel secretary of state. Eventually, Nixon gave him that title, as well. Their private relationship, however, was more fraught. Nixon could be caustic and jealous of Kissinger’s successes with the media, and Kissinger resorted to sycophantic praise of his boss to secure his own position.

As a German-born Jewish refugee who has kept his thick accent to this day, Kissinger was never himself a contender for the top post of president, and it is here, in his service to another man who would be commander-in-chief, that the crux of Schwartz’s political biography lies.

After Nixon resigned in the wake of the Watergate scandal, Kissinger continued as secretary of state under Gerald Ford. The Ford-Kissinger relationship was not as close as the Nixon-Kissinger one. As part of the Ford administration, Kissinger felt his intellectual and political sides become conflicted. On one hand, he saw American power in decline and the necessity for U.S. foreign policy to accept its new limitations. On the other, he sought to impose American power with forceful interventions from Angola to Chile and elsewhere.

Following Ford’s defeat by Democrat Jimmy Carter, Kissinger left office with the expectation that he would come back in the next Republican administration. Instead, Ronald Reagan bypassed Kissinger in favor of Kissinger’s old deputy, Alexander Haig. Incredibly, the man who personified American diplomacy for a decade never returned to government service.

Schwartz brings up this anomaly but does not address it adequately. It is possible that subsequent Republican presidents didn’t want to employ a cabinet member with a higher foreign-policy profile than their own. It’s also possible that Nixon’s choice of Kissinger in the first place was unique — two insecure men coming together in the political cauldron of the 1968 elections.

Today, Kissinger is a private citizen, having built a prominent international-consulting business. Still, he has steadfastly lobbied for improved U.S.-China ties, including helping smooth the ruffled relationship after the Chinese government’s Tiananmen Square crackdown on protestors in 1989, and his is a strong voice on engaging China to this day. The Kissinger legacy remains.

Unwittingly placing Kissinger’s biography alongside Alain Locke’s during the Black Lives Matter protests pointed me to a different legacy, as well. Locke and Kissinger had similar marginal roots in American society and similar insecurities about their place in it.

Locke was gay, Black, and slight of physical stature, and navigated the height of Jim Crow to offer a revolutionary vision of American art. He contributed to the rise of jazz as a national art form and to the prominence of writers like Langston Hughes and James Baldwin. Decades later, Henry Kissinger, a German-Jewish immigrant with an immutable accent, became the personification of American political power.

Both were also Harvard men, albeit separated by 40 years. Locke and Kissinger came to embody, respectively, American culture and the American state, the clashes between the two entities having long ago — as now — shaped and reshaped American politics.