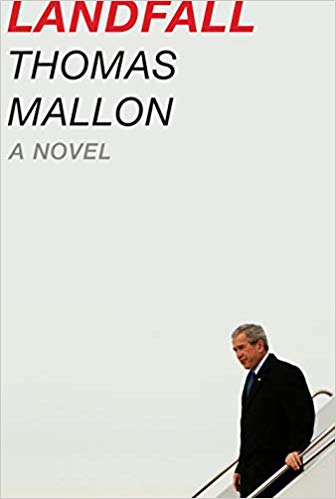 Been longing for a fictionalized journey through the misty days of George W. Bush’s second term? Then, boy howdy, are you ever in luck. It’s all here in Landfall: Iraq and Katrina, Dick and Don, Condi and W., plus a whole host of other secondary and tertiary events and figures that will make you say, “Oh, that’s right; I forgot about that!”

Yes, it’s all here, yet a reader might be forgiven for wondering, “To what point?”

It is hard to know what story author Thomas Mallon is telling in this last of three presidential re-imaginings, which are being described as a loose trilogy. (The other two are Watergate, about Nixon’s presidency, of course, and Finale, about Reagan’s.)

He’s not writing political satire, which is good, since the current administration has fully ruined that genre for several generations to come. Nor is this any sort of alternate history treatment in which 1,800 people miraculously didn’t die in and around New Orleans in 2005.

It certainly is a Who’s Who of mid-2000s politico-celebrity Americana, as evidenced by the five-page list of “characters” in the front of the book, only a small percentage of whom are entirely fictional.

Of those, the two primary ones are Allie O’Connor and Ross Weatherall, who meet in 1978 as high schoolers in Lubbock, Texas, at a tiny campaign rally for George W. Bush in his failed bid for a congressional House seat. Ross is smitten with both Allie and W., but Allie’s family moves away shortly thereafter.

Fast-forward to early 2005, when Ross is a mid-level guy at the National Endowment for the Arts and Humanities with a failing marriage, and Allie is an unmarried civilian lawyer with the Army, helping to oversee the first post-Hussein elections. Ross remains a Bush supporter as he works on an NEAH project in New Orleans, while Allie is an outspoken proponent of getting the troop numbers in Iraq to zero.

Donald Rumsfeld, deciding it’s time to get out of Iraq, and knowing how W. listens to the women in his life, positions Allie so that she can offer Bush the same unvarnished assessments she’s given him. In the meantime, Allie and Ross reunite, which seems like a dream come true to Ross, until he realizes that Allie isn’t one to stick around for long.

Don’t be fooled into thinking this is Allie and Ross’ story, though; we spend practically as much time with former Texas governor Ann Richards and talk-show host Larry King as we do with the supposed protagonists. We don’t really get to know or understand them, so it’s hard to be invested, and they end up underdeveloped and fuzzy.

The same can’t be said for the nonfictional part of the cast. It takes a certain presumption, if not chutzpah, to use living public figures as characters in a novel, putting words in their mouths and thoughts in their heads — insecurities, grievances, petty vindictiveness. Especially when it comes to the real-life women in this novel, the characterizations read like a catty, behind-the-scenes exposé from a disaffected White House body man, as told to People magazine.

Perhaps surprisingly, Mallon treats George W. Bush largely with respect here, painting him with a level of depth and insight that eluded his popular image. But, true or not, there is a serious ick factor in putting Condi Rice in bed with Canadian foreign minister Peter MacKay, and it’s actually painful to read passages like this one:

“Bush again looked toward Condi, sensing how everywhere and nowhere she was these days…she still wanted to know what he thought before she’d think for herself. More and more she struck him as an isolated, artificial figure, with no place to go and nothing to contribute.”

There isn’t enough temporal distance between then and now to pull this off effectively, at least not in fiction.

It’s obvious that Mallon put in significant time in newspaper morgues and other archives, and one can imagine the day-by-day timeline that probably papered the walls of his writing space. But it gets old, the constant nudge-in-the-ribcage “remember this?” quality of trotting out the likes of Terri Schiavo, Rielle Hunter, Harriet Miers, and — oh, the prescience — “Brett Kavanaugh, the staff secretary” bringing news of Sandra Day O’Connor’s resignation from the Supreme Court.

In the fictional elements of Landfall, George W. Bush ends up being something of a yenta to Ross and Allie, maneuvering to help make sure they’re together for good. In case we miss the point, the author graciously spells it out for us:

“If he could help to solve their problems, writ small in the ink of a double catastrophe, maybe that could lead him toward a solution for the catastrophes themselves. Ridiculous, yes. But even so.”

By Matt Taibbi and “Anonymous”