A Cambridge-trained philosopher ponders the imponderables of athletics. 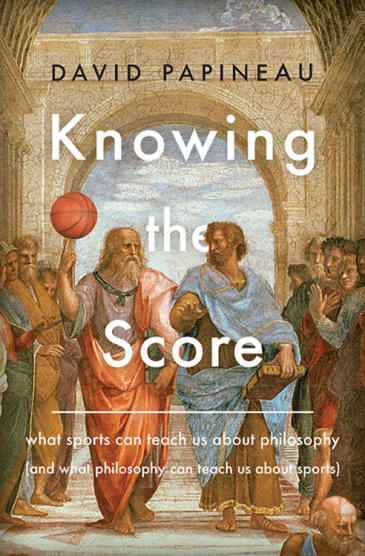 Where was David Papineau when we needed him?

By “we,” of course, I mean anybody who cares about the sport we Americans call football — in particular, Roger Goodell, the National Football League commissioner who seems preternaturally skilled at making his employers even richer than they already were, but is easily flummoxed when confronting questions of right, wrong, and the vast grey area in between.

And by “when,” I mean the long national nightmare known as “Deflategate,” when commissioner Goodell suspended the NFL’s best player, New England Patriots quarterback Tom Brady, for four games at the start of the 2016 season, on the suspicion that Brady may or may not have known something about a half-dozen footballs that may or may not have been surreptitiously deflated to suit the quarterback’s preference.

Surely, you think after reading Knowing the Score, Goodell could’ve used the counsel of a Cambridge-trained professor of philosophy and former president of the Aristotelian Society. Especially one like Papineau, who comes to every sporting argument, large or small, armed with a background as a onetime competitor at tennis, soccer, golf, cricket, rugby, squash, field hockey, and sailing; a recreational body-surfer, sailboarder, and fisherman; and a late-to-the-dance New York Mets fan.

Like any middle-aged relief pitcher — or in his case, cricket bowler — Papineau spends some time nibbling at the corners of the plate. The early chapters of Knowing the Score veer toward the natural sciences (how is a major-league hitter able to react to a 100-mph fastball in the blink of an eye?) and psychology (what causes an aging golfer or over-thinking second basemen to choke, or develop a paralyzing case of the yips?).

Happily, Papineau moves on to ever-richer ground, from which forms of gamesmanship are tolerable in a civil society, to the shades of difference between bending the rules and immoral behavior; and on to the thespians masquerading as soccer players, who act out near-death experiences for the benefit of gullible referees.

One by one, he takes on the really big questions: Nature or nurture? Cricket or baseball? The baked-in regional loyalty to homegrown sports. Which, of course, brings Papineau and his audience back to “football,” a word that means one thing here in the States, and something else (what we call soccer) in most of the rest of the world. Except, of course, in Australia, where it might mean Australian Rules “footy” in the capital city of Melbourne…or Rugby League football just down the road in Sydney or Brisbane.

Then there’s the granddaddy of them all: What constitutes a sport? Hint: Papineau disagrees strenuously with Ernest Hemingway, who, in his straight-to-the-point style, opined that “Auto racing, bullfighting and mountain climbing are the only real sports…all the others are games.” The author is liberal enough to make room for videogames — and, yes, Nathan’s Coney Island Hot Dog Eating Contest, held every Fourth of July — under his sporting tent, but not bridge or chess.

In more than a few cases, sport serves merely as an avenue to heady discussions on race, ethics, or spacetime worms. (No, we’re not talking about an alien invasion.) But in the hands of a logician like Papineau, it’s all part of the (mostly) high-minded fun.

There’s something here for anyone who’s ever stared down a six-foot putt to win a two-dollar Nassau, or wondered about the men who do it every Sunday on the pro tour, with millions riding on every stroke.

If some of it sounds a lot like an argument you might’ve had around the office water cooler, or after a few beers at the neighborhood pub, that’s not necessarily a bad thing. What else is philosophy, after all, but a bunch of smart guys debating the weighty questions of the day?

And given the current political climate, Roger Goodell isn’t the only one who might benefit from an examination of what compels world-class athletes to do what’s best for the team instead of pursuing what would appear to be their own self-interest.

Sadly, Papineau never gets around to directly tackling the multifaceted drama of Deflategate. And the manuscript for Knowing the Score was complete before Brady and the Patriots got their revenge by staging an historic comeback in Super Bowl LI, then genially stiffing commissioner Goodell at the post-game festivities.

Still, it’s fun to think an old tennis player like Papineau, who learned early on the many subtle ways to get into an opponent’s head, might’ve been sympathetic to the Patriots’ zeal in pursuing every competitive advantage. Had he spent enough time in the American South, Papineau might even subscribe to the ethos of stock-car racing, where rubbin’ is racin’ and the prevailing philosophy on pit row has always been, “If you ain’t cheatin’, you ain’t tryin’.”

Jay Price, a longtime sports columnist at the Staten Island Advance, is author of Thanksgiving 1959, about a time when one corner of New York City was still part of small-town America, and high school football was the last thing guys did for love. He coaches high school football in Manasquan, NJ.