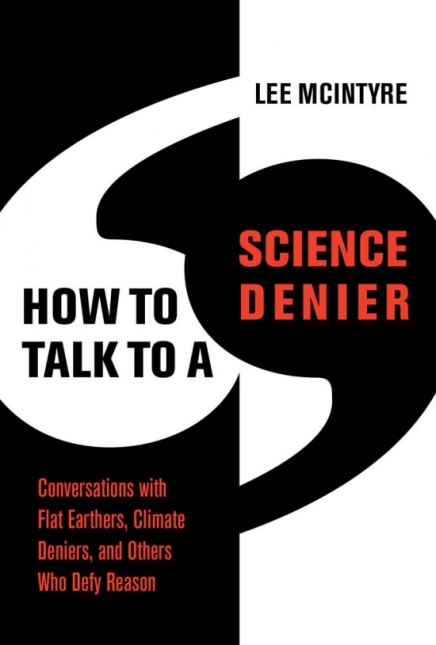 In 2018, Lee McIntyre took on a fun assignment as a philosopher of science when he attended the Flat Earth International Conference in an attempt to ascertain firsthand how a community of people could enthusiastically dismiss the most basic proposition that our planet is a pockmarked and imperfect sphere floating in space.

Though the guerrilla scholarship had a lighthearted tone to it, McIntyre took his mission seriously, hoping his lessons with the Flat Earthers would help the scientific community debate more serious matters, like the efficacy of vaccines and the reality of manmade climate change.

McIntyre learned many lessons from the Flat Earthers and his subsequent review of the literature around science denial. Chiefly, he concluded that what we choose to believe is often a pure and powerful expression of who we are, who we want to be, and what communities we want to be part of.

Changing your mind about the Earth’s flatness might mean finding a new group of friends after all. It means missing next year’s conference. It means no more late-night, online discussions about how NASA hoaxed the planet with phony space images. Though McIntyre doesn’t press this point, it seems a lot like asking an alcoholic to stop drinking when their dearest friends gather daily at the bar.

As his How to Talk to a Science Denier debuts, the United States and the world face a compounding feedback loop between science denial and extremist politics. A national poll released in June from Monmouth University found that one in three Americans believes Joe Biden only won the U.S. presidential election because of voter fraud. This was months after an historic riot at the U.S. Capitol.

Concurrently, American conservatives took up resistance to mask-wearing and then to receiving covid-19 vaccines. Meanwhile, climate change remains a worldwide political and scientific issue that is not addressed by Biden bringing the U.S. back into the Paris Agreement.

Lee takes an empathetic approach to his science-denying subjects, even when he vehemently disagrees with their conclusions. He traces the roots of science denialism back to the public-relations campaign waged by tobacco companies against health research in the mid-20th century. Their strategy, McIntyre says, was to “manufacture doubt.” This two-word maxim also describes the tactics used by fossil-fuel companies to spread skepticism about climate science.

Science denialism, says McIntyre, spreads through five techniques. First, deniers cherry-pick data to make their point, like saying delta-variant covid-19 infections prove vaccines don’t work. Second, they engage in conspiracy theories, like claiming that vaccines are just a profit-grab by pharmaceutical companies. Third, they rely on fake experts, perhaps drawing on the credentials of a cardiologist to comment on epidemiology. Fourth, they make illogical claims, like when Donald Trump declared the pandemic would go away on its own, “like a miracle.”

Finally, they demand scientists always be perfect in their pronouncements and assert that changing scientific consensus indicates disagreement, and that unexplained events make the truth about something like covid’s deadliness impossible to determine.

With major issues of public health, environmental sustainability, and American democracy at stake, it’s natural for these debates to grow angry, especially as basically agreed-upon facts are denied. But McIntyre simply sees these deniers as people who’ve wedded their identities to ideas marketed to them via proven techniques devised to exploit weaknesses in the human psyche.

But, he says, such people can be persuaded. McIntyre’s enterprise is hopeful, and his book is littered with productive conversations he’s had with Flat Earthers, coal miners (who have more diverse views about environmental regulations than the media portrays), and friends who’ve foresworn genetically modified foods.

His advice: Have compassion. He stresses the importance of personal relationships; it’s tempting to shun science deniers, but that only pushes them further away. Flat Earth believers have been fired from their jobs. When so exiled, they turn to the Flat Earth community for support.

He also preaches engagement through charts, graphs, and friendly conversations about basic facts. Most people are unaware, for example, that few climate scientists object to the consensus around the Paris Agreement. Yet when the news and social media amplify outlier voices, the casually interested person is led to believe there’s more disagreement than there is.

McIntyre is also aware that the most recent debates have tended to place science in opposition to right-wing politics. So he explores science denialism on the left, too, including opposition to GMO foods, believers in the vaccine/autism connection, and doubts about the safety of nuclear power. But none of this latter cohort rises to the level of danger presented by climate-change deniers, mask refusers, and election-conspiracy adherents.

McIntyre hopes, but cannot prove, that countering science deniers will drain some passion from our political divisions. Of course, our political and cultural divisions won’t be entirely ameliorated by the acceptance of science. But people who at least rely on the same set of facts may find that their disagreements won’t be dominated by hyperbole.