Eye on the Struggle: Ethel Payne, the First Lady of the Black Press

A well-researched, detailed look at the life of a pioneering journalist. 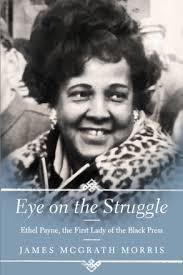 Despite the importance of African-American women in the Civil Rights Movement, their stories have often been neglected. In this expansive new biography, author James McGrath Morris seeks to help remedy that oversight by chronicling the life of Ethel Lois Payne, a trailblazer who paved the way for other African-American women journalists, such as Charlayne Hunter-Gault, Gwen Ifill, and Isabel Wilkerson.

Eye on the Struggle has a brief prologue and three main sections. Part one focuses on Payne’s family and her upbringing in Chicago. Payne was born in 1911. Her mother, Bessie Austin, moved from Indiana to Chicago, where she met Payne’s father, William A. Payne, who had left Tennessee as part of the Great Migration to northern cities. He was a cooper who later became one of the celebrated Pullman porters.

The family experienced racial discrimination and lived through the Red Summer of 1919, but unlike many other African-American Chicagoans, they lived outside the heavily segregated South Side. Thus, explains Morris, Payne attended schools and had access to resources typically reserved for whites only. She began writing through the influence of a high school English teacher who had also taught Ernest Hemingway. Following high school, Payne worked as a librarian and at a variety of other positions while taking classes and writing on the side.

A member of Chicago’s NAACP, she served as chairwoman of the planning committee for A. Philip Randolph’s 1942 rally at the Chicago Coliseum in support of the March on Washington movement. She continued her organizing and activism work but, in 1948, moved to Japan to serve as an assistant service-club director for the U.S. Army.

Payne was intrepid in exploring Japan, and she wrote privately about her experiences and those of African-American troops in the segregated U.S. Army. She eventually shared her notes with two visiting African-American reporters. When her reflections were quoted in a Chicago Defender exposé about the relationships between African-American soldiers and Japanese women, Payne was removed from her Army post. Yet that dismissal launched her journalism career when she landed a position at the Defender, then one of the most influential African-American newspapers.

Part two of Eye on the Struggle details Payne’s rise as a journalist. Initially based in Chicago, she was later posted to Washington, DC, as a national correspondent. She was only the third African-American journalist to secure White House press credentials.

Payne was a witness to many of the events in the Civil Rights Movement. In 1955 alone, she covered the Bandung Conference, the murder of Emmett Till, and the Montgomery Bus Boycott. In 1958, the Defender reassigned Payne to Chicago; when she refused to go, she was fired. Remaining in D.C., Payne went to work for the AFL-CIO and for the Democratic National Committee.

Part three of the book explores Payne’s international travels and the latter stages of her career. She returned to work for the Defender for a time and was the first African-American reporter in Vietnam. As a CBS News commentator, she was also one of the few African-Americans on television. She traveled extensively throughout Africa and Asia and remained active as a writer, editor, teacher, and activist until her death in 1991.

This well-researched volume helps the reader understand the necessity of the “black press,” as these newspapers and magazines covered issues that were not given mainstream attention. The reader also gains an appreciation for Payne’s contributions to journalism and for her approach to her work not as an objective reporter, but as an advocate whose job was to raise issues important to African-Americans.

Eye on the Struggle is at its best in placing Payne within the context of U.S. and international history. It provides helpful discussions of the events surrounding her life and work. For example, in addressing her organizing activities with civil rights leaders such as Bayard Rustin, Morris highlights the fact that Martin Luther King Jr. — often mistakenly regarded as the founder of the Civil Rights Movement — was then still in high school.

The attention to historical context, however, is also one of this biography’s weaknesses. The amount of detail feels tedious in places as the author seems determined to wring the life out of every scrap of research. We also do not learn much about Payne’s private life in this meticulous work, but we do gain an appreciation for her public work and significance as a journalist.

Nyasha Junior teaches Biblical studies at the Howard University School of Divinity in Washington, DC. Follow her on Twitter at @NyashaJunior.