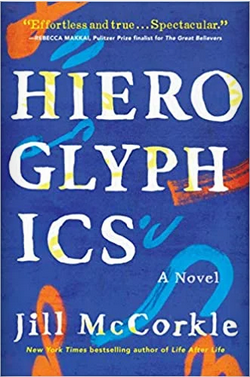 Life consists of a series of accidents, happy and unhappy, that gives shape to our memories. We look back and consider those occasions and try to understand their meaning, turning over words and images, perhaps re-reading journals or letters, holding tokens and talismans in our hands. Remembering where we were before and after those moments that changed everything. Deciphering the clues of what happened, never fully certain as to what it’s all about.

In her new novel, Hieroglyphics, Jill McCorkle traces the lives of four characters whose lives are shaped by horrific losses. Lil and Frank, a married couple in their 80s, are each marked in childhood by the sudden death of a parent by violent accident.

Lured by the presence of their own daughter to North Carolina, they return to live near the site where Frank’s father was killed in a terrible train wreck. Both homesick and timesick, they wander restlessly through an old life and landscape.

Lil, who teaches dance — as her mother had done long ago — sifts through her stacks of disorganized notes and diaries to reconstruct a narrative of her life, weaving in intimate buried feelings and painful betrayals. Frank, who spent his life as an archaeologist, is drawn back to his boyhood home, wondering what memories can be pieced together by the broken tokens he left behind.

Refusing them entry to that home is its current tenant, Shelley, the third tortured soul, a single mother who is raising Harvey, her strange 6-year-old son, who has fears and regrets all his own. Barely keeping herself together, Shelley is another student of hieroglyphs, working as a court stenographer at the trial of a cold and brutal murderer.

Each of the characters is fully rounded and, at turns, funny and warm, forgetful and deeply wounded. The frenetic chaos of the single mother and problem child are counterpointed with the elegiac tone of the couple in old age.

The quartet circles round each other and the roads that lead them to a small and rundown house with an old root cellar in the yard. I could not stop thinking of Robert Frost’s poem “Directive,” with its imagery of the past found by following “The road there, if you’ll let a guide direct you/Who only has at heart your getting lost…”

McCorkle is that guide through Hieroglyphics. She lets the story unspool slowly and in great accreting detail. We see the pink scarf and black suede wedges with ankle straps that Lil’s mother wore the last time she left her. We feel Frank’s boyhood eagerness for a Captain Midnight’s Secret Squadron decoder ring; Shelley’s daydreams and revenge fantasies in the courtroom; and Harvey’s fake mustaches to keep others from looking too closely.

This trope of hidden identities and family secrets gives the story its bumps and jolts. For all its easygoing pace, the plot has moments as brutal as the accidents that take the parents’ lives and as touching as the scene, late in the novel, when the truth spills out unexpectedly for everyone, including this reader.

The real joy of Hieroglyphics is its intricacy, the pieces of four stories assembled into a mosaic of love and pain and redemption. Whether in Lil’s first-person epistolary account or the others’ accounts in third person, the plain and elegant style pulls the reader through its shifts and counterpoints. You emerge bedazzled, blinking in the bright sunlight of now and carrying the shards of their experiences in your heart.

Five of McCorkle’s previous novels have been New York Times Notable Books, and Life After Life was a New York Times bestseller. No surprise there. McCorkle is a gracious stylist who hides a whip-smart gift behind her Southern charm. She knows how to tell a good story.

Keith Donohue is the author of five novels, most recently The Motion of Puppets.