The Education of Dixie Dupree

A harrowing story of domestic trauma with Southern Gothic flair. 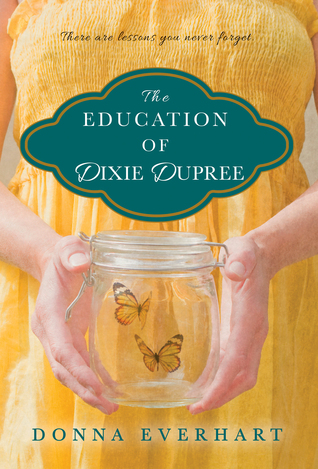 In this intense narrative, set in a small Alabama town in 1969, 11-year-old Dixie is having what is no doubt the most difficult time of her childhood. Her coping mechanism has been her diary, given to her as a birthday present three years earlier by her mother. Among the many things recorded in the diary is material to be used in the New Hampshire trial of her Uncle Ray. With this information laid out, author Donna Everhart baits the hook and starts reeling her readers in.

The Dupree family is ready to explode. The tension between Dixie’s mother and father is unbearable. Dixie and her older brother, AJ, are caught in the emotional maelstrom that surrounds their mother, Evie’s, wish to return to New Hampshire. Never being able to make a socially comfortable life for herself in the South, she talks endlessly about her idyllic upbringing in Concord — though she is silent about her brother, Ray.

Evie’s misery has made her husband miserable, too. It has torn them apart and sent him to drown his feelings in alcohol. Evie is often unstable, and Dixie never knows how “Mama” is going to react. She is often impatient, cruel, and physically abusive. Then Evie is apologetic, but soon doubly cruel. More and more out of control, Evie blames her husband for her unfortunate situation as an outcast in Alabama.

Dixie can be hotheaded, too. She feels the need to strike back. She fights any feelings of being intimidated. She is also a chronic liar whose lies serve many purposes beyond protecting herself. However, it is Evie who has the deeper secrets, secrets that drive the characters’ destinies long before those destinies are fully revealed.

Dixie is also our narrator. Her voice is clear and strong, though perhaps author Everhart has made her too articulate for a person so young. Dixie processes what is going on around her with a high degree of sophistication. Moreover, she is an unrepentant questioner. Often, her troubles with Evie stem from asking a fairly innocent question that sends Evie into a rage. Dixie has pushed a button without knowing it, opening up Evie’s fears and threatening her secrets.

Then, tragedy strikes. Dixie’s father goes away on a business trip, but he is gone too long. Slowly, it is revealed that he attempted suicide, but managed only to render himself brain dead. When his children see him in the hospital, they have to face that fact that he will not recover and must be allowed to die.

Evie is so frantic that she accepts Ray’s offer to come down from New Hampshire to help out. At first, Ray seems truly concerned for the family’s well-being, but it is soon clear that his seeming generosity is a shield for his darker needs. His money assures their indebtedness, and it keeps Dixie’s mouth shut when he presses himself upon her.

A third tragedy springs from late revelations that I dare not give away.

Throughout, it is Everhart’s fine-tuned portrayal of Dixie’s suffering, determination, hopes, and steady maturation that draws readers in and creates suspense. Bratty as Dixie can be, one can’t help but care about her, sympathize with her, and admire her gumption even when she’s making mistakes. When Ray tells her that no one will believe any accusations she makes against him because she is known to be a liar, Dixie is determined to break the dangerous habit. While the book’s title is unfortunately bland, it is also accurate.

The flavor of the American South that Everhart bakes into her story is not at all bland, but rather filled with an evocative, bittersweet aftertaste. The town in Perry County is the only home Dixie and AJ have known, and they are quite comfortable with everything about it except the raw emotions within the family.

It is easy and convenient to drop this novel into the “coming-of-age” box. Too easy and quite unfair. It is that and much more. This is an astute psychological novel, a harrowing account of sexual abuse, and a multifaceted portrait of the differences between a place and a home.