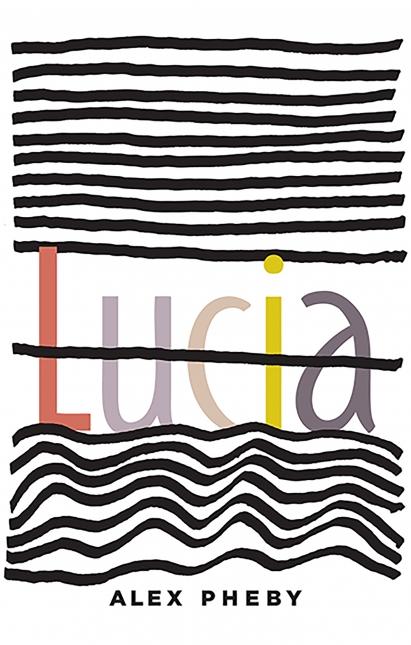 Author Alex Pheby writes in his introduction to Lucia, his fictionalized biography of James Joyce’s daughter, “This book is intended as a work of art.” If you choose to read it, hold that frame in mind.

Diagnosed as schizophrenic and treated in multiple clinics, Lucia Joyce outlived — and, in Pheby’s pages, out-suffered — her father, mother, and brother. Usually, she is just a footnote in her famous father’s life, cited for her madness and her passing connections to Beckett, Calder, and Renoir. Here, Pheby focuses on Lucia herself, dramatizing her experience of suffering, exploitation, rejection, and neglect.

The author introduces readers to Lucia from the point of view of the mortician preparing her elderly body for burial. The undertaker proceeds with the casual, perfunctory attitude of one for whom this is a daily task:

“Nothing unusual — leaner perhaps. Bony like a bird. Swan. Long neck. Three and six on the box and half a crown on silk. Save on the wood — no reinforcement. Save on the wadding — no need, can’t weigh more than a child — halfway to a skeleton.”

Throughout the novel, Pheby continues to reveal Lucia most often through the eyes of others, usually men, underscoring her objectification and mortification. To further emphasize this point, Pheby also employs a parallel story told in alternating chapters. An Egyptologist has discovered a mutilated, eviscerated female mummy. She has been gutted and robbed of the totems that, according to ritual, would have guarded her passage into the other world. Fascinated at first, the archeologist becomes increasingly dismayed and protective of this ruined husk.

The pages of these chapters are adorned with elegant Egyptian friezes; the chapter headings of Lucia’s pages include unexplained Egyptian words: “The Ib and the Ba of Lucia Joyce,” for example. This decorated, cryptic novel, then, is a book of the dead — for and about two mysterious women.

But Pheby does bring Lucia to vivid life through the weary, exasperated words of family members, erstwhile lovers, caregivers, and psychiatrists. Almost all describe failed interactions and relationships. Attempts to connect with Lucia are misguided or inadequate at best, cruel and abusive at worst. Lucia is revealed as a damaged, tormenting, and tormented martyr. Vicious emotional and physical cruelty is recounted sometimes in cool, clinical prose.

Lucia herself becomes the point-of-view character rarely, speaking in almost hallucinatory rants. By accretion, a surrealistic portrait emerges of a captive woman. Lucia is trapped in a world devoid of warmth from anything but the matches she steals, strikes, and chews, and the fevers induced by terrifying hydrotherapy.

Lucia’s life, as portrayed on these pages, is a crescendo of escalating victimization verging on martyrdom, making Lucia a problematic character for the reader to engage with — as she apparently was in life. Her illness here is attributed to familial neglect and failure, and to predation, abuse, and assault by men. The enforced psychiatric treatments are further abuse and assault. That she persisted in living despite this degree of pain is remarkable. Had Pheby explored that apparent strength further, it might have rendered his Lucia more accessible to readers.

Full disclosure: I came to this book ignorant of Lucia Joyce and similarly ignorant of Egyptian funerary customs. My lack of background knowledge was a handicap. Seeking context, I borrowed Richard Ellmann’s biography James Joyce. Lucia did not even appear in the index, so I skimmed the pages, searching for her. I found references to worried, haphazard efforts by James Joyce on his daughter’s behalf and to his denial and misunderstanding of the degree of her distress.

No surprise that biographer Ellmann and novelist Pheby see their subjects differently. After all, in family life itself, conflicting points of view on cause and effect, accidental harm and intentional cruelty, are customary, especially for a family in trouble like the Joyces, struggling with alcoholism and mental illness.

After my cursory attempt to ground my reading in context, I returned to the puzzle of Lucia — somewhat out of a sense of obligation to the author and to Lucia herself. I felt I should not turn away, not be put off, but reading this novel was hard going. My ambivalence and challenges as a reader may testify to the author’s success in depicting Lucia Joyce’s experience and reflect (intentionally or otherwise) the difficulty of being close to her.

Mental and emotional distress of this degree exact a terrible toll on both the one in torment and those around her. Recreating that intense pain is the challenge the author takes on at the risk of numbing the reader. Although obstacles abound in her life and in reading this account of her life, Lucia Joyce is given here, by Alex Pheby, voice and fictional witness, attention, and recognition.