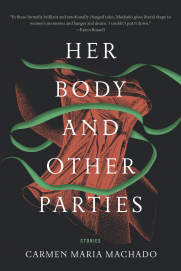 It’s a scenario aspiring authors can only dream about: Your first book is finally due for publication, the buzz is building, people in the know discuss it a bit breathlessly and say things like “hotly anticipated,” and then, the unimaginable happens. The book, your book, is longlisted for the National Book Award — before it’s even released.

Welcome to the world of Carmen Maria Machado.

Machado’s short stories have appeared in a host of big-name venues and garnered numerous awards, including a Pushcart Prize Special Mention, which is why folks have been awaiting this first collection. Her work is brazenly unapologetic, or perhaps unapologetically brazen. Her fearlessness, combined with some spellbinding writing, delivers stories that are at once discomfiting and revelatory.

Included with the advance reading copy of Her Body and Other Parties was a bookmark — a short length of green satin ribbon, which matched the ribbon featured on the book’s cover, which, in turn, matches the ribbon that features prominently in the first story of Machado’s collection, “The Husband Stitch.” And what a story it is. A grad student could write her entire thesis on it, unpacking layer after layer and holding each up to the light to understand its composition.

She could start with the “husband stitch” itself, a reference to men wanting doctors to sew an extra stitch or two in closing up their wives’ mid-childbirth episiotomy to make things “nice and tight” once again.

From the narrator’s recurring suggestions for what to do “if you are reading this story aloud,” including, “force a listener to reveal a devastating secret, then open the nearest window to the street and scream it as loudly as you are able”; to her description of her voice as “high-pitched, forgettable” and all other women’s voices in the story “interchangeable with my own”; to the mentions of the ribbons — in different colors and placement — worn by other women: There is much to unpack.

The narrator’s own ribbon is around her throat, and it is a source of enduring fascination for the boy who eventually becomes her husband. She only has two rules for him, and after they get married, there is only one rule: He cannot touch her ribbon. Eventually, their beloved son is drawn to the ribbon also, and she has to scare him to keep him from trying to pull at it. In this happy family, the ribbon is the one consistent source of tension.

There is something fantastic in each of these stories, less magical realism than the physical embodiment of an otherworldly dread. “Eight Bites,” for example, very literally answers the question, “When you lose weight, where does it go?” It’s impossible to tell whether the baby in “Mothers” is real or an extended fantasy about the children the narrator wishes she and her lover had brought into the world.

And while a mysterious virus is steadily wiping out all of humankind in “Inventory,” the wasting affliction in “Real Women Have Bodies” only targets women — and incidentally offers a fine metaphor for any woman who has ever pondered, “I know I’m here; why do I feel as though I’m invisible?”

What to make of “Especially Heinous: 272 Views of Law & Order: SVU,” in which the author rewrites 12 seasons of episodes and provides them here with titles and synopses? In this retelling, Detective Benson is haunted by all the women whose murders remain unsolved, but Machado actually gives us a lovely story arc with a gratifying resolution. (I doubt even she could have done anything redeeming with “Criminal Minds.”)

Though Machado’s stories have been featured in “Best Women’s Erotica,” the suggestive elements are matter-of-fact and organic to the stories, never an end in themselves. The narrator in “The Husband Stitch” is not shamed by her desires, whether or not society considers them unseemly.

In relating a story in which a girl asks her lover for an act so perverse, he and her family have her committed, she says, “I don’t know what deviant pleasure she asked for, though I desperately wish I did. What magical thing could you want so badly they take you away from the known world for wanting it?”

Except for “Heinous,” all the stories are in first-person, and Machado never puts names to her narrators. The closest she comes is in “The Resident,” which feels the most autobiographical of the stories. That’s not only because the narrator’s initials are C.M., but because it features a favorite trope of young authors: writing residencies.

Machado appears to pick the subject precisely for the cliché, though, and the dread here is much more grounded in the stuff of everyday. That includes being thrown in with dreadful people, such as Lydia, whose “feet were bare and filthy, as if she were trying to prove to everyone she was an incorrigible bohemian.” When the inevitable smackdown arrives, our heroine delivers the coup de grâce by bellowing, “I have never had less of an obligation to anyone in my life, you aggressively ordinary woman.”

C.M. permanently disposes of the notes for her residency novel (along with her laptop, to ensure there is no going back), perhaps signaling that Machado herself is committed to the short story as her literary vehicle of choice. Good. It’s the perfect one for her tightly wrapped fiction. Plus, it offers her readers time to come up for air before plunging into the next intense tale.

[Editor’s note: Her Body and Other Parties is now a finalist for the National Book Award. The winner will be announced Nov. 15th. Click here for more information.]

Jennifer Bort Yacovissi’s debut novel, Up the Hill to Home, tells the story of four generations of a family in Washington, DC, between the Civil War and the Great Depression. Jenny is a member of PEN/America and the National Book Critics’ Circle, and writes and reviews regularly for the Independent as well as the Historical Novels Review of the Historical Novel Society. She is the conference chair of the 2017 and 2018 Washington Writers Conference.