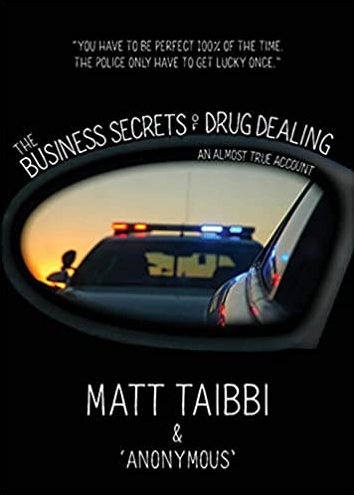 TV viewers have gotten heavily involved in the illicit drug trade in recent years. “The Wire,” “Breaking Bad,” “Ozark,” and many other series have made the thrill, profit, and danger of drug dealing accessible to watchers safe at home. Matt Taibbi and “Anonymous” offer a literary version of this vicarious immersion in their tale of a young Black marijuana dealer in the first decade of the 21st century successfully dodging death and prison, The Business Secrets of Drug Dealing: An Almost True Account.

All these dramas offer up the everyday side of criminal life: talking with friends, shopping, complaining. Ordinary folks are meant to appreciate how thin a line there is between normal and aberrant — how any of us, under the wrong circumstances, could stumble down the evil path. What keeps the voyeuristic appeal strong are the depictions of murder and other acts of mayhem that remind us what separates these alien lifestyles from our own humdrum existence.

There’s no murder in this book and very little violence, which makes the story all the more relatable. Yet, unlike most of us, characters routinely fill their trunks with pounds of weed, bluff their way through border crossings, spar with the police, and do time. While such activities of course occur in real life, Taibbi announces in a solo author’s note that the events described are all fictional — that only certain “observations and thoughts” of the protagonist are authentic.

Despite this disclaimer, it’s hard not to wonder if Anonymous really had an intriguing encounter with former Democratic vice presidential candidate John Edwards while tending a hotel bar in Indiana. Was he really a high school class president and track star before getting full time into dealing? We’ll never know, but it’s fun to imagine.

As is true of the criminal justice system’s approach to drug enforcement, race is never far from the center of the story. In the narrative, Anonymous is given the racially freighted pseudonym “Huey Carmichael,” a blending of the names of prominent Black Power proponents Huey Newton and Stokely Carmichael (as John Edwards points out in what must be a fictional part of their possibly real encounter).

Huey often notes with casual bitterness the relatively carefree lives of white drug dealers and users, for whom positive prejudice combines with family connections and money to keep police attention and criminal penalties comparatively light. And as pot becomes ever more legal in ever more states, big operations generally run by wealthy white people are trying to reduce the competition by barring from the industry convicted felons — the mostly Black dealers who dominated the trade during its prohibition.

The racial divide is one of the sources of humor in a book full of funny lines. Huey laughs that the parents of a Caucasian contact christened Logan Nelson “might as well have named him white person.” He describes a drug buy as so full of details ripe for later legal wrangling that it looked like “a goddamn Supreme Court case waiting to happen.” (“Goddamn” is a mild entry in the book’s lexicon of profanity that could deter any reader shocked by harsh language.)

Huey credits part of his success to a low profile: He maintains a regular job as cover, drives a drab car, and, with a few exceptions, no one knows where he lives. Unfortunately, this same obscurity often clouds tales of his cross-country and even international exploits, making it hard to know where he and his compatriots are or how they got there. A drug runner driving from Detroit to Cincinnati for some reason goes via Buffalo. Huey simultaneously flies and drives to Indianapolis. And for several chapters, it’s not clear whether he’s in Oakland or Canada.

There are other flaws, as well. The story’s conversational style can be needlessly repetitive, especially at the beginning. And — alarmingly for a drug dealer — there’s a cash miscount: A tripling of investment is misreported as a doubling. A gimmick of offering italicized rules to live by (“Deal with as few people as possible”; “Dress like an off-duty Applebee’s waiter”) is overused at first, then peters out.

Yet the goal of humanizing the criminal is achieved. Huey is a fully realized character whose hopes, suspicions, wariness, and weariness are all recognizable. Especially since he’s dealing in a substance so benign that it’s rapidly being decriminalized even as he peddles it on the sly, it’s easy to root for him to outsmart the cops and outplay his competitors.

But he knows his luck can’t hold forever. After a mystery is solved that probably owes more to Taibbi’s imagination than the real-world tales of Anonymous, Huey winds up abiding by his perhaps most important rule: Get your money and get out. His choice of new career further demonstrates the similarities between the straight life and the crooked.

The ease with which we identify with the ostensible bad guys in fiction (and even semi-fiction) reveals a weakness in our traditional culture and morality. Institutional racism is an obvious source of rot. Matt Taibbi and his hidden co-author don’t explain the phenomenon but provide ample evidence that it persists.