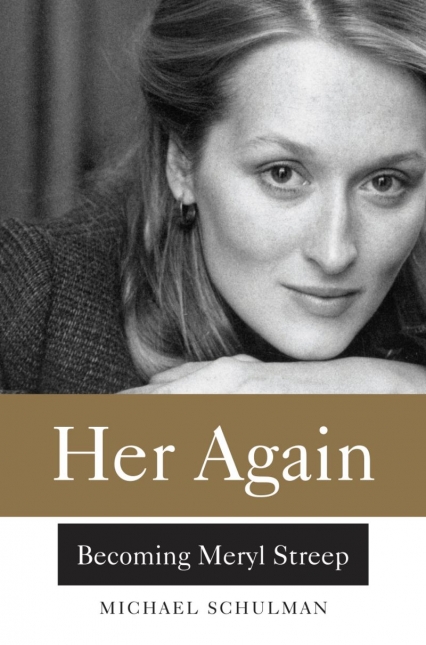 What’s really going on inside the luminous head of Meryl Streep? What is the core of the prodigious talent that has earned her, to date, 19 Academy Award nominations and three wins? How has she been able to morph, almost spookily, into so many different movie characters?

Sophie in “Sophie’s Choice,” her second Oscar (1982); Julia Child in “Julie and Julia” (2009); and Margaret Thatcher, for Pete’s sake, in “The Iron Lady,” her third Oscar (2011). Such a range suggests an impressive level of empathy and a hyper-ability to observe and store data for future use. Indeed, she has reportedly said, “The great gift of human beings is that we have the power of empathy.”

And what about that Dickensian-sounding name? It’s her real one: “Meryl” is a mishmash of “Mary Louise.” Her mother came up with it because it was easier for the little girl to pronounce. Meryl was unique right from the beginning.

New Yorker writer and editor Michael Schulman sets out to drill deep in his new biography, Her Again: Becoming Meryl Streep. It’s important to note the book only goes to April 14, 1980, the night Streep won her first Oscar, for Best Supporting Actress, in “Kramer vs. Kramer.” As a result, there are only half the usual number of photographs of such a famous and photogenic person. At first glance, and given its truncated chronology, the book seems underserved.

The title jumps the chronology: “Her, again?” is what Streep said when accepting the Oscar for Best Actress in “The Iron Lady” on February 12, 2012. In what was by then typical Streep style, she wryly anticipated the audience groaning at her getting yet another award. Schulman, in medias res tradition, kicks off the book with that night, a cleverly tantalizing setup for Streep, Part II.

Another important fact to know about this and any biography of a living person is that Schulman did not have access to his subject. He obliquely, gracefully thanks Streep in the acknowledgments: “Thank you, also, to Meryl Streep, for living a fascinating life, and not throwing up any significant roadblocks.” For those of us who read a nonfiction book’s acknowledgments page first, that sentence is code for: She wouldn’t talk to me, but didn’t put out a gag order, and I really hope she’s not hostile after reading this book.

Since publication, Streep has issued a statement that the biography is “unauthorized,” she had nothing to do with it, and hasn’t read it. Maybe she will write her own book. But that might spoil the mystery — and is unlikely, anyway, given her cool, bemused detachment from anything personal. The lady is elusive.

Caveats aside, Schulman has written an engrossing examination of Streep’s background, her childhood in the New Jersey suburb of Bernardsville, schooling (Vassar undergrad and the super-demanding Yale School of Drama, which fellow student Wendy Wasserstein dubbed the Yale School of Trauma), and her immediate and meteoric rise in the Joseph Papp-dominated world of New York theater in the 1970s.

Once she stepped onto the stage and realized that that’s where she wanted to stay, the result was phenomenal. In her first season in New York, Streep landed parts in back-to-back Broadway plays, a Tony Award nomination, and two roles in Shakespeare in the Park productions.

Working within the limitation of not actually talking to her, Schulman is good at showing how meticulously Streep worked before and after that quick rise to build her craft. It didn’t come easy. But she made it look easy, with a “no drama” professionalism and imperturbability. It didn’t hurt that she had a beautiful singing voice and could do a standing backflip.

Without giving a spoiler, the most personal and moving section of the biography is about the doomed love affair between Streep and the gifted character actor John Cazale (Fredo in “The Godfather,” among other roles). And you’ll have to read the book, the cover story of April’s “Vanity Fair,” or this story in Jezebel to get the juicy story behind the making of “Kramer vs. Kramer” that’s gotten a lot of attention.

Schulman is lucky that Streep has given thoughtful interviews over the years, and he quotes from them extensively. He also interviewed some friends, colleagues, and former boyfriends. Yet the book, indeed, ends up feeling a tad thin.

The great actress remains inscrutable, which is no doubt the way she likes it. However, one early anecdote suggests the real iron lady within — and makes the reader hungry to know more.

At the graduation ceremony from Yale Drama in 1975, the class marched in wearing the usual dark caps and gowns — except Streep. She wore a bright white summer dress and stood out, as Schulman says, like a “diamond glistening in the muck.” Recalled William Ivey Long, “All the rest of the women in the class went: ‘Bitch. Why didn’t I think of that?’”

Kate Buford is co-founder of Biography By Design LLC. Her award-winning Native American Son: The Life and Sporting Legend of Jim Thorpe was an Editors’ Choice of the New York Times, and Burt Lancaster: An American Life was named one of the best books of 2000 by the New York Times and other publications. Buford has written for the New York Times, Film Comment, and Bluegrass Unlimited, among other publications, and has appeared on numerous television shows, including “Charlie Rose” and “History Detectives.” A commentator on NPR’s “Morning Edition” and APM’s “Marketplace” from 1995-2004, she serves on the board of Biographers International Organization (BIO) and of Union Settlement Association in East Harlem, New York.

By Nick Littlefield and David Nexon