The Death of Caesar: The Story of History’s Most Famous Assassination 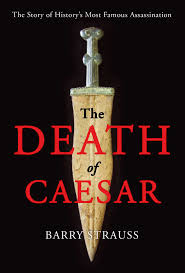 Unfailingly, every year on 15 March, someone I know, and usually considerably more than one, will quote Spurinna, the soothsayer from Shakespeare’s Julius Caesar: “Beware the Ides of March.”

It is a testimony to the apparent endless allure of a conspiracy to murder a man over 2,000 years ago, or at least of Shakespeare’s ability to say something so pithy about it, that it becomes a part of our culture, like “To be or not to be.”

In The Death of Caesar: The Story of History’s Most Famous Assassination, Barry Strauss, professor of history and classics at Cornell University, sets out to explain the conspiracy to kill Caesar, the assassination, and the aftermath in detail, relying on a close reading of the available ancient sources, both textual and archaeological. The result is an almost cinematic examination of the event by a scholar whose love both of ancient history and ancient authors is readily apparent — the flaws of which make his account all the more compelling to my mind.

One of the pleasurable frustrations of those of us who read and teach ancient Greco-Roman history is both the brilliance and the paucity of written sources. A scholar can master all the available sources, but they are so few and often so problematically contradictory that historical certainty is more than elusive; it is highly improbable.

Anyone who wants to understand the assassination of Caesar, then, must be a literary scholar before all else, for analysis of literary texts is the number-one job. There are no surviving archival sources for the event and no public records. Material evidence is more than scant; it is practically non-existent.

The conspirators killed Caesar at Pompey’s Senate House, for example, outside the Servian Walls of the city, and not at the Senate House (the Curia Hostilia) in the Forum, which our sources tell us was under renovation at the time. Of the Curia Pompeii, only part of two foundation walls survive, so when it comes to the appearance of the site of the assassination, as Strauss writes, “educated guesses are the best we can do.”

Another bit of material evidence is also difficult to interpret: a rare coin issued by one of the leading assassins, Marcus Junius Brutus, a year or two after the event. The silver denarius shows on one side two military daggers (pugiones) on either side of a liberty cap (pileus) and the abbreviation “EID MAR” — Ides of March. Few would argue over what Brutus intended with this image: the cap to symbolize freedom from Caesar’s tyranny, and the daggers (one his own, the other Cassius’?) used to achieve it on the Ides of March.

The obverse of the coin, however, is more problematic: It displays a portrait of Brutus himself and the abbreviation “BRVT IMP” — Brutus Imperator. The term “imperator” at the time did not mean emperor, but rather indicated a victorious general.

But putting one’s own image on a coin was highly irregular. It was, in fact, first done only by Caesar himself, prompting criticism from traditional republicans that Caesar was adopting the characteristics of a king. Why would Brutus, who had ostensibly killed Caesar to protect the Roman Republic — as Strauss would ultimately have it — follow Caesar’s practice of putting his own face on coins?

Unfortunately, our sources, writers such as Cicero, Suetonius, Plutarch, and Cassius Dio, among others — all biased and notoriously lacking historical objectivity — provide no clear answers. In his review of The Death of Caesar in the New York Times Book Review, James Romm criticizes Strauss for refusing “to take a stronger interpretive hand” in explaining motives, but I think that Strauss’ love of conflicting possibilities adheres closely to the style of the ancient sources he obviously reveres, and rings true to what we understand of political culture in the late Roman Republic — and, perhaps, of human nature in general.

Romm is also put off by Strauss’ “folksy” style, including his use of “anachronistic” metaphors such as “ace up his sleeve,” when tunic-wearing Romans did not have sleeves. This kind of complaint seems overly peevish to me, for Strauss consciously adopts the style of his beloved ancient writers — and Romans loved to use clever, but clichéd, metaphors, too, but they do not always translate well to the modern world.

In my view, Strauss creates a powerfully contextualized and historicized understanding of the assassination, with a somewhat greater focus on the military aspects of the conspiracy, including the role of Caesar’s general Decimus, than many earlier accounts, including ancient ones.

Strauss’ heart is ultimately with the defenders of the Republic, however. Although he recognizes the contradictions in Brutus’ actions, Strauss’ Brutus dies a Roman Stoic philosopher defending a system of government that should have survived, with only some reforms.

Here, Strauss may be on his weakest ground historically, or at least interpretively. Although I sympathize with his preference for the idea of the Republic over the emerging monarchical rule of Augustus, the Roman Republic was hardly representational or democratic, and by the time of the assassination, it had been in decline for at least 90 years.

In my view, ever since the self-styled “Best Men” (the Optimates) in the Senate assassinated Tiberius Gracchus in 133 B.C.E., and later, his brother Gaius Gracchus, in 121 B.C.E., the republic had lurched from crisis to crisis with ever-increasing violence and corruption as the Best Men (among whom Strauss counts Brutus) strove to defend their rule.

In that period, real power came to lay not in the hands of the Senate, but with victorious generals who commanded armies more loyal to their general than to the Republic: men like Gaius Marius, Lucius Cornelius Sulla, Pompey Strabo, Pompey Magnus, and, of course, Gaius Julius Caesar. In that political context, the only one Brutus could have ever personally experienced, it actually makes sense that he would follow the example of Caesar and put his own image on his denarius.

Overall, Strauss’ account of the assassination of Caesar is a well-researched and powerfully written history, and the quibbles scholars may have with his interpretation do not detract from its contribution. The book will certainly be of use to students of every stripe interested in the history of the downfall of the Roman Republic.

G. Matthew Adkins is a professor of European history at Columbus State Community College in Columbus, Ohio. He is author of The Idea of the Sciences in the French Enlightenment, a Reinterpretation (University of Delaware Press, 2014).