Having and Being Had

An occasionally uncomfortable — and long overdue — exploration of power and privilege. 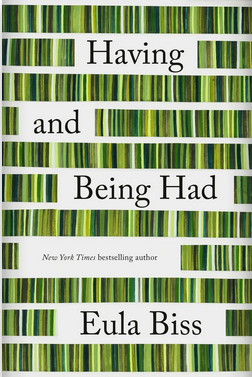 Eula Biss is a master of vivid imagery. In her first book, Notes from No Man's Land: American Essays, a telephone pole transforms from a nuisance and a symbol of communication to the chosen stage for the horrific lynching of African Americans across the country.

In On Immunity: An Inoculation, it is the image of the vampire as a reflection of societal anxieties about disease that still lurks in my memory, especially as a pandemic now rages. For her new book, Having and Being Had, the searing image is the juxtaposition of Biss herself, a homeowner and successful writer, against her mother, who struggles to stay in the middle class: "She still has white privilege, but she often doesn't have hot water."

One of the troubles with taboos is they’re often so uncomfortable that our avoidance of them makes them invisible. Yet Biss is not only unafraid of taboo, she leans into it. She uses the form of the essay to interrogate, break apart, and complicate something in order to make it fully known and understood.

Just like in her other works, Having and Being Had makes the invisible visible. The book examines the slippery and uneasy subjects of inequality, wealth, power, and work. It’s written in short two- to five-page vignettes with brief titles such as "Drag," "Liberation Collection," and "Citizens."

Sometimes, these titles repeat in other sections, creating a strange, whirling effect that feels as inescapable as American capitalism's grinding wheel. Each vignette takes a lived experience from either Biss' own life or the lives of authors she reads and uses it to question a unique aspect of privilege and power.

The style is deceptively simple and often declarative. The arguments are also impressively concrete compared to the cliché- and abstraction-filled ways most people talk about money. Her house in Evanston, Illinois, near Northwestern University, where she is an artist-in-residence, comprises one of the book's choruses.

Sometimes, the home is a backdrop, serving as a vessel through which to talk about her neighborhood or the relationship household chores have to Americans’ labor views. Other times, it’s at the center of the narrative. The house becomes a character: It is a mark of success, a thing that needs to be taken care of, a symbol of history and, of course, a shelter. Other recurring characters include Biss’ husband, mother, and child, all of whom the author writes about with love, albeit in an economic context.

One of the most delicious facets of the book is how it weaves into the discussion of art (including writing) the socioeconomic class and status of those who get to make it. Time, comfort, and the space to create are all commodities that can be bought and sold, given or denied, based on access, class, and gender.

Here again, Biss peers at the issue through a personal lens. She writes that she made $10,000 a year at one point in her life; now, she makes $73,000 a year. This, combined with her husband's income, puts her household in the top 25 percent in Illinois. She includes other vignettes describing her experiences with fellowships, teaching, and the bizarre power trips of advisors, colleges, and elite donors at fundraisers, all of which have to do with power and finances. While talking this openly about money can make a reader squirm, the transparency is disarming and effective.

She is also critical of the privilege enjoyed by some of the darlings of literature, noting that Emily Dickinson had time to write because someone else did the cleaning; describing Joan Didion’s lavish vacations; and positing that, were it not for the help of an underpaid housekeeper/cook, Virginia Woolf wouldn't have written all she did.

These sections about Woolf and other writers are a juicy pleasure to read, but they also show us that time, as much as money, is a marker of privilege and power. Yet sometimes money can be exchanged for time, and time for money, and sometimes it cannot. The discomfort of breaking this conundrum apart and trying to put it back together makes Having and Being Had a marvelous puzzle.

In 2020, the pernicious and frightening banality of the power structure surrounding privilege feels twice as scary. Four days after this book came out, the U.S. Bureau of Labor Statistics reported that 13.6 million Americans remain unemployed, mostly due to covid-19. Meanwhile, Mackenzie Scott, Jeff Bezos' ex-wife, became the world's richest woman after Amazon's stock surged. She is now worth $67.4 billion.

While the discrepancies explored in Having and Being Had are not as vast or as maddening as this one, Biss' ability to note their madness and inequity might be just what we need right now.