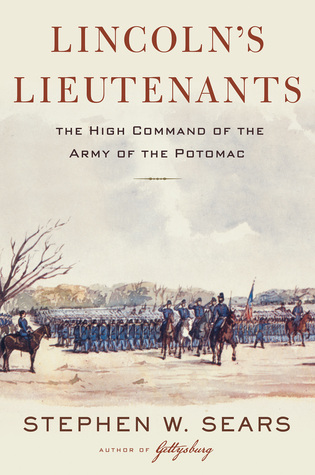 Stephen W. Sears is one of the nation’s preeminent Civil War chroniclers. A dean of Civil War studies, he has distilled the vast body of his work into one jam-packed volume that’s sure to be regarded as the go-to source of this generation of Civil War scholarship. In some ways, Lincoln’s Lieutenants is Sears’ homage to the venerable Douglas Southall Freeman, a writer of an earlier generation who penned the seminal Lee’s Lieutenants.

(For readers of Sears’ previous books, however, there is no need to add this one to your library. You’ve read it all before, and there is nothing new offered, other than the section on the 1864 Overland Campaign where Sears examines Ulysses S. Grant’s serving as commander of the Union Army but riding with the Army of the Potomac in Virginia.)

War is a curious matter, and if there is one thing that stands out about the Civil War, it’s just how petty the high command of both the Union and Confederate armies was. Lincoln proved to be the better master of pettiness when he succeeded in getting Grant to helm the Army of the Potomac.

Jefferson Davis rather embroiled himself in the muck and mire of his petty officer corps, which is what led, in part, to the defeat of the Confederacy. Lincoln was a master of men; Davis, not so much.

Where Sears shines in Lincoln’s Lieutenants is in depicting the dysfunctional nature of the Army of the Potomac from 1861-1864. He is a master storyteller of the back-stabbing vitriol that plagued not just the Army, but Lincoln himself. At times, it seems as if his generals were not only at war with one another, but with the administration, the Congressional Committee on the Conduct of the War, and the cause for which they were fighting.

The commanders in the early years of the Army of the Potomac, Irvin McDowell, John Pope, and George B. McClellan, were either buffoons or egocentric blowhards. Of that trio, McClellan twice had the opportunity to lead the force, but was consistently befuddled by self-induced delusions that Confederate forces were larger than they were.

McClellan, too, believed himself alone to be the savior of the Union, a Union in which he preferred to see slavery remain. Sears, like other writers, is quick to flay McClellan not only for his failure in the field, but also for his disdain of Lincoln.

On at least one occasion, Lincoln had to referee an emotional folderol between his generals. Writing with precision, Sears recounts the runup to the calamitous December 1862 Union defeat at Fredericksburg and the subsequent change of command that followed:

“These eighty days of high drama witnessed a disastrous defeat and a near-disastrous internal collapse of the Potomac army. The generals’ revolt did not bring on the defeat, but it contributed greatly to the collapse and it triggered the change of command. The cabal succeeded well enough in undermining General Burnside but then failed to steer its hero, General McClellan, back to the command.”

Ever the cagey politician, Lincoln sidestepped the ambitions of General Joseph Hooker in early 1863. The president had heard reports that Hooker thought the nation needed a dictator. In his appointment of Hooker to command, Lincoln wrote to the general of his “recently saying that both the Army and the Government needed a Dictator. Of course, it was not for this, but in spite of it, that I have given you the command. Only those generals who gain successes, can set up dictators. What I now ask of you is military success, and I will risk the dictatorship.”

Sears manages to vividly capture the horrors of conflict as well as the vanity of those in charge. By doing so, readers learn the depth of military dysfunction Lincoln had to manage, the behind-the-scenes politicking, and the eventual success of Grant, a leader of whom Lincoln once said, “I can’t spare this man. He fights.”

While no new interpretation of the war is offered here by Sears, the fact that he distills such a complex and, at times, sordid story into one volume is an accomplishment.

James A. Percoco is the teacher-in-residence at the Civil War Trust, the author of Summers with Lincoln: Looking for the Man in the Monuments, and a member of the National Teachers Hall of Fame.