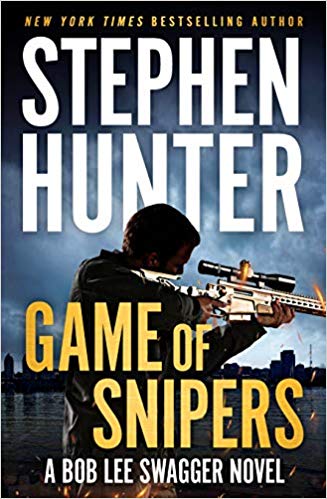 Bob Lee Swagger wants to enjoy his retirement. Now in his 70s, the former Marine sniper spends his time riding horses and observing the local wildlife from his rocking chair. Unfortunately, something or someone always comes along to coax him into a new, life-threatening adventure.

In Game of Snipers, it is Mrs. McDowell, a military-mother-turned-private-investigator, who has spent 15 years trying to uncover information about the contract shooter responsible for her son’s death in Iraq. Rebuffed by the CIA, McDowell approaches Swagger to enlist his help tracking the infamous and elusive Juba, a world-class jihadi marksman who can also be tied to assassinations in other regions.

To learn more from his contacts in the Mossad, Swagger travels to Israel, where he discovers the extent of Juba’s intelligence, ruthlessness, and peerless talent as a long-range sniper — and realizes that the target Juba is diligently preparing for is likely a high-ranking American official, to be killed on U.S. soil.

A high-stakes cat-and-mouse game ensues, as Swagger teams with FBI agents to capture an impossibly slippery and organized killer who is seemingly capable of outthinking and outshooting all of them — even Swagger himself.

Readers who have little interest in the history and workmanship of guns and even less in the transformative effects of shooting them might find themselves wary of the Swagger series and author Stephen Hunter’s well-known, multi-paragraph homages to gunmanship.

However, as evidenced in 2017’s G-Man, compelling for its exploration of the Dillinger gang and the formation of the FBI in the 1930s, Hunter’s meticulous research and attention to detail in gun history and theory are extremely impactful when applied to characterization.

Through the perspective of Baby Face Nelson and details from the large (the brutal Nelson’s seemingly incongruous loyalty and devotion to his wife) to the small (Dillinger’s painful recovery from a botched attempt at plastic surgery), the “bad guys” of that novel are humanized and, if not exactly sympathetic, at least understandable and intriguing: worthy opponents rather than trope targets.

This technique is a crucial point of strength in Game of Snipers, as well, as the narrative alternates between team Swagger’s efforts to capture Juba and the sniper’s attempts to evade them and accomplish his mission.

Glimpses of Juba’s background and perspective seem stilted at first; this is perhaps in keeping with the character, who is, after all, a man who has been trained to repress his own emotions in the service of a cause. At the same time, Hunter unsteadily negotiates complicated ground, explaining the destructive impact of American military actions in the Middle East on the general populace while attempting to avoid vindication of the campaigns of terror spurred by this impact.

He resolves these issues with the added perspective of Jared, a radicalized Arab-American who is more interested in the idea of jihadism than its practice and finds himself in over his head as Juba’s co-conspirator. From Jared, we learn that fraternity and discourse — two things heretofore denied to Juba by his abusive family, his handlers, and his mission — bring out unexpected compassion in the sniper.

Juba’s own thoughts become more relaxed and humanized with Jared in the picture; he allows himself to consider the significance of various aspects of his childhood and even to muse over the pleasure of McDonald’s fries. His dismissal and disgust when confronted with criminals whose motives he considers more financial than ideological emphasize a strength of character, however woefully misguided.

The cumulative effect here is of slowly but steadily introducing American readers to the idea that our 21st-century bogeyman is, after all, really just a human being — even if he has been conditioned not to act like one.

Like Swagger himself, though, Hunter does not take himself too seriously. The suspenseful narrative is sprinkled with wry humor, all the more effective due to its sparseness. Like in G-Man, it includes a secondary mystery — but, in this case, the reveal is genuinely smirk-worthy.

Among the most potent aspects of the novel is that the aging Swagger is an imperfect force, often stunted by impatience, lapses in research and education, and the consequences of hip replacements. This leaves room for Mrs. McDowell — with persistence, watchfulness, critical thinking, and empathy — to assume a place as the novel’s quiet hero.

In his acknowledgements, Hunter explains that, unlike previous novels based on famous historical subjects, Game of Snipers is his homage to a friend who channeled her grief into advocacy for veterans. In this sense, the novel is not only an enjoyable read, but also a fitting and respectful tribute.