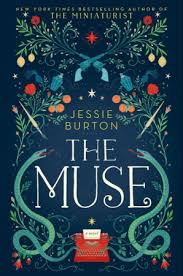 Jessie Burton’s second novel, The Muse, is an historical mystery of intrigue in the art world set in dual locales and time frames: Spain on the brink of civil war in 1936, and London in the swinging 1960s. The intertwined plots revolve around questions of artistic authenticity and provenance, and the dilemma of the female artist.

The author plays out the suspense skillfully, arousing the reader’s suspicions with hints that are remarkable but better understood in retrospect. This complex, multi-leveled narrative is powered by distinctive individuals who represent broad thematic issues — sexism in the world of the creative arts, fascism and anti-Semitism in Spain in the thirties, racism in London in the sixties — without becoming one-dimensional stereotypes. The author alternates between time frames and voices, building up to complex double crises and resolutions.

The story of the thirties, with the initial surprising secrets behind the painting, is told by young Olive Schloss and her maid, Teresa Robles. Olive, a painter, has recently been accepted to the prestigious Slade Art School in London. She is sojourning in Spain with her father, an influential Jewish-Austrian art dealer, and her mother, a British marmalade heiress. Olive falls in love with her maid Teresa’s brother, Isaac, a revolutionary as well as a painter. Personal and artistic trouble develops against the brilliantly rendered background of Spanish expat life as the countryside erupts into violence.

The 1967 story is told by Odelle, a Caribbean immigrant to London, an aspirant writer working in an art gallery. Odelle becomes intrigued by the mysterious backstory behind a painting her boyfriend, Lawrie, has inherited, and brings it to her gallery for valuation — a remarkable allegorical rendering from the thirties, attributed to a Spanish painter, the late Isaac Robles.

Although her boss objects, wanting the younger woman to concentrate on her promising writing, Odelle pursues her affair with Lawrie and an investigation of the painting’s provenance. Ultimately, Odelle uncovers profound surprises and discoveries about her lover, her boss, and the painting.

The interlocking timeframes add interest and perspective to the story, although the scenes in the 1960s London art gallery world seem muted by comparison with the chapters set in Spain. Burton’s prose is vivid and lyrical as she evokes the countryside as well as the relationships between Olive, her parents, Teresa, and Isaac.

Nevertheless, Odelle is an interesting and sympathetic character, engaging the reader in her quest to unravel the mystery of the painting, as well as her struggle to find her voice as a writer. Prior to the international success of her debut novel, The Miniaturist, Burton was an actress. Perhaps this contributes to her ear for Odelle’s occasional Caribbean rhythms of speech, the author’s nimble handling of scene changes, her eye for details of costume and physical gesture, and the double dramatic arcs of the story.

Admirers of Pat Barker’s WWI Regeneration Trilogy who have also read her WWII sequel, Noonday, and readers of Suzanne Joinson’s The Photographer’s Wife, will see thematic links between these three new novels. All concern female artists struggling in a male-dominated world, and interestingly, the Slade Art School figures in each.

Despite this coincidental similarity, this seeming zeitgeist of shared motif and theme, each of the three novels is distinctive. I’ve read all three this season, and each has different and significant rewards for the reader. Joinson’s novel is her second book, following her bestselling debut, A Lady Cyclist’s Guide to Kashgar; Burton and Joinson also share the fortunate dilemma of an anticipatory audience with great expectations.

The epigraph (by John Berger) Burton chose for The Muse provides an apt comment on the eternal possibility for every storyteller, the opportunity to make something unique from history, to mix it with the teller’s sensibility and vision: “Never again will a single story be told as though it were the only one.” Readers who enjoy mystery, psychological drama, historical fiction, art, and intrigue will find much to enjoy in The Muse. Burton’s double story itself is deliciously more than the sum of its parts.

Ellen Prentiss Campbell’s historical novel The Bowl with Gold Seams (Apprentice House, 2016) takes place in the summer of 1945 at the Bedford Springs Hotel during the detention of the Japanese ambassador to Germany. Her collection of stories Contents Under Pressure (Broadkill River Press, 2016) was nominated for the National Book Award. The stories concern women of all ages at moments of transformative choice. Campbell is a practicing psychotherapist and lives in Washington, DC.

The Dogs of Littlefield: A Novel

Who's killing the pooches in this "idyllic" Massachusetts town?