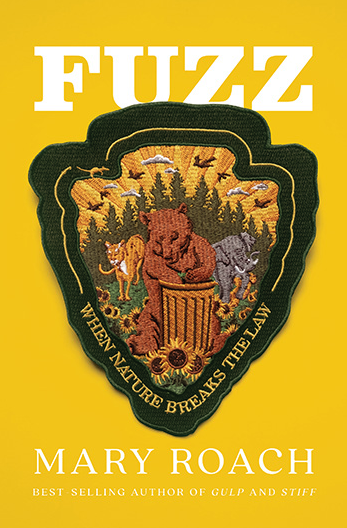 Mary Roach — whose legendary wit and insatiable curiosity have made her a household name — is not a nature writer. She’s a science writer. (Her 2004 Stiff: The Curious Lives of Human Cadavers wasn’t just a New York Times bestseller; it’s one of those books so ubiquitous that paperback copies seem to pop up in unexpected places.)

Yet while her latest book, Fuzz: When Nature Breaks the Law, may use the familiar one-word title structure popularized in her science-centric works, its remit is solidly in the living world. And what she brings here to the genre could inspire readers to seek out other books about the planet’s amazing flora and fauna.

As its subtitle reveals, Fuzz explores various times plants and animals have broken human rules, highlighting everything from murderous cougars and thieving monkeys to sinister birds. Each section — which could otherwise reasonably be encapsulated by a short article — is brought to life by the author’s uncanny ability to find and report hilarious details. In the segment on jaywalking animals, for instance, she quotes a caller to a local radio show complaining that deer-crossing signs only encourage Bambi and his buddies to cross the street in high-traffic areas.

Roach’s style mashes careful science with casual flair and a dash of slang. In describing the Vatican’s shift toward treating animals more humanely, she writes, “Pope Francis has indeed steered the nation according to the world view of Saint Francis of Assisi, the OG of animal activists.” While those of us raised Catholic probably never thought of the saint as the Original Gangster, the term fits perfectly.

Fuzz doesn’t have much of an organizing principle; chapters jump from how to survive attacks from black bears versus brown bears (neither is recommended) to the use of genetically modified rodents to combat invasive species. It’s hard to decide if this scattershot approach is a pro or a con. On one hand, the loose structure makes Fuzz a good beach read (if you lose your place while yanking your towel away from a grumpy seal, it’s no big deal; pick up somewhere else). On the other, the book doesn’t have much flow.

If there’s one surprising and delicious thing that keeps the pages turning, though, it’s the footnotes. Yes, this may sound exceptionally nerdy, but Roach’s optional, scattered little morsels are what make Fuzz a must-read. Not only do these deeply researched tidbits add context, they’re also hysterical. (One such gem explains how airplane engines are tested for bird-collision preparedness by having a bunch of frozen chickens hurled into them.)

Yet dark humor aside, there’s something melancholy about this funny book. Amid its tales of leopards eating people or bears stealing scraps behind pricey Aspen restaurants is an overall sense that, were humans and the rest of the planet in couples counseling together, we’d be deemed the abusive ones in need of figuring out our baggage. It’s we who encroach on and threaten plants and animals, not the other way around.

There are many “nature” books — widely read and otherwise — that urge us to reconsider our relationship with the natural world, including Robin Wall Kimmerer’s Braiding Sweetgrass, Richard Powers’ The Overstory, and Kerri Arsenault’s Mill Town, to name a few. But now that someone with the hilarity and name recognition of Mary Roach has added her voice to the mix, maybe more of us will start listening.