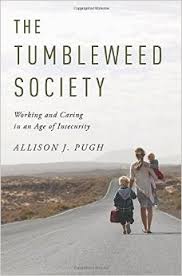 At a time when income inequality in the United States is at the highest level since the Great Depression, Allison J. Pugh’s The Tumbleweed Society: Working and Caring in an Age of Insecurity helps explain the destabilizing force this inequality is having on U.S. society.

Insecurity in the workforce is creating instability in our home lives, locking the working poor in a death spiral of poverty, lack of education, and out-of-wedlock births. With a Proustian eye for observation and a Fitzgerald-like gift for metaphor, Pugh takes the reader on a tour of modern society, which is as rootless as a tumbleweed.

With the rigor of a disciplined social scientist, Pugh interviews 80 groups of parents from all sorts of backgrounds and economic levels and then interprets their experiences through the lens of literature and philosophy.

Her subjects include a working-class tradesman named Gary, a technical worker named Fiona, and privileged “relocators” Robin and Ian. Pugh’s goal is “to discover how insecurity and inequality combine to generate consequences not just at work but in intimate life as well.” She investigates whether the new “one way honor system” at work changes how people interpret their obligations to others.

The answer appears to be different based on one’s class. The well-educated seem to embrace their end of the social contract with employers. For those with in-demand job skills, “insecurity looks more like ‘flexibility.’” They feel they owe their employer great dedication, their best performance, and long hours, but not their longevity. They have the luxury of looking for the best fit between their “job” and “self.” They aren’t satisfied until their work feels meaningful and rewarding beyond just a paycheck.

Conversely, in the domestic realm, these “cultural creatives” adopt a stance of pragmatism in their intimate life: At work, they choose to leave, while at home they choose to stay. Rates of marriage remain high for the upper-middle class, and their rates of divorce continue to decline.

Unfortunately, Pugh’s research seems to confirm economist Tyler Cowen’s thesis in his 2013 book, Average Is Over. As companies require less and less manual labor, the earning power of “average” workers has been decimated. Pugh recounts how, for this cohort, less security in the workforce has led to an inability to commit in personal relationships.

Pugh turns to Wallace Stegner’s Crossing to Safety to explain how the working class copes with their feelings of helplessness. Just like Stegner’s main character, they sweep their uncertainties and anxieties into the “back closet” in their minds and attempt to carry on.

Despite some of Pugh’s disturbing conclusions, she remains hopeful throughout the book. She embraces a kind of “radical pluralism” in our family structures and clings to the vision of a different kind of societal structure that stays anchored even as it grows and evolves. Rather than a tumbleweed society, her vision is of a coral society — one that is vibrant, varied, and enduring.