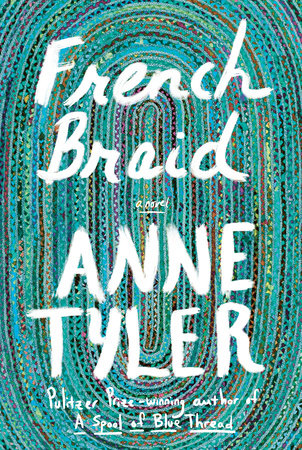 There is a phenomenon at work when the quietest possible story with the sparest of plots still compels a reader to sit for hours and let the tale unspool in its own time, content to see where it will go next — even when it’s clear the path is through familiar territory.

Ah, we must be reading Anne Tyler.

French Braid is Tyler’s 24th novel, and that body of work forms a unified whole of style, place, and character. It is long since readers have understood her universe and eagerly return to it with each new release. Tyler offers literary comfort food without apology; as she noted in a 2015 interview, a reader looks to Philip Roth for “piss and vinegar” and to her for “milk and cookies.”

Still, there’s a perpetual edge to her stories. In Tyler’s fictional families, if anyone actually serves milk and cookies, there’s something vaguely discomfiting about it.

It strikes me that Tyler and Ann Patchett use similar approaches to their work. Patchett’s usual leaping-off point takes a group of strangers and throws them together into an unusual situation to see what happens. Tyler takes a family in situ and throws its members at one another to reveal that they are indeed strangers, too — the question is whether any of them will come to recognize the others as individuals and not simply as caricatures permanently stamped with their assigned roles within the domestic hierarchy.

The idea of family as a collection of strangers locked in predetermined roles is front and center in French Braid, with the lines marked from the outset. We’re introduced to the Garretts obliquely, when one of the cousins, Serena, thinks she recognizes another cousin, Nicholas, standing nearby in Philadelphia’s Penn Station. Serena’s boyfriend, James, finds it amusingly odd that she’s not sure and inexplicable that members of a relatively small family don’t seem to know each other.

When Serena and Nicholas finally chat, Nicholas can’t remember which of his two aunts, Alice or Lily, is Serena’s mother, and asks, “I have a cousin named Candle?” James teases Serena that she describes the geographical distance separating the three Garrett siblings — Alice in Baltimore County, Lily in Baltimore City, and David in Philly — as vast, unbridgeable spaces.

The story rolls on to illuminate that it’s not the geography that is unbridgeable.

It has been observed that the passage of time provides the plot of Anne Tyler novels; here, it is a combination of passing time and successive points of view. From Serena’s chance meeting with Nicholas in 2010, the author whisks us back to 1959, the year of the lone Garrett family vacation.

Robin Garrett is proprietor of his late father-in-law’s plumbing-supply company and has never been able to step away from the business long enough to take wife Mercy and their three children on a vacation. It’s only now that Alice is 17 and Lily 15 that Mercy is finally able to prevail on him to spend a week at Maryland’s Deep Creek Lake. David, at 7, is the only one in the target demographic of those likely to be excited at the prospect.

In this foundational chapter, eldest child Alice is our guide into the roots of the Garretts’ dysfunction — quotidian, familiar dysfunction with a lowercase “d,” arising at least partly from all the things we cannot, will not, say to each other. Mercy is vague in her commitment to fulfilling her maternal duties, preferring to spend time sketching and painting; Alice long ago stepped into the breach:

“Alice often liked to imagine that a book was being written about her life. A narrator with an authoritative male voice was describing her every act. ‘Alice sighed’ was a frequent observation.”

When, at the lake, Lily immediately falls in with a much older boy with a car and a rich family, Alice is desperate for her parents to inhabit their given roles as gatekeepers. Instead, Robin’s acquaintance with another father awakens his latent paternal instinct to bully a reluctant David into proving his 7-year-old manliness, in this case by getting into the water.

It’s good that we spend time with Alice early, when we can sympathize with her circumstance, before she hardens into a judgmental scold and gossip. Her view of her family — Lily as petulant and irresponsible, Mercy as cheerfully, irritatingly inattentive — comes to color ours, so that we join in the judgment.

We pick up again in 1970: With David off to college, Mercy enacts her plan to move gradually into her rented art studio without ever admitting to Robin that she’s leaving — that she’s left — even after she stops coming back to the house to fix his breakfast or dinner.

Mercy’s gambit is both funny and heartbreaking; we never saw her stealthy, steely resolve coming, but neither did Robin, who is left blindsided and uncomprehending, certain he had been doing all that was expected of him.

Tyler often writes about the corrosive effects of family secrets. The lovely twist in French Braid is that there are none — merely a kindhearted, collaborative ignoring of certain truths. Robin is able to maintain his dignity, sure that none of the children realize Mercy has left, and they allow him his fiction.

In one of the most touching episodes later in the novel, the now elderly Lily accidentally meets her nephew Eddie’s live-in boyfriend, Claude, whom Eddie is desperate to keep hidden. When Claude tells him, “Oh, babe. She knows…She knew all along,” Eddie finally realizes his entire family has always known he is gay without ever offering comment or critique.

French Braid brings us all the way into the pandemic and eventually into David’s point of view. Through the years, he has presented a frustrating mystery to his parents and sisters as to why he holds himself at such a remove from the rest of the Garretts.

The women share a quiet, collective blaming of David’s older wife, Greta, whom they see as cold and overly direct, while Robin is certain it’s because he made David work “the summer of the plumber” before he started college. They cast about for specific reasons, but it’s a misguided search.

These are simply the vicissitudes of family; they may think David is absent, but for him, his family is ever-present. And as we watch David and Greta host their son and grandson through a covid summer, we realize how fully, beautifully functional this family has become.