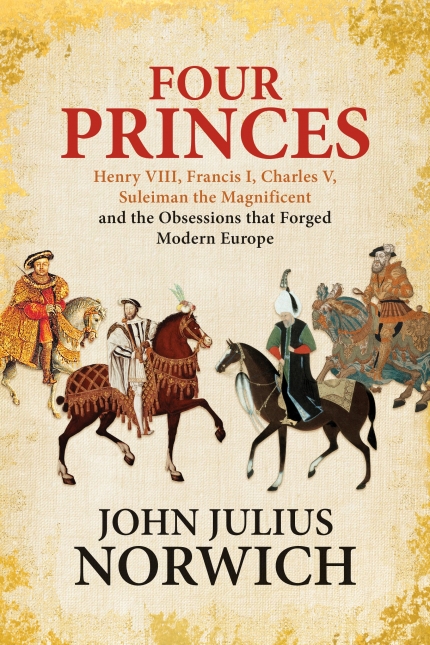 At the age of 87, John Julius Norwich can arguably claim the deanship of English historians, if there’s such a title to be claimed. Norwich has authored more than two dozen books that range widely through an enticing catalogue of subjects. His popular histories have tackled the papacy, medieval English kings and their later Shakespearean avatars, the Mediterranean, Sicily, the cities of Byzantium and Venice, and much more.

The historical record indicates that Charles, Henry, and Francis had met personally from time to time, but only Francis had dealt in person with Suleiman, whom he considered a potential ally in his on-again, off-again wars with Charles. As for Henry, who engaged regularly, and largely ineffectually, with both European monarchs in matters of divorce, war, and alliances, the English king comes across as a bit out of the mainstream in the foursome at the center of Norwich’s book.

The middle third of the 1500s was an era where the parallel practices of war and showy diplomacy played out against a roiling backdrop of religion and belief. On one hand, we find establishment, abuse-ridden Catholicism (flanked by well-meaning Erasmian humanism) facing off against a rapidly proliferating swarm of new Protestant denominations, most notably (but not exclusively) in the northern and eastern reaches of Europe.

At the same time, in the Mediterranean and the southeast, Islamic forces — in the person of Suleiman and his seagoing surrogates — were grinding away at Christian hegemony, a continent-wide status newly won only decades before (in 1492), when Spanish monarchs Ferdinand and Isabella expelled the Moors.

As the 1530s approached and passed, though, Ottoman forces were probing as far north as present-day Vienna, and their Barbary pirate allies were ravaging Sardinia, Corfu, and other Mediterranean islands.

There’s another critical factor in this mix as well. The period between 1503 and 1570 saw nine popes come and go. Some were corrupt, a few of an ascetic bent, others indecisive and vacillating, but all of them inextricably entrammeled in the political, territorial, and (obviously) religious wranglings of the day. In 1529, for instance, the French ambassador reported to King Francis that Pope Clement, suddenly struck with a visceral dread of Ottoman armies overrunning Italy, was contemplating scooping up all the money and valuables he could lay hands on and absconding to Avignon.

But Francis was eyeing the sultan as an ally, and he failed to act on repeated papal calls for joint European action against the Turks. And King Henry was even less interested, having his own difficulties with the papal authority as Vatican bluster and foot-dragging continued to impede his divorce and remarriage.

So Henry looked away from the distant Mediterranean and its putative Muslim threat, focusing instead on his stumbling compulsion to shore up the succession, along with his recurrent obsessions over Charles’ and Francis’ occasional diplomatic flirtations in both war and peace.

Charles V was the only one of our four Christian princes (counting the pope) to mount meaningful military action against the sultan’s forces. He took on the Barbary pirates, Suleiman’s surrogates in the Mediterranean, besting them in North Africa and pursuing them across the sea, but only with temporary success.

His second foray against the Ottoman armies was in defense of Vienna, after the sultan’s forces had vanquished modern-day Hungary. As Charles bumped across the continent to take command of the defenses from his younger brother Maximillian, the Ottomans bogged down and withdrew to Byzantium.

With an unremitting mastery worthy of his age and experience, Norwich marshals just the right details, large and small, with compelling and selective elan, and his cross-cutting presentation drives the narrative relentlessly forward, never allowing it to wallow in scholarly miasma. There are scores of evocative “moments” in this book, set pieces that linger pleasantly in the memory.

Among them: Henry and Francis at the Field of the Cloth of Gold in 1520, their first meeting. Both are tall, vigorous, and handsome (remember, Henry is not yet 30). They decide to wrestle, and Henry is overmastered in the match. Not surprisingly, only the French observers mention Francis’ victory in their accounts of this encounter.

Another: the gracious mercy of the sultan, otherwise cruel and ruthless in battle, besieging the few hundred Christian Knights of St. John at their then headquarters on the island of Rhodes. After holding out valiantly, they finally surrender. The sultan, honoring their courage and determination, allows them to leave unharmed, and they finally settle in Malta.

Yet another concerns Charles and Francis. The Spanish king, having captured the French monarch at the battle of Pavia, imprisons him for a year. He releases him only when Francis agrees to turn over his two sons, children, who are then imprisoned for another five years.

One last scene: One of Suleiman’s commanders takes it upon himself to snatch a famous Italian beauty, hoping to present her to the sultan for his harem. I’ll let Norwich finish the story: “She, however, clad only in her nightdress, managed to escape on a horse, accompanied by a single knight whom — either because he had shown overfamiliarity or because he had perhaps seen too much of her person — she subsequently ordered to be killed.”

Four Princes is filled with marvelous moments like these. If you’re a reader of history — even an occasional one — don’t miss this book.