Don’t Wait to Be Called

In this moving collection, the experiences of hardworking, frustrated Americans are set up beside — not against — refugee trauma. 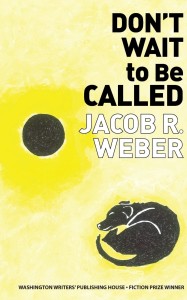 Jacob Weber’s debut short-story collection, Don’t Wait to Be Called, is populated by two distinct sets of characters that have dominated recent headlines: Refugees and blue-collar Americans. It’s tempting, then, to view these 12 compelling tales through the lens of the current political climate, but that would be unfair to Weber, whose incisive prose works to humanize — not politicize — the circumstances of these disparate groups.

Whether they are already Americans or looking to achieve that status, these characters share a sense of being trapped in a world that is simultaneously hostile and indifferent to them.

At its core, Don’t Wait to Be Called focuses on the struggle to escape one’s circumstances. For the American characters, this generally means pushing against the limits of their economic status and a class structure which is difficult to transcend. In “Kian and Maggie,” a beleaguered single mom who lives with her young son on the wrong side of the tracks meets the father of her son’s friend at the park.

“He said what he did, but it only sounded like something that made a lot of money and didn’t have to worry about being squeezed out if his office was thought too small to keep his position. His wife was a doctor who delivered perfect babies into the world.”

The insecurity that she feels reflects itself in her treatment of her rambunctious son as she tries to control him through escalating threats. She is not a bad mother, but she has trouble seeing anything but hardship ahead in raising her child alone.

Inability to see a path forward to a better life is a recurring theme in the stories about Americans. In “What Every Parent Should Know About Brain Injuries in High School Sports,” another single mother works a dead-end job as a waitress at a bar where casual sexism and racism run rampant. Her son’s escape route, playing high school football, is tempered by the dangers inherent in the game.

In another story, “Brokedick,” a Marine returns from service to get a college degree, but faces poor job prospects and literally ends up with a damaged penis.

While the American characters rarely achieve anything that can be considered a triumph, flailing around in lives that seem predestined and set in stone, the refugees in Weber’s stories succeed by refusing to succumb to the horrors they face.

All of them have fled civil war and sectarian violence in Eritrea. Weber, who worked as a translator, knows their world and difficulties, painting a vivid picture of both the circumstances of their arrival and their lives in the U.S.

These are characters who have truly suffered in their pursuit of a better life. Unlike their American counterparts, they seemed to have had a single impossible option — flee — and because of that, their stories are ultimately the most compelling in the book.

One particular standout is “Silver Spring,” in which two refugees pretending to be siblings share an apartment. It unfolds delicately as the man comes to terms with his love for the woman, who refuses to use the stove or turn on the heat because of the horrific torture she endured at the hands of smugglers during her journey.

“She cited economy as her reason to keep the heat off, but Daud knew she was terrified by anything resembling fire. She could not be in the kitchen while Daud cooked, even if it was for her.” The tone of the story, one of finding hope and even happiness after the bleakest of days, marks the best of Weber’s writing and resonates particularly strongly throughout the tales that focus on the Eritrean characters.

These two types of characters — the Americans and the refugees — each inhabit their own stories in this collection. Never do they meet. But, in the end, Weber’s collection leaves a lasting impression on the reader. He has the rare ability to fully inhabit characters of widely varying backgrounds, a talent that makes this set of stories well worth the read.