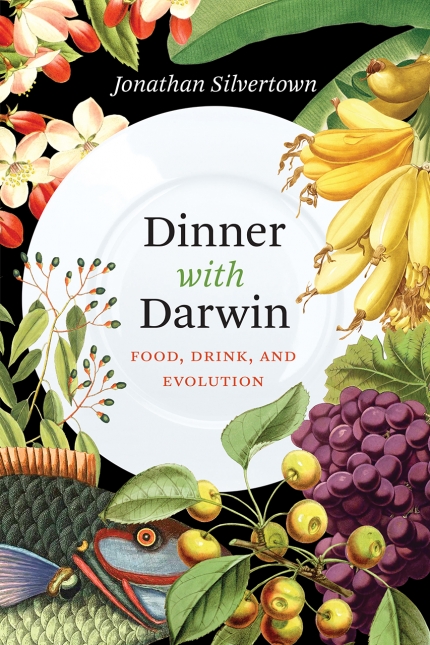 Jonathan Silvertown, professor of evolutionary ecology at the University of Edinburgh, leads off Dinner with Darwin: Food, Drink, and Evolution with a bold assertion. “There are too many books on food,” he writes, and then proceeds with his own contribution to this swelling canon.

Like many of its shelved neighbors, Silvertown’s book discusses the means for producing and preparing the stuff we send down the hatch. But that’s where this superficial resemblance ends. Dinner with Darwin ranges far more widely — and offers vastly more substance — than the common horde of food books.

This is not a candlelit foodie memoir or a “breakthrough” weight-loss manual. Dinner with Darwin is a wide-ranging natural history of our diet, crafted at a pitch-perfect level for the science buff and the general reader alike. Silvertown is also a wonderful writer: erudite, informative, and thoroughly entertaining.

Dinner with Darwin examines the human diet through the multiple lenses of physiology, evolution, and our hominid prehistory. Each of these disciplines has much to teach us about what we eat and how we eat it.

Silvertown takes us on a deep dive into molecular biology, genetics, cultural and physical anthropology, biochemistry, anatomy, ecology, climate science, geology, botany, taxonomy, and a wealth of other subjects. His guiding focus throughout: the evolutionary engine that drives genomic alterations in plant, animal, and human realms, the process responsible for species’ adaptation.

This may sound overwhelming to the non-specialist, but trust me: This book will uplift rather than smother you with detail. This reader couldn’t come up with a single question that Silvertown hadn’t anticipated and answered in his encyclopedic survey.

Here’s a highlight. Early in the book, the author covers in very friendly detail the digestive physiology and cultural ramifications of what we’ve been taught are the major food groups. But Dinner with Darwin throws in a good deal more on the topic.

(Foodies, take note: Silvertown explores, with highly quotable erudition, all the oral and nasal pings and prongs that we experience as distinct flavors.)

I’m tempted to insert a “Did You Know?” roster in this review, but I’ll content myself with just a few highlights. For instance, who knew that shellfish in the Indian Ocean fueled the early human diaspora from East Africa into the Middle East and Southeast Asia? We know this because large piles of fossilized shells tens of thousands of millennia old line our ancestors’ route along the seacoast.

Silvertown’s chapter on bread is his jumping-off point for a discussion of the grain genome and the role of agriculture in the development of human culture. He explains that the cultivation of grains — the earliest and most widespread of food crops — led to the production of bread, and bread was a key driver in the transition to secure communal life and population growth. This opens the way for a fascinating side trip into artificial (i.e., human-aided) selection, as opposed to Darwin’s well-known natural process.

And the topic of desserts gets its own chapter, becoming the platform for discussing how the pancreas, liver, and kidneys metabolize glucose and fructose, those nasty “sweet” organic compounds that plague so many of us. This leads to a long commentary on insulin resistance and metabolic syndrome, key factors in the development of diabetes and cardiovascular ailments.

But easily the most thought-provoking chapter is Silvertown’s discussion of vegetables, where he describes the evolutionary “arms race” between plants and their antagonists — invertebrate, vertebrate, and human — that attack and attempt to eat them. The secret weapon of many plants in this war? Poison.

There are 4,000 venomous plants in the human diet, and they need to be cooked, processed, or selectively bred to neutralize their toxins. Tomato and potato plants, for instance, which originated with the Incas and were brought back to become European staples, were all toxic in their original, raw forms. (The skins of potatoes still are, at least when they take on that curious green tinge.)

Silvertown concludes this, his seventh book, with a view of the future, with all its intimidating implications for our diet and food supply. No anti-GMO crusader, he describes the coming challenge of feeding a planet beset by climate change, more frequent drought, and a rise in sea levels (among many other factors) with a clear and hopeful prescription: “While the challenges for a second green revolution are greater than those of the first, the genetic tools at our disposal are enormously advanced over those available to the crop breeders of the 1950s and ‘60s.”

Bob Duffy is a Maryland writer and consultant in advertising and branding.