Racial tensions erupt in this winning, post-Civil War story based on the author's real-life kin. 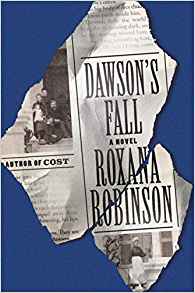 It can be challenging to create a fictionalized account of people who achieved moderate fame in their own lifetimes, but this is what Roxana Robinson attempts to do in her new novel, Dawson’s Fall. The author brings to life the stories of her great-grandparents Francis Warrington Dawson and Sarah Morgan Dawson — he the editor of the Charleston News and Courier, and she the author of A Confederate Girl’s Diary.

Francis was born Austin John Reeks in London. Impressed by the states’ rights aspect of the Confederate cause, Reeks left England on a Confederate ship to join their cavalry, changing his name to avoid bringing disgrace upon his family. Sarah’s previously well-to-do family, having lost everything in the war, fled Baton Rouge, keeping just ahead of Union bombardment. She met Francis through her brother, who was a soldier.

At the core of the novel is the love story between Sarah and Francis. In a letter to her, he writes that his “lips refuse to be sealed & can no more refrain from telling their love for you & to you than they can cease to breathe the fragrant breath of life.” Their narrative continues until the end, each sensing what the other is thinking, as if their two minds are one.

However, the book is much more than just a simple romance. Taken as a whole, the couple’s story reads as a reflection of America in the years after the Civil War, defined by reinvention, race, and the ideal of honor.

The author portrays reinvention prior to and throughout the war in many ways, beginning with Francis changing his name. Sarah and her family are in ongoing flight, and the horrors of war make their indelible mark upon Francis, highlighting the constantly shifting backdrop against which this novel takes place.

The necessity for reinvention continues after the war, in a South where those who were once slaves are now in power, holding majorities in the legislatures and serving as law enforcers. The former slaveowners are reaping what they have sown, particularly in South Carolina, which was home to some of the largest slaveholders in the country.

In a scene central to the book, whites in the town of Hamburg take umbrage at being subject to a militia of African-American troops. As was often the case, this leads to violent conflict designed to teach the former slaves their places. Several militia members are cornered and slaughtered by resentful whites.

As Francis writes in an editorial in his paper on January 2, 1889, “To the people of the South the race problem is the most stupendous problem of the century...All expedients for its solution which are not grounded in the spirit of absolute justice...will fall to the ground.”

This is not what subscribers want to hear; they flee the paper for a more scandalous local rag that traffics in the sort of trashy headlines people desire.

Of course, an examination of race in the South would be incomplete without the issue of lynching. It is one of the more graphic horrors of American history, and Robinson does not shy away from discussing it. Francis is a stalwart opponent of the act, a stance that Robinson uses to represent his honor.

That honor is put to the test when Francis is called to editorialize about a group of black residents who lynch a white man who has been acquitted of rape. When a white woman is a victim of assault, lynching is considered “a necessary act.”

For those who seek justice for former slaves, this reversal is an opportunity to even the scale. Francis disagrees. Instead, he argues, “All lynchers flout the law. No one should be above it.” This position costs him the black support he has heretofore enjoyed.

If there’s a criticism to be found in this book, it’s in the rambling nature of the first half. Perhaps the changing time periods are necessary to set the stage for the action to follow, but they make the novel hard to follow at points. It grows much stronger toward the end, when the focus is on the central timeline.

Dawson’s Fall is a thoroughly enjoyable read, and Robinson does a wonderful job of telling the story of two enterprising and courageous people who are nevertheless not in total control of their circumstances. Her real victory is in engaging us with historical people and in drawing parallels between their lives and the life of America at the time. This may not be beach reading, but it is worth the purchase to add balance to the lighter fare in which we sometimes indulge.

Nothing to See Here: A Novel

Flammable twins melt the heart of an icy young woman in this charming, offbeat tale.