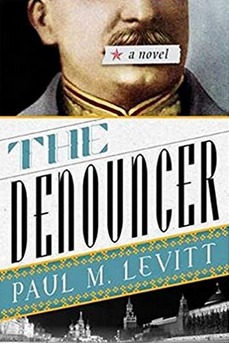 The Denouncer is an historical novel set in one of the darkest eras in the history of the Soviet Union — the totalitarian regime of Joseph Stalin. The novel follows the life of Sasha Parsky. A peace-loving young man raised on a farm, Sasha has no interest in politics. His love of books has earned him higher education opportunities, but when the secret police arrive to take away his parents, Sasha kills the two officers without thought, almost instinctively. His parents are left wondering, “Who really is this Sasha? For that matter, who is any Russian?” These questions lie at the heart of the story.

Sasha is quickly picked up by the secret police and held temporarily as a suspect. Even there, he is suspicious of his fellow detainees who might be spies placed to obtain information on him. When the world consists of denouncers who inform on other people, even friends and family, to save themselves, to win favor, or the position held by the denounced, who can be trusted? And worst of all, who can trust himself in such a dystopian society of broken promises, where the sins of the Tsar and the Church have been replaced with far worse.

As a fellow detainee complains to Sasha:

“They promised religious freedom and then closed the churches. They promised the different nationalities the right to continue their cultures and then suppressed them. They gagged the writers and promulgated their own form of art. They restricted the right to travel. They promoted hacks and exiled genius. They introduced the cult of personality — Stalin’s — and imprisoned the former comrades. It’s intolerable.”

And yet there is no choice but to tolerate the repression, or face the miseries and almost certain death of Siberian work camps...or worse. This is Sasha’s world, and it is dark, indeed. His flight from the murder scene leads him into encounters with the police, where he quickly denounces his parents in order to save himself from suspicion, while simultaneously holding an internal view of himself as someone who would never do such a thing — a seemingly necessary contradiction for survival with dignity.

Recognized as a man of learning and a potential tool in the machinations of a particularly sharp OGPU (secret police) supervisor, Boris Filatov, Sasha becomes the new director of a school in a provincial town with orders to befriend and report on the former director. Filatov also directs Sasha to make contact with the families of the two dead policemen he killed, and Sasha becomes romantically entangled with the widow of one, while the brother of the other becomes a hated enemy.

Sasha is full of fervor to liberalize the fossilized school, to change the primary teaching philosophy from “how?” to “why?” But at every turn, he runs into the tangled web of secrecy, spying, and jealousy and, despite his determination to live outside of these basic “rules” of Soviet society, he finds he is helpless to do so and must be a web-spinner, as well, if he wishes to survive.

The Denouncer successfully does what historical fiction should do — sweeps the reader into a different time and place, though it may not be a comfortable time or place. Written in a heavy, omniscient narrative style that suits the novel’s mood and period, Levitt’s story is a study in internal dialogue that often feels it belongs more to the author than the characters, but is richly littered with philosophical and political insight, such as, “Patriotism may be the last refuge of a scoundrel, but it is the first stop of a rising politician.”

Western thought tends to lump communism into one pot, and to attribute the failure of communism as a political system as inevitable because of its opposition to capitalism. But The Denouncer awakens the reader to the nuances between the political philosophies that arose in Russia after the revolution that overthrew the tsarist system, and leaves us with a warning that every society, no matter how it categorizes itself or how well-intentioned its origins, is vulnerable to the elementary force of the desire for power.

T.K. Thorne is a retired police captain in the Birmingham Police Department and the author of an award-winning historical novel, Noah’s Wife, and a nonfiction historical book, Last Chance for Justice: How Relentless Investigators Uncovered New Evidence Convicting the Birmingham Church Bombers. She lives on a mountaintop in northeastern Alabama and writes there, often with two dogs and a cat in her lap.