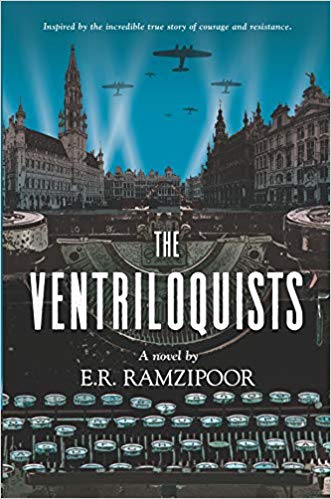 This astonishingly original debut novel draws upon a little-known piece of WWII history and the text of a journalistic hoax. It pays homage to the human spirit that can thrive in the midst of the cruelest oppression.

The Ventriloquists begins with, and often returns to, the need for someone to ask and answer questions. The questioner, a woman named Eliza, has heard something about this historical event and, fascinated, has spent 12 years tracking down a witness or participant. Now she has found one, an old lady named Helen.

While author E.R. Ramzipoor often returns to the present-time conversation between Eliza and Helen, Helen’s story (or Eliza’s transcription thereof) reaches into a past in which the hoax was hatched and executed.

We are introduced to the main players: Their names, nicknames, personalities, and experiences are slowly, vividly revealed. For the most part, the narrative is set in occupied Brussels, with some scenes in the small Belgian town of Enghien. The principal character is the main instigator of the grand charade, a journalist with a comic flair named Marc Aubrion (nicknamed “The Jester”). He is an intuitive planner and improvisor.

Among the other six key characters are prostitute/smuggler Lada Tarcovich; David Spiegelman, who can write in the voice and persona of others; and Gamin, a girl disguised as a boy, who sets fires, creates confusion, picks pockets, and carries out risky tasks in service to Aubrion’s scheme.

They and others form part of the resistance movement that wants to block the omnivorous Reich, as well as Russian expansion. It is late 1943, and resistance forces are stalling until the Allies arrive.

To implement their plan for replacing an edition of the Nazi-propaganda-filled Le Soir with their own send-up version, Faux Soir, the conspirators need paper, ink, typewriters, typesetting machinery, a distribution system, money, hiding places, and storage space.

They must also fool, among others, August Wolff, the regional Nazi paramilitary officer. Working under Himmler, Gruppenführer Wolff is somehow fooled by this motley crew, whose members agree to aid the Axis with their journalistic and other talents. Their skill at deceiving him is another kind of ventriloquism.

The novel explodes with released suspense every few pages as the chapters and their subdivisions shift from character to character, setting to setting, and obstacle to obstacle. Eventually, the critical needs of the Faux Soir scheme are met, but not without close calls and tragic losses.

All along the way, time is of the essence. Faux Soir must come out on the same day that Le Soir is due to hit newsstands. Author Ramzipoor amplifies this time bind with “countdown” chapter headings: “17 Days to Print Afternoon,” 15 Days to Print Late Morning,” and so forth.

Readers are ushered back to the storyline’s ongoing present (with Aliza and Helen, the latter of whom is the much older incarnation of Gamin) via headers like “Yesterday,” and to events occurring long before the Faux Soir caper with “3 Years Before Faux Soir.” Ramzipoor’s control over the manipulation of time-sensitive information is splendid, and the results are magnetic.

The main narrative, energetic enough, is further enlivened by unexpected subsidiary areas of interest. Perhaps the most thought-provoking and emotionally fraught subplot has to do with the relationship between Lada and a female judge. The thread involving these lesbian lovers and the circumstances that test their various loyalties could launch a fascinating sequel.

In today’s world of propaganda wars, fake news, and alleged fake news, The Ventriloquists holds up a dazzling looking glass for those intent on silencing others and for those who will not be silenced.