The hunt for immoral yet lucrative cargo during the Revolutionary War. 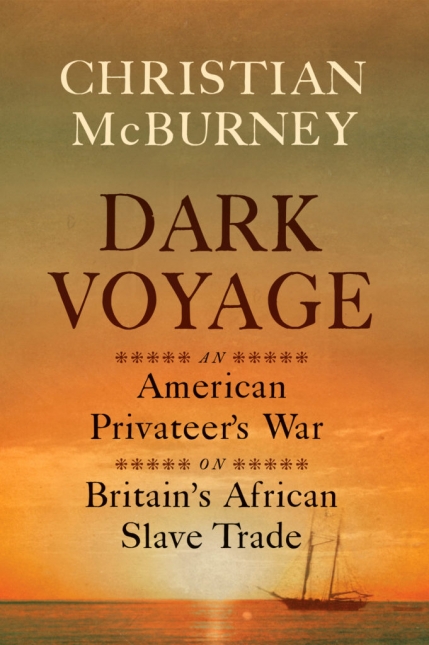 Dark Voyage tells the story of the Marlborough, a 250-ton American privateer from Rhode Island that sailed across the Atlantic Ocean in 1778 to capture British slave traders operating off the African coast. Driven by a desire for money, those events produced outcomes that were varied in their short- and long-term consequences. Recounting the saga, writes author Christian McBurney, “brings the glory of the American Revolutionary War and [the] horror of the African slave trade together in one tale.”

Readers will find the Marlborough’s tale to be fascinating. Its remarkable ebbs and flows also allow McBurney to illuminate “the stunning impact American privateers had on the British slave trade during the Revolutionary War.”

The star of the account is the Marlborough herself, a “sleek, twenty-gun, double-decker brig,” designed for fast sailing and hard fighting. She was a privateer, “a private, armed ship with government authority to attack and capture enemy shipping,” the author explains. Once an enemy ship was captured, a privateer’s owners, officers, and crew shared in the profits gained when the vessel and its cargo were sold. The primary goal behind the Marlborough’s daunting voyage of some 3,800 miles to Africa was to capture British slave-trading ships, claim their cargo of enslaved Africans, and sell everything off.

There are several larger-than-life characters behind the Marlborough’s voyage. One is John Brown, a wealthy and prominent merchant from Providence, Rhode Island, and the ship’s primary owner. His notion to privateer in West African coastal waters in search of British slave ships “was an exceptional idea,” says McBurney; no other American privateer is known to have done so. Another central character is George Waite Babcock, of Exeter, Rhode Island, the Marlborough’s captain. “One of the outstanding American privateer captains of the war,” writes McBurney, who aims for him to become more widely known.

McBurney chronicles the Marlborough’s journey with meticulous detail. Much of it is gleaned from “The Journal of the Good Ship Marlborough,” a surviving log kept by 20-year-old captain’s clerk John Lissom Boss of Newport. But many other sources are tapped to flesh out the crew’s adventures on the action-packed voyage.

Their deeds included destroying a key British slave-trading post at Isle de Kassa, “the outstanding act of the Marlborough’s voyage to Africa.” We learn of the Marlborough’s capture of the ships Fancy, Pearl, Kitty, and Betsy, and its seizing of the 341 Africans held on or below their decks. We also read of the fates of some of those captured souls, insofar as their stories can be recreated from known facts. McBurney confesses that, for many, “only a few snippets of information are available.”

This, McBurney’s sixth book on the American Revolution, is a wide-ranging account that sets its microhistory case study in wider historical contexts. The story is told effectively, and the writing is accessible, with helpful explanations of terms and events for the uninitiated. The author’s account is underpinned by significant research in archives and other primary sources — such as period newspapers — and incorporates much relevant historiography. There are also several useful maps and a gallery of black-and-white illustrations, among them Edward Greene Malbone’s portrait of John Brown.

Dark Voyage boasts four appendices which include, among other information, a list of the Marlborough’s crew; descriptions of 26 British slave ships caught by American privateers from 1776-1778 but found to have no enslaved people aboard; and an account of 41 other British slave ships that did hold human cargo. The final appendix tallies, by year, the number of African captives transported by British and U.S. slavers to the Caribbean from 1752 to 1792; the total exceeds 1.15 million.

McBurney is cognizant of the limitations of the surviving historical record. When telling his story requires him to speculate, he does so via reasonable conjecture. Some will find the prose occasionally labored and the overuse of phrases like “as previously mentioned” unduly repetitive. There are other unnecessary repetitions elsewhere. We are told on page 202, for instance, that “abolitionist Thomas Clarkson published the first history of the slave trade.” Do we need to be told two pages later that he was “the first historian of the slave trade”? We are also reminded at least a dozen times that the Marlborough carried 20 guns.

Following in the steps of W.E.B. DuBois and others, McBurney maintains that “the American Revolution was a crucial catalyst for the worldwide antislavery movement.” It “proved to be a major leap forward for the cause of ending the African slave trade, as well as slavery itself.” The role of privateering in curtailing slavery he presents as somewhat more ambiguous.

One “unintended consequence” of the practice was that, in the wake of the threat posed by American privateers, British stakeholders “invested in many fewer African slave trading voyages,” with the result that “tens of thousands of Africans” (“perhaps more than 60,000”) were spared “being involuntarily forced onto slave ships to endure the horrors of the Middle Passage and spending the remainder of their lives enslaved in North America.”

Mark G. Spencer is professor of history at Brock University. Along with the Independent, he reviews for the Times Literary Supplement, the Wall Street Journal, and the Washington Post, among other publications.