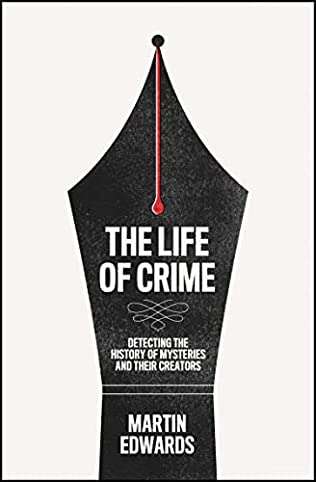 This massive chronicle of crime fiction comes as close to being exhaustive as author Martin Edwards’ near-manic expertise and reading experience allow. In it, he covers hundreds of writers in 55 chapters organized topically (e.g., “The Mistress of Deception: Agatha Christie”; “Waking Nightmares: Noir Fiction”; and “In Lonely Rooms: Raymond Chandler”). Each concludes with a hefty block of fine-print notes that sweep up loose ends. And the whole package is capped with three indices (title, name, and subject) and 20 pages of “select” bibliography perfect for selective dipping and further reading.

Could the devout mystery fan wish for anything more? Well, perhaps…especially if she or he is seeking critical depth or insight into stylistic crosscurrents. The Life of Crime, which — face it — is essentially a biographical survey, has singular virtues and pesky drawbacks alike; ironically, they often coincide. The book powers forward like a human-wave assault, covering all the big names, but then draws the reader into a swarm of lesser lights, including the vaguely familiar and the near obscure.

No blame from this quarter, as that’s what Edwards clearly intended. But remember: You won’t find much substantive detail here, even among the biggies. If you want to dig deeper, you’ll have to follow the clues in Edwards’ excellent chapter endnotes and bibliography.

That said, The Life of Crime offers many compensating delights, and it amply satisfies the modern appetite for chatty anecdote and casual factoid. Each chapter kicks off with a compelling vignette or two, for instance:

Another instructive take-away from the book: The larger share of the creation, promotion, and audience appeal of suspense writing belongs to women authors. “Men dominated British crime fiction for the first three decades of the twentieth century,” writes Edwards. “From then on Christie, [Dorothy L.] Sayers, [Margery] Allingham and [Ngaio] Marsh took center stage. Even the most gifted male contemporaries…never quite matched their sales and reputations.”

Yet there are blind spots, too, despite the broad scope of Edwards’ historical rundown. One particularly glaring lapse: There’s not a single word about Elmore Leonard! And James Lee Burke receives only passing mention. Irish writers notably fail to make much of an impression on our British host, either. Tana French, Benjamin Black (John Banville), and the emerging crop of Ulster crime writers garner scant, if any, coverage.

This latter lapse is regrettable and perhaps a little annoying, but it’s not a thrill-killer. Yes, we all have our favorites, and their omission from Edwards’ roll call rankles a bit. Even so, The Life of Crime — whether you read it through or shelve it for moments of curious interest — is worth investigating if you love crime fiction.

Bob Duffy is a Maryland author and retired advertising executive.