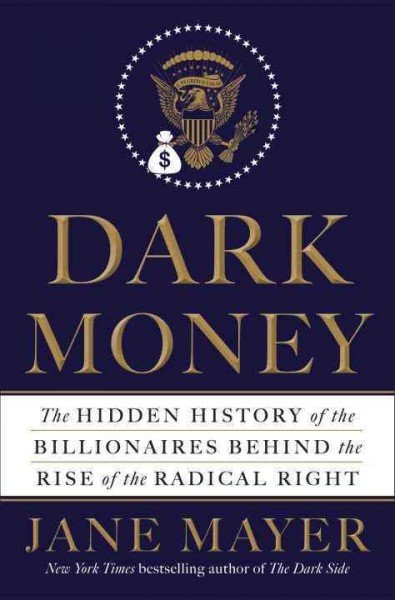 It is no secret that our politics are awash in money. Political Action Committees (PACs) have provided hundreds of millions of dollars to even the weakest candidates in the primaries (think: Bush, Rubio). We can be assured that the numbers for the main show in November will be even larger. Bad as that may be, PACs are only the tip of the iceberg.

Huge political donations are often made below the radar. Extremely wealthy donors have been organized to promote their political agenda, much of which is self-serving. Their objectives and the secretive nature of the radically conservative “dark money” movement are the subject of Jane Mayer’s book.

Although a similar case can be made against both sides of our political spectrum, in Dark Money: The Hidden History of the Billionaires Behind the Rise of the Radical Right, Mayer focuses on the influence of the so called “radical right.” The main topic is the Koch brothers and their solicitation of the wealthiest in the country to control the nation’s political agenda. This moneyed force has been organized by Charles and David Koch to promote and implement the teachings of their heroes Friedrich Hayek, Adam Smith, the John Birch Society, Ayn Rand, and radical libertarianism: a revival of “Laissez-nous faire.”

In 2010, the author, an investigative reporter and staff writer for the New Yorker, wrote a 10,000-word piece about the Koch brothers. Despite attacks by the brothers, she forged ahead with her book and was able to research and interview many of the persons directly or indirectly involved in the support of the Koch movement. This book is the result of her five-year quest.

The story starts with the history of the Koch family and the creation of their great wealth. The father, Fred Koch, was a brilliant MIT grad who was very successful in the oil-refining business. Much of his success and initial fortune in the 1930s was attributed to his huge contract with Joseph Stalin’s Soviet Union and Adolph Hitler’s Nazis.

Appalled by what he saw in those totalitarian societies, he became a strident anti-communist and a founding member of the John Birch Society. His four sons, Charles, Frederick, David, and Bill, adopted his competitive nature and his conservatism. Despite fine educations and great wealth, dissension in the family resulted in vicious lawsuits. The apparent winners were Charles and David. As the family alpha, Charles became the principal steersman of their businesses and the promoter of their ultra-conservative beliefs.

Charles and David entered politics as John Birchers but later became avid libertarians. David even ran for vice president on the 1980 Libertarian platform. Over the next 30 years, they donated over $100 million to organizations advocating for less government. They enjoyed great success in the 2010 and 2014 mid-term elections when Republicans gained in the House and Senate and made additional gains in state legislatures and governorships.

In the 2000s, Charles began inviting many of the country’s wealthiest conservative families to support the cause. With invitations to exclusive venues, the attendees were lavishly entertained with speeches by leading anti-government conservatives. In addition to the billionaires attending these seminars were politicians and other influential dignitaries, including federal and state justices and judges.

By exploiting the group’s disdain for tax laws, the seminars urge the use of charitable tax deductible donations to support foundations and 501(c)(3) and 501(c)(4) entities that will promote their self-interest. The 2010 decision in Citizens United to permit unlimited contributions created a donor frenzy.

All of these vehicles were able to promote their politics while concealing the identities of the donors. The funds were intended to be used for the elimination of government agencies and programs that interfered with their businesses and personal wealth such as the IRS, EPA, U.S. Food and Drug Administration, U.S. Securities and Exchange Commission, Federal Election Commission, Occupational Safety and Health Administration, and the Clean Air and Clean Water acts.

The amount of “dark money” being collected and spent is astonishing. Much of it goes to think tanks such as the American Enterprise Institute, Cato Institute, Competitive Enterprise Institute, Heritage Foundation, and Media Research Center. These entities actively attack the concept of global warming and industrial and workplace safety regulations, and eschew the expensive clean-up costs of industrial contamination. Large amounts of money from the Koch brothers were directed to creating the Tea Party.

Even more invidious has been the effort to influence universities. Large donations are being made to schools that hire professors vetted and approved by the donors. The grants go to a variety of colleges with emphasis on the most prestigious and influential universities such as the University of Chicago; Stanford University; University of Virginia; the eight Ivy League schools; and our Fairfax, Virginia, neighbor, George Mason University.

George Mason promotes and administers the Mercatus Center, described on its website as “an American non-profit free-market-oriented research, education, and outreach think tank.” The Koch family spent $30 million to induce the Mercatus Center to move from Rutgers University to George Mason. Koch Industries and ExxonMobil are two of the largest donors for the Mercatus Center, which propagates the benefits of an unencumbered free market.

Conservative think tanks are multiplying both on and off campuses across the country. Their research frequently attacks global warming as shaky science, women’s and gay rights, abortion, and “Obamacare.” They oppose social and civil rights programs and most anything that obstructs their system of unregulated capitalism.

Historically, the use of “dark money” to influence politics is nothing new. Politics in the United States has always been one of our biggest businesses. However, Mayer is outraged by the concealment of the donors, the huge amounts involved, and the way they conceal “gifts” behind high-minded principles.

Mayer is one of the nation’s best investigative journalists, and she is writing in the muckraking tradition of Ida Tarbell. Readers who believe that money and politics make for a toxic brew will share Mayer’s anger, which animates every page of Dark Money.

Paul D. Pearlstein is an attorney in Washington, DC, and a former Reserve captain in the Army Signal Corps. He and his wife live two blocks from Politics and Prose and both love to read. Paul is also a musician who performs regularly with the Takoma Mandoleers, and a docent at the National Museum of American History. He gives tours there on Fridays and can talk for at least 30 minutes about Chester Arthur's girlfriend(s) and/or Franklin Pierce’s alcoholism.

This Town: Two Parties and a Funeral — Plus, Plenty of Valet Parking! — in America’s Gilded Capital

The journalist delivers a clever blend of juicy dish and smart sociology in describing the most powerful city on earth.