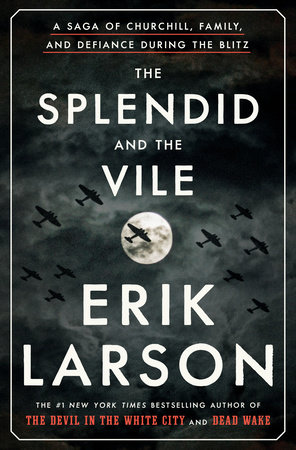 The creeping sense of dread that enveloped me while reading Erik Larson’s brilliant In the Garden of Beasts was so remarkable that it invaded my dreams. His look at the early-1930s  Nazis’ inexorable march toward Hitler’s Final Solution disrupted my sleep and provoked such a frantic rush of emotion that I didn’t know quite what to do with myself in its aftermath.

It was a book I gave — and continue to give — to friends fascinated by, or compelled to learn more about, the apocalypse that was World War II, by far my favorite historical period to explore.

So it was with much anticipation that I approached Larson’s The Splendid and the Vile, an account of the Blitz, the Battle of Britain, and Winston Churchill’s deft navigation of both. Spanning the first year of Churchill’s reign as prime minister, the 1940-1941 chronicle is rich with eyewitness commentary and intriguing details about what average people and their leaders endured during those initial dark days of the war.

What it’s lacking, alas, is drama.

This sounds absurd given the months being covered; there was no end to the real-life terror and upheaval experienced by millions during that time. But the gift of retrospect — and the knowledge of how certain events ultimately played out — can undermine a narrative’s urgency, and that’s what too often happens here.

Because we know Germany never invaded England, for instance, reading over and over again about the potential for such an assault (a so-called “reverse Dunkirk”) grows tiresome. And since a reluctant United States was finally dragged into the war after Pearl Harbor (despite “America first” isolationists’ howls of protest), being taken through every one of Churchill’s prior failed overtures to FDR is more enervating than edifying.

Why does any of this matter? Isn’t a nonfiction author straitjacketed by the facts and duty-bound to report them? Yes and no. Larson is a solid researcher, but he has a knack for choosing topics that allow him to unearth little-known, parallel narratives that illuminate the larger events they’re set against. Crafting factual page-turners is his signature, and it’s something his fans look for and mostly find.

When Larson captures the minute-by-minute maneuvers of a nervy U-boat captain trailing the doomed Lusitania, it makes Dead Wake read like a novel. And when he shows us, through the eyes of a baffled meteorologist, the horror of a behemoth hurricane swallowing Galveston, we weather Isaac’s Storm alongside those drowned by it.

But when, in The Splendid and the Vile, there aren’t any surprising new revelations? When no obscure secondary figure emerges who merits a book’s worth of attention? Then the author, if he’s intent on mirroring his usual style, must try to generate interest where otherwise there is none, even if it means flooding the zone with minutiae.

Hence, several minor figures — including Churchill’s daughter Mary and his 25-year-old private secretary, John Colville — are given an outsized amount of airtime, to limited effect. Mary seems especially ill-suited to such prominence. Though smart and charming, she’s a teenager, and her copious reflections on friends, dances, handsome RAF pilots, and pedestrian travails quickly become irritating.

Other characters, from Churchill’s ne’er-do-well son, Randolph, and Randolph’s long-suffering wife, Pamela, to Britain’s minister of aircraft production Lord Beaverbrook (who, in an amusing ongoing thread, repeatedly tries, and fails, to resign) and scientific advisor Frederick “the Prof” Lindemann, don’t fare much better. Granted, they’re playing against the larger-than-life Winston Churchill, but it was the author’s decision to put them center stage.

And it’s the reader’s decision whether to hang in there for all 500-plus pages. If you do, you won’t be gripped by a pulse-pounding story, but you will earn smaller rewards: glimpses of daily life at 10 Downing Street and Buckingham Palace; reminders of Churchill’s penchant for bathtub work sessions and gaudy dressing gowns; notes from Joseph Goebbels lamenting his own fatigue; recollections of Göring’s fondness for outlandish costumes, makeup, and nail polish; and the words of average Brits bearing up under unfathomable duress.

The last of these — which Larson wisely mined from contemporaneous diaries — best capture the nightmare of the Blitz and give the book its most memorable jolts of color, such as this depiction of a London streetscape following a bombing:

“Dr. Ashworth reported seeing a dog running along the street ‘with a child’s arm in its mouth.’ A man named E.A. Cox saw a man’s headless body beside a bomb crater…Bodies arrived at a makeshift morgue at a rate of up to sixty per hour…Between 40 and 50 percent were classified as ‘unidentifiable owing to mutilation.’”

The wanton destruction, along with the mandatory black-outs, rationing, and threats of poison-gas attacks, created in many Londoners a “Well, we’re probably going to die anyway” ethos that all but guaranteed strange bedfellows in air-raid shelters.

Diarist Joan Wyndham finally gave in after long guarding her virginity against her boyfriend’s entreaties to take one for the team, concluding, “As the opposite of death is life, I think I shall get seduced by Rupert tomorrow.” The next afternoon:

“Rupert slipped off his clothes, and I suddenly realized he looked terribly funny in the nude and began laughing helplessly’…Later, she reflected, ‘Well, that’s done, and I’m glad it’s over! If that’s really all there is to it I’d rather have a good smoke or go to the pictures.’”

(At this, the global sisterhood echoes, “Amen!”)

It’s delectable particulars like these that make The Splendid and the Vile a worthwhile read, if not a riveting one. For students of Churchill and the Blitz, the sheer number of snippets from journals, memos, official documents, and private letters will seem impressively exhaustive. For more casual readers, though, it may just feel exhausting.

[Click here to purchase The Splendid and the Vile from indie-supporting Bookshop.]

Holly Smith is editor-in-chief of the Independent. She’s always looking for her next WWII-related read.