A couple flees home in a futuristic world where refugees are the new normal. 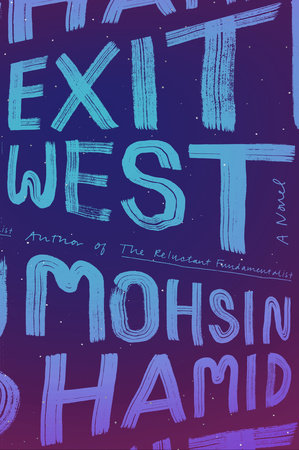 There are over 7 billion people and counting on this planet, a healthy percentage of whom live in nations that are failed or are on the verge of failing. When one’s country begins to implode, what does one do? As crowded refugee camps in Jordan, Turkey, Lebanon, Pakistan, Kenya, and elsewhere attest, those who can, flee for their lives.

According to a 2015 UN Refugee Agency report, “65.3 million individuals were forcibly displaced worldwide as a result of persecution, conflict, generalized violence, or human rights violations.”

In his fourth novel, Exit West, Mohsin Hamid tells the story of two of those individuals, Saeed and Nadia, who live in an unnamed Muslim country. Though their city is besieged by refugees, it is “still mostly at peace, or at least not yet openly at war.”

Young professionals, Saeed and Nadia meet at a night class on corporate identity and product branding. As their courtship progresses, their city plunges into chaos. Bombs explode, gunfire rattles, refugees pour in, utilities disappear. Nevertheless, they continue to live “normal” lives, going to work, meeting for dates, sharing a joint while listening to records in Nadia’s apartment which Saeed sneaks into by donning a woman’s black robe.

Folded into each chapter detailing the protagonists’ daily life is a passage that takes place elsewhere: Sydney, Tokyo, San Diego, etc. In all these locations, there is a doorway, “dark, darker than night, a rectangle of complete darkness — the heart of darkness.” Through that door come people, interlopers, who slip away into the new world.

Meanwhile, Saeed and Nadia’s city “resembled an old quilt, with patches of government land and patches of militant land. The frayed seams between the patches were the most deadly spaces, and to be avoided at all costs.”

Saeed’s mother falls victim to “a stray heavy-caliber round passing through the windshield of her car and taking with it a quarter of Saeed’s mother’s head.” Foreign militants pour into the city, and soon there are “bodies hanging from streetlamps and billboards like a form of festive seasonal decoration.” As the barbarity builds, Saeed and Nadia realize they must seek out one of those dark portals.

Their escape is addressed in a single, short paragraph. One moment, they step through the door, and a mere eight lines later, they emerge. That dangerous, arduous journey during which so many meet their end (at least 10,000 are projected to have died in 2016) is not significant to this novel.

It is after Saeed and Nadia escape to the developed world that we understand that, rather than set in the present, Exit West is a near-future novel. (Maybe the dark doors are teleporter portals, like in “Star Trek”? But no, this is not science fiction.)

After a stop in Mykonos, our brave couple goes through another portal to land in London, where they squat in a luxury building full of people like them. In fact, London is so overrun by migrants that “legal residents were in a minority, and native-born ones vanishingly few.”

Those native born begin to feel unmoored, and some become migrants themselves, like the accountant who flees London and ends up in Namibia. The title is a double entendre: Refugees are exiting for the West — exit, stage left — and the West as an idea and an ideal is disappearing (exit the West).

Unable to fight the ceaseless tide of humanity, construction begins on the London Halo, a ring city built “to accommodate more people again than London itself.” Saeed and Nadia decide once again to “pass through a nearby door she had heard of, to the new city of Marin, on the Pacific Ocean, close to San Francisco.” There, they build the lives that normal people hope to build, exploring their identities, actualizing their potential, letting go of the past to embrace the future.

Readers of Hamid’s novels know to expect a certain distance between the reader and the narrator. How to Get Filthy Rich in Rising Asia is told in the second person, which is really a cloaked first-person narration. Even with a first-person confessional like The Reluctant Fundamentalist, the reader eventually surmises that there is no removing the narrator’s mask; his mask is his face. The Other must always protect himself by sheathing his vulnerable core in impenetrable shadow.

Hamid takes this remove one step further in Exit West, which reads almost like a sociological report, Saeed and Nadia lab specimens whose past and futures are entirely known. The omniscient narrator reveals outcomes that have not yet happened, like the manner in which someone will die or an estrangement that will never be healed. It is as if God itself were the narrator, and Saeed and Nadia prototype figures like Adam and Eve.

By removing the melodrama inherent in a refugee’s plight and replacing it with quotidian incidents picked out in vivid, evocative and highly astute prose, Hamid elevates this tale from a self-pitying weeper or a heart-wrenching invective into a sympathetic, beautifully wrought story of two people propelled by events outside of their control who seize their own destinies. While offering a dim view of the future, it also comforts with a portrait of humanity’s resilience.