Busted: A Tale of Corruption and Betrayal in the City of Brotherly Love 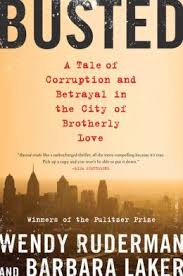 Many reading this review of Busted: A Tale of Corruption and Betrayal in the City of Brotherly Love may have little or no personal knowledge of our drug-ravaged inner cities. Binge-watching HBO’s “The Wire” doesn’t count. And corrupt cops? That, too, is a phenomenon that many of us keep at a safe arm’s-length distance. Somebody else’s problem. And it must be rare, right?

Wendy Ruderman and Barbara Laker, the gutsy authors of this real-life thriller, won a 2010 Pulitzer Prize for Investigative Reporting at the Philadelphia Daily News. In dynamic, concise prose and vivid detail they recount in Busted how they earned that most prestigious award in journalism by exposing the seamy and systematic connection between drug dealing and corrupt cops in the City of Brotherly Love. It was the biggest police corruption scandal in Philadelphia’s history and led to an FBI probe, as well as the review of hundreds of criminal cases.

The book kicks off in 2008 when a pudgy drug dealer and police informant, Benny Martinez, comes to the Daily News offices to tell his story to Ruderman. He’s terrified for his life and out of options for recourse through regular police channels, such as they are. As an informant, he’s been paid since 2001 for leading narcotics squad cops to known drug dens. Martinez does the drug buy, with the cops watching and waiting to bust the dealers. Martinez gets extra compensation if guns are found. His cop partner, Jeff Cujdik, nearly doubles his own salary in court overtime because, thanks to Martinez, he’s hauling in so many dealers – 200 in seven years. Cujdik is hailed as one of the department’s “golden boys” who “made his bosses look good,” Ruderman and Laker write.

But now the dealers have finally figured out that Martinez is a snitch. Furthermore, he and Cujdik have refined their operation to form an unholy and lucrative alliance based on “lies.” The set-up: If Martinez can’t “score drugs from a house,” Cujdik tells him to buy drugs elsewhere – anywhere to get fake “evidence.” Cujdik then fills out an application for a search warrant, saying the drugs came from the targeted house. The supposed dealers are often friends and even family of Martinez, hence the “betrayal” in the book’s subtitle. They may once have dealt drugs, which makes them plausible targets. When they’re busted, Martinez gets paid by the police and Cujdik gets all his extra benefits. He even rents a house for Martinez, a clear violation of police ethics, not least because the rent money flows right back to Cujdik. When this cozy arrangement is revealed in a court case, at about the same time that the street figures out that Martinez is a rat, the informant fears that Cujdik wants his partner “out of his life” to wipe out the one person who can connect all the dirty dots.

Ruderman – 39 years old, a mother, barely 5 feet tall, tenacious – and Laker − 50, divorced, a runner, blonde, so pretty she “came off all bubble gum,” a clever façade − have journalism in their blood, as Ruderman says. With their big city newspaper teetering on the edge of bankruptcy, they go to work on this irresistible story like a couple of old-fashioned bloodhounds. So hungry for verifiable facts that they ignore danger, the pair spends many nights pounding Philadelphia’s most menacing streets (Laker in her signature high heels) to find witnesses. They comb through boxes of search warrants to separate the real from the phony and back it up with a paper trail.

What they’re looking for gets worse and much bigger. As their series of “Tainted Justice” exposé articles starts appearing in the Daily News, shocking the city and infuriating the police, the reporters discover that corrupt cops are also storming immigrant-owned bodegas on the pretext of a drug bust, cutting the surveillance camera cords, and then looting the stores for money and petty goods that they later distribute to friends. One cop − “the Boob Man” − fondles and sometimes assaults large-breasted women who happen to be on the scene.

Lives and livelihoods are ruined by these predatory escapades. “I believed in the American dream,” says Emilio Vargas, a Dominican victim of one of the police raids. “I still do. I believed that if you worked hard, you get ahead. But, everything changed after this.”

Busted is told through Ruderman’s first-person voice, no doubt to keep the narrative taut and straightforward. She and Laker wisely let the gripping story build itself, fact by fact, witness by witness. The authors’ passion for the truth and anger at the damage done to innocent people seep out around the edges of the story, no less effective for being restrained. Inspired since childhood by Bob Woodward and Carl Bernstein’s uncovering of Watergate, they want to see themselves as being in that tradition of great, tough big-city journalism.

The narrative drive is leavened by the contrasting personalities of the two reporters. There’s a whiff of Erin Brockovich. Just enough detail about their personal lives is revealed to bring the women as alive on the page as any of the more obviously colorful characters they’re writing about. Ruderman goes into perhaps more detail than necessary about her laissez-faire parenting style (“If the kids wanted Popsicles for breakfast, fine.”) and her marriage; she is generous to her soon-to-be ex-husband. Laker, writes Ruderman, “was a sweetheart who, unlike me, never dropped the f-bomb or got crass about her sex life.”

What they have in common is what drives Busted. Both love print newspapers even as they know the crusty, hard-boiled old media form is going down in the Internet deluge. But it’s not dead yet, as this book amply proves.

Kate Buford’s award-winning Native American Son: The Life and Sporting Legend of Jim Thorpe (Knopf; U. of Nebraska Press) was a 2010 Editors’ Choice of The New York Times. Burt Lancaster: An American Life (Knopf/Da Capo/Aurum UK) was named one of the best books of 2000 by the New York Times, the Washington Post and others, and was a Los Angeles Times bestseller. Buford has written for the New York Times, Film Comment, Bluegrass Unlimited, and the Daily Beast, among other publications, and was a commentator on NPR’s Morning Edition and APM’s Marketplace from 1995-2004.