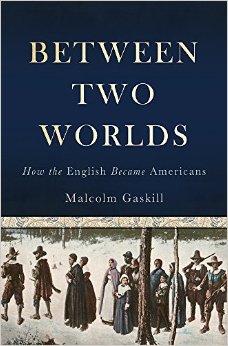 As an elementary school student growing up in Massachusetts, I was taught that a group calling themselves the Pilgrims, fleeing religious persecution in England, landed on Plymouth Rock in 1620 and — with the help of empathetic Indians — built a home in the wilderness.

It was the only introduction I was to be given into the vastly complex process by which the British Empire claimed, settled, and exploited America and points south, from Newfoundland to New England, the Mid-Atlantic Region, the southern colonies, and the islands of the Caribbean.

Dissecting and distilling the English settlement of the New World into a comprehensive, readable, and palatable history is indeed a daunting challenge, but it is one that Malcolm Gaskill, author of Between Two Worlds: How the English Became Americans, has met and more than overcome.

From the very beginning, Gaskill makes it clear that there was no specific “type” of English settler in the early 17th century. The lure of the New World drew a motley collection of businessmen, soldiers, explorers, laborers, and planters, with more than a smattering of ne’er-do-wells.

It attracted poor folk who indentured themselves with no concept of the fresh hell that awaited them. And it included a handful of men who — after a night in the tavern — found themselves inexplicably shipped aboard a vessel bound for a distant, savage land.

As Gaskill points out, “Some were coerced, including reprieved felons, prisoners of war, kidnapped children, and adolescents put into service.” The very first page of his extensive work includes the deceptively simple statement, “There was no single America.”

Gaskill is an Englishman writing about the settlement of America, but he focuses equally on those who remained in England and sought to make their fortunes by investing in the promise of the uncharted land across the sea. They were, he writes, “adventurers” in their own right, and while some prospered, many others were ruined.

Occasionally, these generally stay-at-home entrepreneurs ventured forth to take their place among the settlers. One such figure was Edward Maria Wingfield, a man of impeccable political connections and a member of the Virginia Company who — after handpicking his colonists — accompanied them to the New World as governor of their prospective colony.

He chose the site of Jamestown — a marshy, mosquito-ridden patch of ground fronting a brackish river, on which sewage returned with the incoming tide. With no fresh springs from which to draw, the settlers were forced to drink the river water, “which was at floud verie salt, at low tide full of slime and filth.”

And then there were the Indians, who answered the Englishmen’s arrogance and superior attitude with knives, hatchets, and volleys of arrows. To fully appreciate the horror of an Indian attack, the author wisely lets a survivor describe the bloody outbreak of Virginia’s Tidewater War: “‘Not being content with taking away life alone,’ wrote Edward Waterhouse, the Virginia Company secretary, ‘they fell againe upon the dead, making as well a fresh murder, defacing, dragging and mangling the dead carcasses into many pieces.’”

Gaskill is skilled at placing the reader in the moment to share the fears and violence, as well as the smells, tastes, merciless heat, and brutal cold of thousands of miles of dense wilderness from which these naïve, often shell-shocked empire-builders chopped out an existence and established a part of England in America.

Beyond simply chronicling the varied enterprises by which Englishmen gained a foothold in the New World, Gaskill successfully argues that the very self-reliance upon which their survival depended would grow, over the course of nearly two centuries, into a fierce sense of independence that would ultimately win freedom for their descendants.

And in the process, he illustrates how, from the very first tenuous venture onto the exotic, deadly land of promise, their identities as Englishmen would subtly begin to transmogrify into something altogether new. Even without their own awareness, they would start to become Americans.

Between Two Worlds is a scholarly work that has the added benefit of being extremely well written — a combination that is always welcome in the realm of historical literature. Although Gaskill writes to support his premise, he never loses sight of the fact that he is telling a story, albeit a highly complex one. Ultimately, he conveys a respect for these flawed, often greedy, sometimes murderous, and generally self-serving interlopers.

“What does survive of Williams and Winthrop and thousands of other migrants,” he writes, “and which must never be ignored or denigrated, is their extraordinary courage. This, above all else, resounds across the centuries and should inspire us. The best way to remember the Pilgrim Fathers, it has been said, is to look at Plymouth Rock, then turn around to gaze at the vastness of the ocean whence they came.”

A writer and speaker by profession, Ron Soodalter has authored two books on American history, as well as nearly 200 articles for such publications as Smithsonian, the New York Times, American History, Civil War Times, and America’s Civil War. His article on the 1622 Tidewater Wars of Virginia appeared recently in Military History Quarterly.

Kingdom of Nauvoo: The Rise and Fall of a Religious Empire on the American Frontier