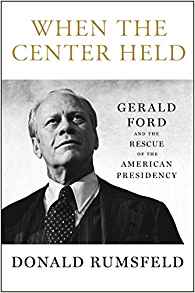 Gerald Ford served as president for three-and-a-half months less than John F. Kennedy, yet the differences in their White House experiences, not to mention history’s appreciation of their performance, are vast.

Ford took office and put a staff together abruptly after Richard Nixon’s constitutional-crisis resignation, while Kennedy entered the Oval Office with his carefully selected “best and brightest” team. JFK then took over following Dwight Eisenhower’s extended run of peace and prosperity.

Ford’s most controversial act — pardoning Nixon — is now regarded by one-time critics like the Kennedy family and Bob Woodward as the best possible decision at the time to move the country past Watergate; Kennedy’s most controversial decision — the invasion of the Bay of Pigs in Cuba — will forever be regarded as a colossal blunder.

In spite of these facts, C-SPAN’s most recent presidential ranking poll in 2017, where all voters are historians, puts JFK eighth and Ford 25th.

Donald Rumsfeld served first as White House chief of staff and then secretary of defense during Ford’s presidency and was his close friend for over 40 years. In his new book, When the Center Held: Gerald Ford and the Rescue of the American Presidency, Rumsfeld aims to elevate Ford’s current middle-of-the-pack standing.

Given President Ford’s removal of recording devices from the White House upon taking office, and the fact that he did not keep a diary, the best daily account of what happened during his presidency may well be the hundreds of action memos prepared by Rumsfeld after every meeting with the commander-in-chief. Those memos frame each chapter of the book.

Because of their friendship, Rumsfeld makes clear from the outset that his view of Ford is not impartial, and his book is not intended to be an objective biography. Rather, it is his attempt to “give a sense of what it was like to be there, during one of our nation’s most tempestuous times, at Gerald Ford’s side.”

Despite that caveat, the book is a fine work of presidential history, as evidenced by the dust-jacket endorsements from Pulitzer winner Jon Meacham and Pulitzer finalist Jean Edward Smith.

How good was Gerald Ford during his brief presidency? His being underrated among his White House peers is certainly in conflict with the assessment of former Speaker of the House Tip O’Neill, who compared Ford’s performance to Abraham Lincoln’s during the Civil War — to the effect that he was “ordained by God to be the right man at the right time who was able to put our nation back together again.”

President Ford, by all accounts (not just Rumsfeld’s), was a man of integrity and a chief executive whose moral compass was always focused on the true-north standard of putting the country first over his own self-interest. He came to the Oval Office limited by the facts that he was the only man to enter the White House without having run on a national ticket, and that the presidency was his first executive position in government.

As Rumsfeld persuasively demonstrates, despite these deficiencies, Ford did an outstanding job in bringing both Watergate and Vietnam to an end, and also in turning around the nation’s economy by working successfully with Congress on legislation that reduced inflation and unemployment.

In spite of those achievements, Ronald Reagan ran against him in the 1976 primaries, creating the biggest split in the Republican Party since Theodore Roosevelt’s 1912 challenge to incumbent president William Howard Taft.

Rumsfeld accepts the fact that, from a historical standpoint, regardless of his friend’s stellar performance, solid but unspectacular Gerald Ford will forever stand in the shadows of eloquent, charismatic dynamos John F. Kennedy and Ronald Reagan.

Nonetheless, he makes the case for elevating Ford’s stature by comparing him as a college football player to him as the president, and then bridging that comparison with a classic poem from William Butler Yeats. It sounds contorted, but blending the metaphor with the poem works well to achieve Rumsfeld’s objective, and that blend produced the book’s title.

For three seasons at the University of Michigan, Ford played center, the game’s most unglamorous position, and in that role, took his fair share of hits. Though never scoring a point, his teammates recognized his leadership by electing him captain. After his final game as a Wolverine, his high level of play caused him to be chosen for college all-star games and attracted offers from the Detroit Lions and Green Bay Packers.

Despite his athletic prowess, Ford decided to attend Yale Law School and hung up his leather helmet without pursuing a pro career. After graduating, he practiced law in Grand Rapids, Michigan, until embarking on a long and distinguished political career that ultimately led to the White House.

Fast forward a few decades: During a meeting between President Ford and Leonid Brezhnev in November 1974, the Soviet leader mentioned that, in his youth, he had played soccer with some success, playing the wing position, where foot speed is a prerequisite. This led Ford to speak of his athletic days on the gridiron, telling Brezhnev, “I wasn’t very fast, but I could hold the line.”

Rumsfeld ties Ford’s statement of his primary talent as a football player with a poem written in 1919 by Yeats entitled “The Second Coming.” Yeats described the chaos in Ireland after World War I as a time when:

Things fall apart; the center cannot hold;
Mere anarchy is loosed upon the world,
The blood-dimmed tide is loosed, and everywhere
The ceremony of innocence is drowned.

That description of a different place and time matched the condition of the United States in the final days of Nixon’s presidency, with one key difference. When Nixon turned over the country’s reins to Ford, it was a time when things did not fall apart, and anarchy was not loosed, because what President Ford did for the federal government from August 1974-January 1977 duplicated what he’d done on the football field 40 years before: The center held.

Rumsfeld’s book should inspire historians to look beyond charisma and eloquence in ranking presidents and reevaluate their assessment of his late friend’s presidency. After all, during his 895 days at the nation’s helm, Gerald Ford succeeded in bringing stability and trust back to the Oval Office at a time when our country needed it most.

Talmage Boston is a lawyer and historian in Dallas, Texas. His latest book is Cross-Examining History: A Lawyer Gets Answers From the Experts About Our Presidents (Bright Sky Press 2016).