Because I Come from a Crazy Family: The Making of a Psychiatrist

An eminent physician uses his painful upbringing to heal others. 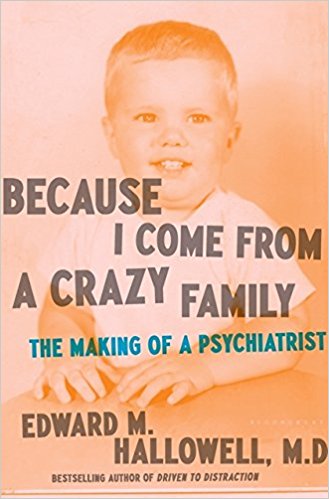 Do you have to come from a crazy family to become a psychiatrist? I don’t think so, but according to Edward Hallowell’s account of his early life, his family, and his journey into psychiatry, it may very well help.

There are two books in this wonderfully rendered memoir: The first is about Hallowell’s growing up and traumatic early life (harrowing), and the second is about his growth as a psychiatrist (inspirational).

Edward (Ned) Hallowell comes from Massachusetts bluebloods and was raised on the Cape until, at age 7, when he was dislocated to Charleston, SC, after his mother’s remarriage. His father was an All-American hockey player at Harvard, a Goldman Sachs executive, and then an officer during WWII. Unfortunately, his war trauma triggered bipolar disorder, after which he was never the same.

Hallowell’s mother wasn’t much better. She suffered from alcoholism, as did Hallowell’s stepfather; together, they gave new meaning to neglect and abuse. Following the pattern of Hallowell’s biological father, one of Hallowell’s brothers becomes seriously mentally ill after a storied early career.

As for Ned, he tells readers about scoring an eight on the Adverse Childhood Experiences (ACEs) questionnaire — an inventory that measures exposure to childhood trauma such as neglect, abuse, domestic violence, contact with mental illness, and substance use in the home.

There but for the grace of God go I, says Hallowell. And, as a child psychiatrist, he would know.

Hallowell sums up the New England WASP triad that characterized his family and social status: “Alcoholism, mental illness, and politeness.” The first two are fine to overlook if a person is polite. From this ethos, Ned learned to be a caretaker at a young age and never stopped learning.

One wisely observed story with personal delivery and engaging prose follows another. But because his life was riddled with psychic pain, these tales can be tough going.

Hallowell went to boarding school at Fessenden, then on to Harvard College. Medical school was at Tulane, after Harvard med did not take him. There, at Tulane, he experienced southern culture and more importantly, NOLA, Charity Hospital, and caring for and living among the poor. This dose of life outside the Boston bubble served him well his entire career.

The second book soars and keeps getting better as Hallowell reveals more about becoming a psychiatrist, about the Boston psychiatric scene when he trained in the late 1970s, and about himself. No longer an abused child, he transforms before the reader’s eyes into a keen doctor who is full of passion, compassion, doubt, and determination.

I knew the scene in the Boston psychiatric community all too well, since I took my first job in Boston (and in the Harvard Medical community) in 1976 at Massachusetts General Hospital (MGH), and stayed for 24 years, with my last position as medical director of McLean Hospital.

Hallowell returned to Boston to take his residency at the Massachusetts Mental Health Center (MMHC), once the premier place to train. MMHC was the public mental-health hospital in the Harvard system. He did not go the MGH or McLean (which was the private, not-for-profit Harvard psychiatric hospital), which likely reflects his experience at NOLA.

Hallowell portrays the luminaries in psychiatry like a fine painter, with exacting candor and accuracy. Names like Semrad, Havens (my favorite, too!), Hobson (who challenged Freud with his work on sleep and dreaming), Schildkraut (who gave us the catecholamine theory of depression), Day, Salzman, Khantzian (Ned’s psychoanalyst), and others. These names may not mean much yet, but they will if you read this book.

We enter therapy sessions, community meetings (daily gatherings of all patients and staff on an inpatient ward), supervision sessions, and even Hallowell’s analytic hours. All ring loud and true to my experience in the Boston psychiatric and academic community. It was like watching my past unfurl on paper. The good, the bad, and the incredulous.

Hallowell is deeply respectful to patients and their struggles, and we thus read about mental illness from the perspective of a humanist with a tremendous capacity for empathy, an empathy that has been enriched and ennobled by his childhood experiences.

Hallowell himself now joins the above distinguished group of psychiatrists. He was among the first to identify and destigmatize Attention Deficit Disorder (ADD) in adults. His other accomplishments include opening treatment centers in four cities and authoring 19 books.

What is so remarkable about this book is how the author comes across as so personable and accessible. You can see why patients and families would trust Ned Hallowell, why they would so readily put what is precious to them in his healing hands. Plus, he likes dogs.

Lloyd I. Sederer is a psychiatrist, public-health doctor, and medical journalist. His new book is The Addiction Solution: Treating Our Dependency on Opioids and Other Drugs (Scribner, 2018).

All Joy and No Fun: The Paradox of Modern Parenthood

A parenting book that acknowledges the disappointments and drudgery that accompany the delights of raising children.