Be Frank with Me: A Novel

The story of a little boy with a big personality 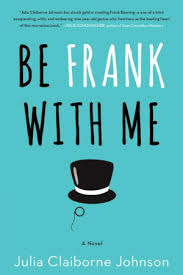 Readers, publishers, and critics sometimes forget that it’s okay to read purely for the fun of it. I first realized this when Harold Bloom, reviewing Harry Potter and the Sorcerer’s Stone, spent paragraphs trying to understand why people liked it. Have you ever heard of fun? I wanted to ask him. I, for one, am always looking for immersive, enjoyable books like Be Frank with Me.

Julia Claiborne Johnson’s debut novel follows Alice, an editor’s assistant, as she travels to L.A. to help a famously reclusive author, Mimi Banning, finish her long-awaited second novel. But it’s Mimi’s precocious 9-year-old son, Frank, who is the heart of this story.

“Staff? Splendid. It’s so hard to get good help these days,” the boy says when first introduced to Alice. “I am a devotee of film,” he tells us shortly after. “Of mathematics, not so much.”

In his seersucker suit, Alice observes that the child “looked like he’d been up all night, either policing the perimeter with his yellow bat or hanging off the back of a streetcar with Judy Garland, singing.”

Frank’s high-energy personality keeps the book’s energy high, too. Johnson shows us how endearing he can be, while also capturing the vortex of chaos that Frank carries around with him. Objects seem to destroy themselves as he approaches. Alice learns that violating Frank’s “rules” can induce rigid stroke-like fits, head-banging, and other outrageous behaviors.

The story is at its best when Johnson depicts the life of a single mother with a gifted child. “I have uncanny intuition unencumbered by the editorial reflex,” Frank tells Alice. “I heard Dr. Abrams explain it that way to my mother…My mother’s response was, ‘Where I come from we call that tactless.’” The first thing we hear Mimi says of her son is, “I go to sleep exhausted…I wake up tired.”

Several mini-mysteries are presented early and keep the pace of the book brisk. Why is Frank wearing a full suit and top hat on a public bus when we first meet him? How did his reclusive mother end up living in a glass mansion in L.A.? Who is Frank’s father? Who is the enigmatic Xander? Will Mimi ever write another book? Is Alice’s employer in love with Mimi?

There are a couple of minor stumbles in the book. The terms “autism” and “Asperger’s” don’t appear anywhere, which is odd for a novel set in 2010. Maybe that’s a deliberate choice by the author so that we set aside our stereotypes and try to see Frank as a complete person. A few minor plot threads are dropped. (Are there really no consequences of any kind when Frank stops going to school entirely?) A dénouement about Xander’s past appeared when I didn’t realize one was needed.

But no matter. I read the book twice and enjoyed it both times. You will, too.